Rich Piana, the world’s renaissance man of the 2010s, wasn’t in KILL IT mode all the time. While we saw many of his high-energy, pump-fueled highlights (such as in the Bigger by the Day series), the founder of 5% Nutrition also loved to relax and enjoy himself.

The only issue is that he often relaxed with the help of Ben and Jerry’s Ice Cream, which is great for some post-workout carbs, but not great for us mere lesser-sized mortals who can’t eat a tub a day and stay jacked. 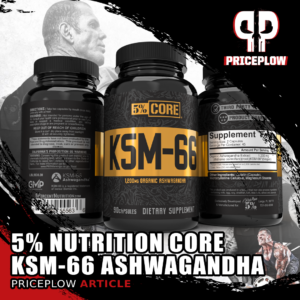 Need to reduce some cortisol? Then ashwagandha is your herb and this is your supplement

KSM-66 is a premier form of ashwagandha, the popular adaptogenic herb that helps reduce cortisol levels, regulating all kinds of downstream hormones. In this article, we cover many of the areas where this supplement can help, from cortisol and stress reduction to body composition improvements to increased testosterone and fertility to better mood and reduced anxiety. By reducing cortisol, it seemingly does it all!

Unlike many of the other supplements in 5%’s Core lineup, their KSM-66 is not boosted by a secondary ingredient. This is because 600 milligrams — what fits in one large capsule — is the clinical dose, and as we’ll cover in the research below, this ingredient doesn’t really need any support. It stands on its own.

It’s all covered below – but get signed up for our 5% Nutrition news alerts, there are some incredible releases on the way:

5% Nutrition’s Core KSM-66 Ashwagandha has one and only ingredient — 600mg of KSM-66 Ashwagandha! This is the world’s most studied form of the adaptogenic herb, made and sold by Ixoreal Biomed, who calls it “The World’s Best Ashwagandha”. They’ve run numerous research trials on it, and it has a very high number of quality certifications, which is why the industry has come to love and trust it so much. 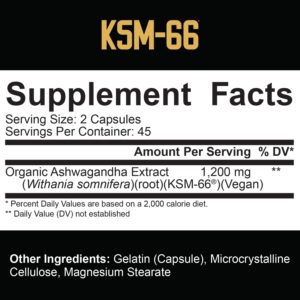 Most studies referenced here use 300mg twice daily. You can be like Rich and double that here!

Let’s dig into what you’re getting when you take KSM-66 ashwagandha — most of the effects revolve around cortisol reduction:

What is ashwagandha and what does it do?

Ashwagandha, also known as withania somnifera, as a plant that has long been used in Ayurvedic medicine, which started over 3,000 years ago in India with the practice of improving the “mind, body, and consciousness”.[1] There are many Ayurvedic herbs and roots (such as turmeric / curcumin), and alongside those, ashwagandha is one of the most prominent – with modern research backing up what it’s been traditional used for.

There are several health areas where ashwagandha leads to benefits — most of them revolve around cortisol control, so we’ll start there, and then get into its other downstream effects:

As noted in many of the studies, 600 milligrams per day is what’s used most frequently and successfully. Many of those studies employed 300 milligrams per day, but it’s more convenient to take one capsule. However, if you’ve got the budget, we aren’t against two capsules a day, especially for the bigger 5-Percenters out there who really need to come down a bit. 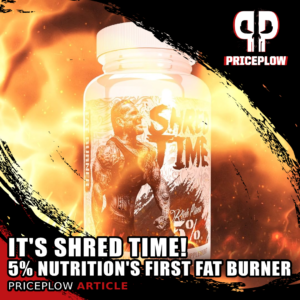 There are fewer better-trusted herbal ingredients in the supplement industry than KSM-66. It’s great to see that 5% Nutrition used it. One difference here, compared to the rest of their Core line, is that this is a single-ingredient formulation – no “helper” ingredient involved here. That’s quite alright, because 600 milligrams is the tried-and-true, tested dosage, and ashwagandha really doesn’t need much support from everything we’ve seen.

As mentioned in the fertility section, if chasing testosterone, hormonal, or procreation gains, 5% Core D-Aspartic Acid is a great stack here. But if you’re here for the weight loss support, look at the Stage Ready and Shred Time stack.

And one last thing. Sometimes, it’s great to simply have KSM-66 on hand, just in case you take a touch too much pre-workout and want to smooth it out. We’re looking at you, 5150 fans!!