Rich Piana’s BIGGER BY THE DAY Becomes a Muscle Builder 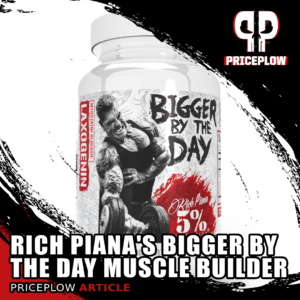 5% Nutrition actualizes Rich Piana’s Bigger by the Day into a muscle building supplement!

Legendary Rich Piana knew at least one thing for sure: only 5% of the people on this planet have the drive and passion to truly pursue and accomplish their dreams. He founded his supplement company, 5% Nutrition, with the aim of supporting those exceptional people’s attempts to achieve whatever they set out to do in life.

Although 5% Nutrition designs and manufactures a wide variety of products that help enable a wide variety of aspirations, there was probably nothing nearer or dearer to Rich Piana’s heart than getting f***ing huge.

Today we’ll be discussing a supplement that’s designed to help any serious athlete or lifter pack on the lean muscle gains.

BIGGER BY THE DAY? That sounds familiar…

It’s called Bigger By The Day, a name that may sound familiar because it was the name of an insanely incredible series of videos in late 2015 and early 2016 from Rich Piana:

In his series, he documented everything about his growth – with some videos (such as Day 14 embedded below) where he logged over 5 million views:

Bigger by the Day Muscle Builder

Back to the new supplement, which consists of a handful of carefully-selected and cutting-edge ingredients, Bigger By The Day has some direct anabolic effects, some anti-catabolic activity, and some support for general metabolic and hormonal health. Obviously, it alone won’t get you to Rich Piana size, but it may help you get over a few humps.

Let’s take a closer look at how it works after checking in on the prices and availability with PricePlow:

Bigger by the Day Ingredients

In a single three (3) capsule serving of Bigger By The Day from 5% Nutrition, you get the following:

The obvious stack choice here is Rich Piana’s classic creatine supplement, Crea-Ten. If you’re big on carbs, drive them in with Freak Show and don’t forget to sip on ALL DAY YOU MAY!

Get Bigger by the Day 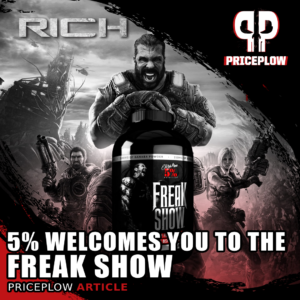 Love carbs and need to drive them home? Then join the FREAK SHOW

Overall, Bigger By The Day is a good supplement and worth the money, but understand that this alone will obviously not make you Rich Piana (and for most people, nothing will – Rich was nearly untouchable in that department). But for some natty size and strength increases, it may be able to push you past a plateau.

We would like to see a bigger dose of leucine since doses in the 200-milligram range are not typically studied in research settings. But since the main value of leucine is in its signaling activity, even a dose this small is probably of significant value. It’s also better than filling the rest of the capsule with rice flour!

One thing to keep in mind about leucine here is that it’s being stacked with one of its own metabolites — HICA. So the overall “leucine-driven effect” of the leucine and HICA is almost certainly much larger than 200 milligrams of leucine would suggest.