It’s been far too long since we’ve covered MyoBlox, the retail-savvy lifestyle & performance brand from the Bay Area that stormed the supplement industry in 2017 and 2018. They’ve reloaded some formulas, and there’s no better way to kick it off with Skywalk, their laser focus nootropic formula. 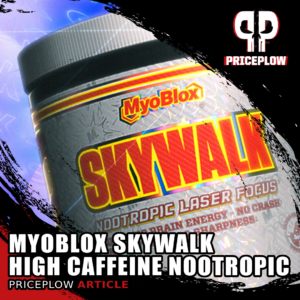 Tired of low-stim nootropic drinks? The new Myoblox Skywalk launched in early 2022 puts in plenty of caffeine, but keeps it smooth with a synergistic blend

If you’re looking for a nootropic supplement that doesn’t go easy on the caffeine, then you’ve come to the right place. Two scoops of Skywalk Laser Focus provides 400 milligrams of caffeine alongside a clinical dose of Nutrition21’s nooLVL gaming supplement ingredient. It’s paired with plenty of choline from Alpha-GPC, so you can stick somewhere between one and two scoops, wherever caffeine is appropriate.

We consider Skywalk to be the anti-gaming-supplement in ways – many of the other products with nooLVL are lower in caffeine. Skywalk brings laser focus in a high caffeine form factor, but has some helpers from mucuna pruriens and L-theanine to keep it smooth.

Below, we dig into Skywalk’s new panel, and will have our video below as well. Just note that there are multiple formulas out there, so check with retailers to make sure you get the one you want:

In a single one-scoop serving of Skywalk Laser Focus from MyoBlox, you get the following doses… with this one, you’re going to see us somewhere between one and two scoops for high-energy: 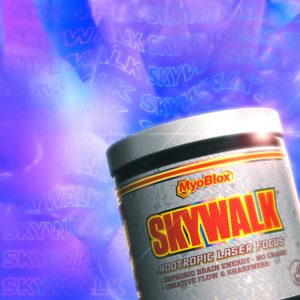 As for us, we’ll take Peach Rings!

Below are the Skywalk flavors available, but make sure you check the label to get the new version, if that’s what you’re looking for. Previous versions of Skywalk may still be out there (and if you loved them, then stock up while you can!)

Skywalk Laser Focus from MyoBlox is a smart little nootropic formula. NooLVL is really the centerpiece of this supplement and is doing most of the heavy lifting, but the other ingredients are all well-researched and have a distinguished history of use in modern nootropic supplements.

One interesting thing to think about with respect to NooLVL is how it might synergize with and enhance the delivery of other ingredients. Better brain flow should, theoretically, potentiate the cognitive effects of anything else in your supplement stack.

It bears mentioning one last time that if you want a clinical dose of nooLVL, you’re going to need to two-scoop it — putting you at 400 milligrams of caffeine. It is called Skywalk, after all!