Posted on March 10, 2020 by Mike Roberto | No Comments
Updated March 16, 2020: The flavor has been selected: White Monster has won the poll! Now we must name it, which will be selected on the PricePlow Instagram account (in our stories to be exact)!

…just don’t expect us to put our names on this one – it’s simply TOO STRONG!

The short story is that you get to pick and name the “User Choice Flavor” of SWFT Stims Stim Bomb ATOMIC pre workout supplement, and if your flavor and name are used, you’ll win a tub!

The longer story is below, but let’s get you signed up for alerts first:

Now for the longer story:

We were honored to have Connor, who runs manufacturing for the guys at SWFT Stims, let PricePlow Nation choose a custom flavor for their next pre workout supplement. They even offered to co-brand it with our logo on the tub! This has actually never been offered to us, so we jumped right into it with ideas.

“This pre workout is too strong to put our name on it!” 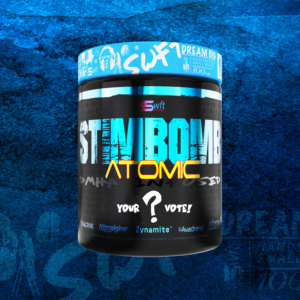 But after some thought, we realized something. The product is Stim Bomb ATOMIC, the upcoming “enhanced” version of the STIM-BOMB pre workout. And quite simply, it’s too strong for us – at least for Mike and Heather.

We decided that if we’re going to co-brand a supplement, it has to be one that all of us can use. Mike needs to be able to full-scoop it, and Heather needs to at least half-scoop it. This product is well beyond that!

But PricePlow Nation can still PICK and NAME the Flavor!

However… Mike had already posted about this on social media, and “the train has already left the station”. So instead, SWFT Stims is still using the PricePlow platform and audience to pick the next flavor — it just won’t be co-branded with us!

So now that you know the story… ladies and gentlemen… it’s time to select the Stim Bomb ATOMIC User Choice Flavor!

Suggest the name and win a free tub!

Even better – if we use the name you suggest (optional field at the end of the form), you’ll win a free tub! (US Only)