In the world of supplements, there are products marketed as fat burners that indirectly support weight loss… and then there are serious supplements that can help you oxidize legitimate amounts of fat.

This one is the latter of those two. A true-to-its-name, real-deal fat burner. It won’t be for everyone — it won’t even be for all of the brand’s target demographic. But if it’s for you, then look out, because it’s going to be strong. 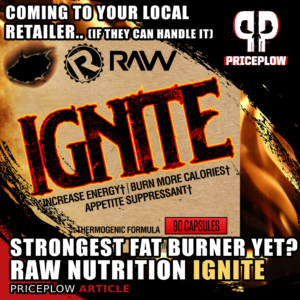 Strongest Fat Burner Yet? Tough to make that claim, but RAW Nutrition’s Ignite is definitely the strongest one we’ve covered!

On this blog, we’ve been honored to cover Matt Jansen and Dr. Domenic Iacovone’s two supplement brands, Revive MD and RAW Nutrition. One of the features of these brands that we continuously enjoy touting is the fact that the vast majority of their supplements are tested for banned substances for drug-tested athletes.

But not this one!

RAW Ignite is a fat burner that won’t be tested for banned performance-enhancers, because it has already-banned ingredients, as well as an ingredient so powerful that if it hasn’t been outright banned in all sports yet, it will be soon.

But not only does it break RAW’s mold, it breaks the trend of “fat burners” that don’t directly burn fat. Like all RAW Nutrition supplements, this one’s a powerhouse, so much that it’s likely only to be seen at your local retailer. If you like what you’re seeing, you may want to call them up and get it in stock there. But first, it’s best that you understand this ingredient label, because it’s coming strong:

Pack your moon bags and get ready to fly high with this one! Even if you think you’re an expert, you may want to start at one or two capsules, because the full three capsule serving (2.23 grams worth – these caps won’t be small) is coming strong with several lipolytic stimulants:

Now that is a fat burner. 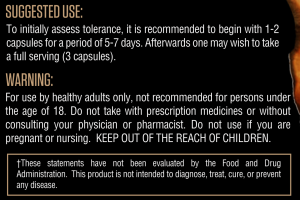 RAW Nutrition suggests a lower dose for up to a week before you should really dive in the deep end!

We said it many times, but we’ll say it again: start light. This is three capsules per serving, but you’ll be very wise to spread those out throughout the day, and not take one too late unless you want sleep to be affected.

RAW Nutrition suggests 1-2 capsules for an entire week before moving on to a full serving, so this bottle should definitely last you longer than a month.

Since this formula is so strong, we obviously do not suggest stacking this with RAW Burn, RAW Nutrition’s fat burning drink powder. But we do suggest you stack it with RAW Pump before training. 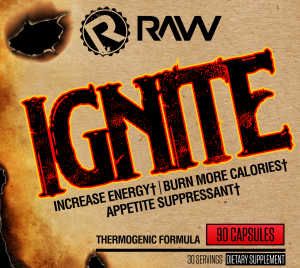 Pack your moonbags and prepare for lift-off! RAW Ignite is about as intense as we’ve seen!

So is it the strongest fat burner ever? We’re not so sure about that, but if it’s not, it’s gotta be close… and it’s definitely the strongest one we’ve covered in a long while!

While RAW Burn is an incredible appetite-smashing weight loss powder, every brand needs to consider a strong capsule based fat burner in their arsenal as well. With Ignite, they came out and smashed it out of the park.

We hope we’ve conveyed to you how strong this supplement is going to be. They not only went with three beta-adrenergic agonists, they went with high doses of them. So don’t be fooled by the two relatively benign ingredients up top – this isn’t your mom’s typical “green tea fat burner” that has some L-carnitine and a pinch of caffeine.

Raw Ignite is the “holy smokes” of weight loss supplements, and not everyone will be able to handle it. But if you can, then get over to your retailer and support some local business and prepare to blast off — RAW Ignite’s going to be a wild ride.