As you can probably guess from their name, Myprotein specializes in high quality protein supplements, but in recent years they’ve branched out into tons of other product categories. This is especially true with their Pro Range, which has product names that begin with the word “THE” (example: THE Whey and THE Pre-Workout). 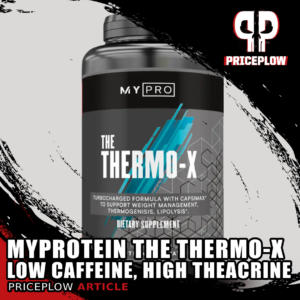 Myprotein THE Thermo-X is a unique fat burner with 100mg caffeine per serving, but higher doses of long-lasting theobromine and theacrine to pair with the thermogenic capsaicin!

Now, with THE Thermo-X, Myprotein is taking a stab at one of the supplement industry’s mainstays: fat burners.

At a time when the industry is moving toward brown adipose tissue (BAT) upregulation as the primary fat-burning strategy, Myprotein comes at you with something a little different THE Thermo-X kicks off with a huge dose of theobromine, a longer-lasting methylxanthine alkaloid, and pairs it with a huge long-lasting dose of theacrine. Then it follows those with 100 milligrams of caffeine per two-capsule serving and a bunch of appetite-suppressant ingredients.

So right off the bat, we can tell you that the stim-blend in here is going to be far different than what you’re used to with the average fat burner.

Before we talk about how it works, let’s check the PricePlow news and deals:

In a single 2-capsule serving of THE Thermo-X from Myprotein, you get the following: 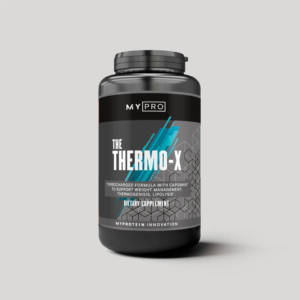 On one hand, THE Thermo-X’s formula is pretty straightforward – lots of work is done by appetite-suppressant ingredients, which obviously make it easier to eat less. On the other hand, it’s very unique — higher doses of both theobromine and theacrine and lower doses of caffeine will lead to a long-lasting but lower-stim effect.

But with lower amounts of caffeine in both this product and THE Pre-Workout, many users will be able to stack the fat burner and pre-workout from The Pro Range — something that is almost never a possibility from brands! So it’s pretty cool how this series turned out.

But also, there are a lot of anti-stress and sleep-promoting ingredients in here too, which we appreciate because it’s easy to overlook the crucial role that hormones and sleep play in establishing and maintaining healthy body composition.