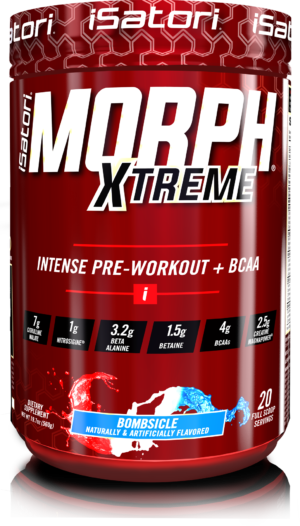 iSatori is jumping back in the headlines after releasing their new monster pre workout Morph Xtreme that’s bringing a whole lot of energy and pumps.

iSatori is a unique brand that went “all in” over the past few years on their bioactive peptide / colostrum supplement, Bio-Gro. While that was a hot seller, its inclusion in the now-defunct Pre-Gro and Pre-Gro Max didn’t generate as much buzz online, likely due to too heavy of proprietary blending.

In the meantime, we hadn’t heard much from the brand, but they have been at work, resurrecting an older product line. Back in the day they had a capsule-based pre workout named Morph, but it’s long been discontinued. Now iSatori has jumped right back on our radar with the release of Morph Xtreme.

This is a mostly open formula pre workout supplement that has almost nothing in common with Pre-Gro, Pre-Gro Max, or the original Morph — it’s actually well-disclosed and well-dosed, a few ingredients at the end.

The quick disclosure on the energy blend, though? 350mg caffeine and 3.2mg yohimbine alongside 7g carbs! So this one might be not be for the yohimbe-sensitive, but yohimbe-lovers should enjoy it because that’s 2x the ‘standard’ dose.

All the details on iSatori’s new monster pre workout are below, but before we get there, take a moment to check the best deal and sign up for alerts from PricePlow:

Morph Xtreme is packing a massive scoop size chock full of ergogenics that will significantly boost energy, focus, pumps, and motivation. Provided you can handle the 350mg caffeine per scoop, you should be in store for quite an amped up training session.

The primary energy and focus you’ll get from Morph will come from the previous “CORE” matrix, this might add a dash extra, but nothing too overwhelming. It’s possible you’ll feel the theacrine, but the only way you’d get enough of a dose of that is to have everything below it is minuscule. So don’t bank on the Ashwagandha or tyrosine to do anything.

The best possible case here is that glucuronolactone is small enough to get a good dose of theacrine, but after that, you’re going to be nearly out of room. If you can get 50mg out of the first three, consider it a win, and chalk the rest up to the fairy dusting Gods.

Given the pump side of things, this is still an exciting formula from team iSatori though!

Seeing the considerable step up in quality from iSatori with this newest product, we had to reach out to the brand and see what went into creating Morph Xtreme:

”“With MORPH XTREME, we wanted to deliver a formula that was a quantum leap beyond the norm. We identified the perfect workout as having seven components including: 1) Energy, 2) Focus, 3) Pump, 4) Strength, 5) Recovery, 6) Muscle and 7) Endurance. The strength of the MORPH XTREME formula is that is does not compromise in any of these areas – the formula is complete and powerful. We’re incredibly excited to usher in a new era of pre-workout/performance supplementation that can be used by focused lifters and athletes in all disciplines.” 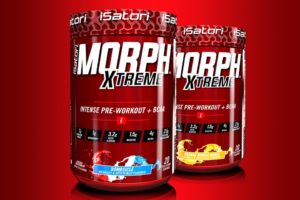 Morph Xtreme is launching in two delicious flavors — Bombsicle and Orange Mango…two of our favorite flavors.

When Morph Extreme launches, it will be available in two flavors: Orange Mango and the current darling of the industry Bombsicle. Additionally, flavors may be in the works, but we’ll have to wait for confirmation on that from iSatori.

iSatori may have been off our radar for awhile, but if Morph Xtreme is any indication of the direction the brand is currently going, then we better start paying a little more attention to what these guys are doing again. We never saw a huge purpose of putting Bio-Gro in everything, we wanted stuff like higher citrulline doses and more aggressive stims.

Overall, Morph Xtreme will be ideal for those looking for high energy and monster pumps but don’t want to mess with “more aggressive” stimulants or PEA agents. iSatori instead brings in a more serious yohimbe dose, which will be polarizing, but we think it’ll feel great.