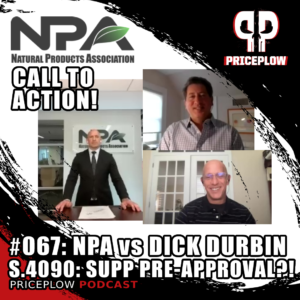 A bill (S.4090) introduced by Senator Dick Durbin would require PRE-APPROVAL from the FDA for all dietary supplements. Led by Dan Fabricant, Joe Weiss, and Doug Kalman, The Natural Products Association (NPA) is fighting back.

On April 26, Senators Dick Durbin (IL) and Mike Braun (IN) proposed a bill titled Dietary Supplement Listing Act of 2022,[1,2] which would have serious ramifications on the way business and commerce is done in the dietary supplement industry.

We invited a powerhouse team of industry veterans and experts to discuss what this bill would mean for the industry:

The discussion centers around the text of the bill, and how its subtle wording would effectively create a situation where supplement manufacturers would require pre-market approval in order to enter the marketplace, otherwise they’d be deemed misbranded and subject to legal action.

The Natural Products Association is the leading trade association for dietary supplements, known for its strong lobbying presence in Washington D.C. It acts as an industry watchdog on regulatory and legislative issues.

If you’re against this bill, then see NPA’s Voter Voice page and compose a message to your representatives:

Want to keep abreast of our future updates on this bill? More content is coming, so sign up for our “Dick Durbin” alerts and you’ll get notified of future articles, videos, and posts: