NutraBio has been a leader in the nutritional supplement industry since 1996, and as they continue to expand and grow, they still stick to their values of transparency, honesty, quality, and care for their consumers and community. 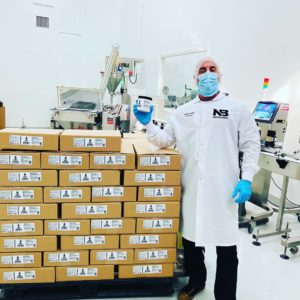 Mark Glazier, CEO of NutraBio, has been doing everything he can to help get First Response into more front line workers’ hands!

Unlike the majority of other supplement companies on the market, NutraBio has their own manufacturing facility to ensure every ingredient, product, and raw material they use passes strict regulations and standards. Mark Glazier, CEO of NutraBio, realized early on that various large scale contract manufacturers cannot be trusted, therefore he decided it was best to open his own facility that operates without compromise, as explained in The NutraBio Story.

NutraBio’s FDA registered and inspected GMP state of the art manufacturing facility is located in Middlesex, NJ. They’ve been there for nearly 20 years and have built an incredible reputation within the industry and community. NutraBio is always looking for ways to give back as much as possible because they value the support from each and every person.

Therefore, when COVID-19 hit the Tri-state area in early February, NutraBio decided to take action and use the resources they’ve obtained over the years to create a free product that would help out those brave individuals on the front line, who are at some of the greatest risk.

The recipients of this donated supplement included any first responders, such paramedics, police offices, military personnel, doctors, nurses, and firefighters. The product was named “First Response”, and consists of a simple yet effective blend of ingredients that are clinically shown to support the immune system.

“First responders are putting themselves and their family’s lives in danger every day by serving on the front line of this pandemic. They are all true American heroes, and NutraBio believes we have an obligation to help and support them as best we can. I’m proud that we manufacture our products here in the United States and prouder to be able to serve our nation in this great time of need.” 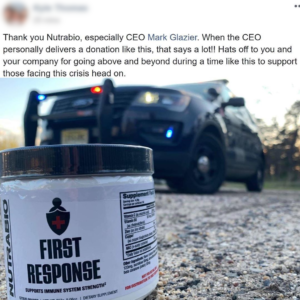 The outpour of Thank You notes to Mark Glazier and NutraBio for First Response was massive!

Although NutraBio had to implement several changes in their manufacturing facility to make this happen, they were able to remain open while several other businesses were forced to shut down since the Department of Homeland Security classified dietary supplement companies as an “essential business”.

This allowed NutraBio to allocate resources towards producing First Response and manufacture thousands of bottles to donate to the community of New Jersey.

We have a lot more information on First Response down below, but if you want to keep up with everything NutraBio has going on, then make sure to sign up for their news and deal alerts! 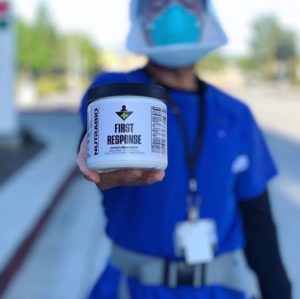 Mark wanted to make sure nearly anyone could use this product, so you’re not going to find any ingredients that people may be allergic to, such as herbs or botanicals. Therefore, First Response mainly consists of some key vitamins and minerals that help give your immune system some extra resources to help fight off pathogens.

Remember this product is not for sale, but we still want to highlight how NutraBio always uses fully disclosed labels, even down to the flavoring, which is extremely rare in the dietary supplement industry.

Furthermore, NutraBio is one of the only companies that posts third party lab tests online, to give their consumers peace of mind that what’s on the label is in the bottle. Despite all of the industry trends that various supplement companies latch onto, NutraBio sticks to their guns and always does things the right way or not at all. And First Response is an incredible product to showcase what NutraBio is all about!

Vitamin C is a potent antioxidant and well-known immune booster which helps defend against pathogens and protect your cells from oxidative damage.[1] Vitamin D3 is also crucial for proper immune function and vitamin D deficiency has been linked to an increased risk of several medical conditions including depression, respiratory tract infections, and a multitude of other diseases.[2-4] If you don’t get very much sunlight exposure vitamin D supplementation is highly recommended.

As you can see from the label, NutraBio specifically notes that they use zinc bisglycinate chelate and copper bisglycinate chelate from Albion Minerals, but why is that important? Due to various reasons, some minerals don’t get absorbed by the small intestine very well, therefore by binding the mineral to something that is readily absorbed increases the ingredients’ bioavailability. 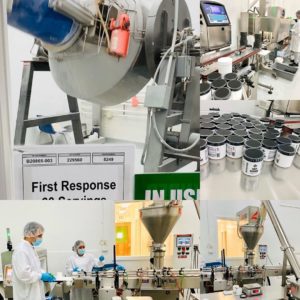 In this case, the zinc and copper are bound to glycine, an amino acid that the body can easily uptake. This is one of the ways NutraBio stands out, because they always use the highest quality minerals available for superior absorption and results.

Research shows that zinc improves immune system function by promoting the proliferation of T-cells, also known as white blood cells.[5] T-cells are crucial for taking care of foreign invaders before they wreak havoc on your healthy cells.

The last ingredient in First Response is the supplemental form of the semi-essential amino acid cysteine, called N-acetyl cysteine (NAC). Research shows that NAC enhances the synthesis of an extremely powerful antioxidant within the body known as glutathione. This antioxidant powerhouse has been shown to boost immune system function, defend against oxidative stress, decrease cellular damage, and may even promote longevity![8,9]

Although First Response is not available for purchase, all of these ingredients can be found in Immune, check out this article for more information: NutraBio IMMUNE: All-In-One Immune System Support Supplement!

It’s important to note that Mike received a bottle from the first batch, which contained zinc citrate instead of the superior chelated zinc from Albion that you see on the label above. This was because the ingredient was temporarily out of stock, but the second Mark and the team could get it in and improve First Response, they switched to it.

As part of NutraBio’s First Response Initiative, they’ve donated masks, hand sanitizer, and protein powder along with nearly $350,000 worth of immune support dietary supplements. While NutraBio was busy helping out the community and their customers, another huge name in food manufacturing, Essex Food Ingredients, began to acknowledge what NutraBio was doing.

They reached out to Mark Glazier and decided it would be a great idea to scale the First Response Initiative to an even greater level. Essex Food Ingredients donated $5,000 to help expand NutraBio’s efforts.

“Words cannot express how grateful we are to first responders during this critical time. Thank you to all doctors, nurses, police officers, paramedics, firefighters, and military personnel. You have given your all to protect our families, colleagues, friends, and neighbors! Essex Food Ingredients is proud to donate to this extraordinary endeavor.”

The entire NutraBio team was thrilled to hear that Essex Food Ingredients reached out to help support the cause. This just goes to show that well known companies in a completely different industry were recognizing the incredible work NutraBio has been doing over the past few months. 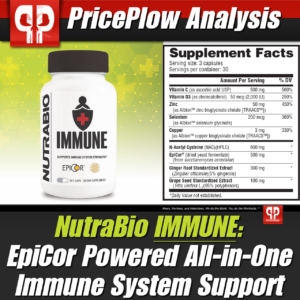 NutraBio Immune is the capsule-based product consumers can get if they’re not eligible for First Response!

Mark was just thankful that his company was able to remain open and could serve thousands of first responders as well as their loyal customers. Although the First Response is not for sale and only available for donation, NutraBio also produced several high quality immune support supplements, such as EpiCor, Immune, and Lungs for people who want to do everything they possibly can to remain healthy (on top of a clean diet without ultra-processed foods and plenty of sunshine, exercise, and social support).

Further, what started as a local initiative to help out the community of New Jersey, has now gone nationwide! NutraBio will continue manufacturing goods to donate to first responders for as long as possible. Although NutraBio’s team doesn’t consist of doctors, nurses, firefighters, paramedics, or police officers on the front lines, they found a way to help out those in need and that’s quite an impressive feat. 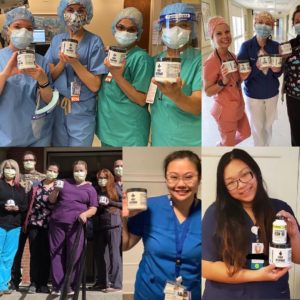 First Response is getting into the hands of healthcare workers nationwide!

This is just one example of how NutraBio separates itself from the rest of the brands in the industry. Because even when times are tough, they find a way to make things a bit better. We commend Mark Glazier and the rest of the NutraBio family for stepping up to the plate and essentially, risking their lives to produce phenomenal products for first responders and customers.

As of writing this blog post, NutraBio has donated products to over 10,000 individual first responders and hundreds of police stations, firefighters, hospital workers, paramedics, military units, and various other organizations. As you can tell, when NutraBio does something they fully commit and go all out.

PricePlow thanks NutraBio for their contributions to the area

It’s amazing to see NutraBio take the majority of their resources to do everything they can to help out during a scare like this. It just shows how NutraBio is more than just a sports supplement company. They’re on a mission to make a difference, whether that’s in their local community or thousands of miles away on the West Coast. PricePlow wants to thank Mark Glazier and every NutraBio employee for making this happen. 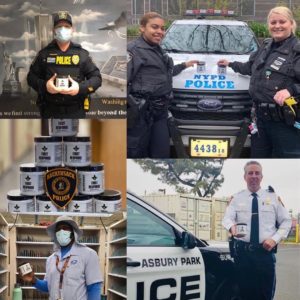 NutraBio First Response is getting a lot of love from police officers!

NutraBio has been one of PricePlow’s top companies ever since the companies bonded in 2014 over our mutual disdain for a protein scam known as “amino acid spiking“. We can always count on NutraBio to make top notch supplements that feature efficaciously dosed ingredients backed by plenty of research. NutraBio refuses to take shortcuts, and it’s definitely paid off. Since day one, Mark Glazier and his team have been in it for the long haul, therefore the last thing on their minds is making a quick buck with a cheap supplement that fails to deliver results.

If you ever visit Middlesex, NJ, feel free to stop by NutraBio’s headquarters once the governor loosens the restrictions and the company can take visitors, because they have nothing to hide and are always open to letting actual customers tour their state of the art manufacturing facility. We challenge you to try and find another supplement company with as much transparency, honesty, and efficacy as NutraBio. We would argue that nobody even comes close to what they’ve built over the years.

NutraBio has a lot more planned for the rest of 2020 and beyond. Subscribe down below to stay up to date with a leader in the industry!