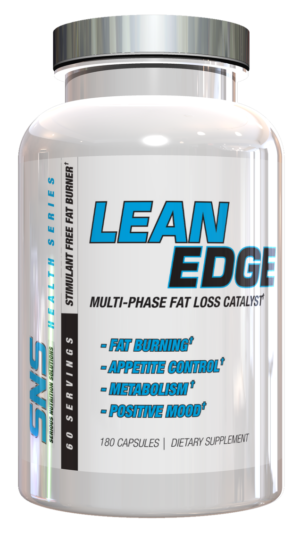 Stimulant free fat burners represent a very unique, but challenging segment of the supplement market. Many of us love stimulants for their ability to boost mood and energy while suppressing appetite, especially earlier in the day. So encountering a stimulant-free fat burner that’s embraced by the entire public is a rare occurrence.

SNS, long regarded as one of the top quality companies around, has created a stim-free weight loss aid that has garnered quite the following in some circles and stores online.

We’ve got more info ahead, but first, take a moment to check the best deal and sign up for alerts from PricePlow:

Lean Edge uses some of the most frequently encountered stimulant free fat burning ingredient around, but puts them all in one product with the highly-tested standards we’ve come to trust from SNS. The difference between Lean Edge and the rest of the stim-free fat burners around is that SNS believes they’ve used more effective doses than the competitors you’d find at your general local store.

Note: Doses listed below are based on 1 serving (i.e. 3 capsules)

Stim free fat burners aren’t what we typically cover on the blog as there’s some dispute to their effectiveness or usefulness, so we reached out to SNS to see what their thinking was on the formula, and why they included certain ingredients like Green Coffee Bean Extract or Raspberry Ketones:

”Using ingredients that have scientific backing is important, but it’s also important to use ingredients that have good real world feedback behind them as well. In some cases, things may look great on paper or great in certain controlled studies but that may not translate into good real world results, and vice versa. These two ingredients gained a lot of popularity when they were mentioned years back on the Dr. Oz show. Part of this popularity though was that it led to unrealistic expectations. Many people started regarding them as these miracle ingredients that they thought they could take and still eat however they wanted to and not workout and lose weight; and that just isn’t the case with much of anything. The thing that a lot of people may not remember or realize though is that even before that, Raspberry Ketones were well regarded for stimulant free fat loss purposes and were included in some of the most popular and effective stimulant and stimulant free fat burners. SNS already had RK-125 and RK-500 Xtreme out long before Raspberry Ketones were mentioned on Dr. Oz and they sold well and had good feedback on them.

As for their inclusion in Lean Edge, even if these two ingredients weren’t in there, it would still be an extremely comprehensive stimulant free fat loss product at an excellent price. Lean Edge is priced so aggressive by SNS that even if these weren’t included, the formula wouldn’t cost any less (we absorb the cost on our end of the margin) so for people that aren’t convinced, consider them freebie ingredients. But also think of it from our side, if we didn’t think they added to the product in terms of potential results, it would be more profitable for us just to leave them out.

Consume 1 serving (i.e. 3 capsules) prior to your first meal of the day for enhanced fat burning without the stimulants.

Being that Lean Edge is free of stimulants, we contacted SNS HQ to see if they had any recommendations as far as stacking Lean Edge with a stim-based product:

”Lean Edge is a great, comprehensive stimulant free fat loss product. For people that want to add stimulants to it, SNS offers a variety of options that it can be stacked with. Lean Edge makes for a great daily stack with Focus XT, which has some great fat loss benefits of its own, and can also be stacked with SNS Alpha Yohimbine Caps or even SNS Caffeine tabs. For those that want to stick with totally stimulant free but are looking for other products to stack Lean Edge with, it makes for a great stack with SNS Reduce XT &/or TTA-500.”

When you’re down to use stimulants, you’ll probably get more effects out of a stim-based fat burner. But for those who still want an extra edge in the quest to torch fat for good, or don’t to touch stims during certain times of the day (or ever), SNS Lean Edge represents a quality option that can be used as a standalone or stacked with your favorite stimmed burner.