SMRTCoffee is Coming! High-Focus Low-Carb Coffee on the Go!

There’s a growing segment of the population who have realized the wonderful health and cognitive benefits of a low-carb, high-fat (LCHF) diet. This includes (but is not limited) to all of the ultra low-carb dieters out there.

But while the LCHF market’s been growing by leaps and bounds, the retail industry simply hasn’t been keeping up — especially when it comes to coffee on the go and cognitive focus beverages. Today we combine all three of these:

Let’s say we’re a coffee junkie on the road and didn’t have time to brew a batch before leaving. What are our options? 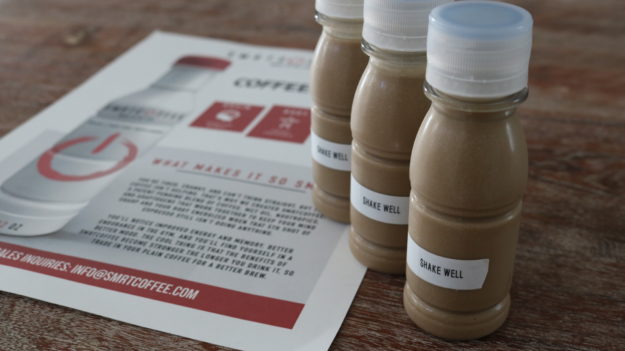 Now here’s a real option. Developed by startup SMRTco, SMRTCoffee is a brilliant take on the ready-to-drink coffee market! (Note: These images are all beta test bottles)

At your local coffee shop, if you want added fat, you’ll need to ask for a hodge-podge of coffee, cream, and possibly even a pad of butter (ugh no thanks!!). Your local supplement store has some cold low-carb beverages in the fridge, but there’s no added fats or focus ingredients and they’re loaded with artificial colors and sweeteners.

And at the gas station or convenience stores, there’s plenty of ready-to-drink bottled sugar bombs disguised as coffee, but literally nothing marketed to those of us who see through that blood sugar trap. Even if you pour your own cup of joe, their coffee creamers are nothing but liver-toxic high fructose corn syrup!

Guess we’re having black coffee and bacon jerky once again… or we’re stuck bringing Trader Joe’s coconut oil packets everywhere. And we’re still not getting any cognition or anti-anxiety benefits available to supplement users out there. What a sad mess.

Not so fast! Meet SMRTCoffee and Wake Up Better

Realizing this growing market segment has been long underserved, a young startup out of New Jersey named SMRTco decided to do something about it. They created SMRTCoffee, a ready-to-drink coffee catered to the low-carb crowd… with added focus and stress-relief ingredients!

The product is coming in early 2019, but I had a chance to get a pre-release beta sampling and learn a bit about the ingredients. To say I’m excited is an understatement – we’re dealing with three of my favorite things that have never been put together:

Before we head into the ingredients and their benefits, take a look at my beta tasting video!

While we don’t have a full label just yet (we’ll update this post when it’s out), we’ve been told that everything listed below is at a clinical dose. In order to make that work, some patent-pending technologies were used to get the nootropics to mix and taste good, so we’re excited to learn more about those.

Let’s start with the star of the show:

Now if that isn’t a beautiful profile — especially for a ready-to-drink bottle — we don’t know what is! Between the focus, the energy, the mood, and the endurance support, we can’t ask for much more in a profile – we’re just excited to see the final label. SMRTco did say that everything inside had clinical research backed levels though!

SMRTcoffee was designed for those who want an artisanal style coffee, like something you’d get from a great coffee shop. This means no added sweeteners!

All that’s been added is an emulsifier for the MCT that helps everything stay blended together – including the ultra-fine bacopa monnieri that we’re so excited about! 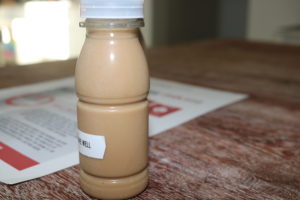 No Sweeteners… and it’s still no problem!

Our take is that a sweetened version should eventually become an option if there are enough requests for it, but if you must have sweeteners, you can always add your own flavored stevia in the meantime.

Conclusion: A solid idea we hope to see executed properly

Truth be told, a high-fat / low-carb coffee on its own is something the growing market could utilize, even if it just takes up a single row in the refrigerator section.

But adding all of these anti-anxiety, pro-mood, focus-driving nootropics and adaptogens to the profile? Now we’re really talking! If everything is dosed well, this will have your standard coffee drinker – and even your standard LCHF dieter – wondering how something can feel so good. And that’s the beauty of these ingredients that are so often overlooked by “normal” coffee and energy drink fans.

SMRTco is seriously on to something here, and we hope it works out well, because there’s a lot more that can be done for this market, and we’re only scratching the surface on some of the things they should be able to do!

You can sign up for SMRTco news alerts below to get contacted when it’s ready to go!