This one’s been a long time in the making. Revive MD‘s revolutionary takeover of the health supplement industry has been one of the greatest phenomenons over the past couple of years, with incredibly-formulated health-specific supplements like Revive MD Kidney, Revive MD Glucose, Revive MD Liver, and far more covered in our Revive MD news page. 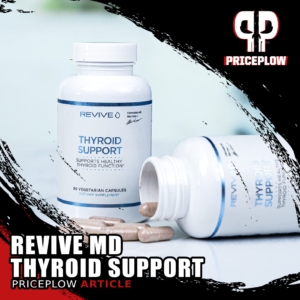 There’s one organ/gland, however, that they hadn’t yet approached entering into spring 2022, and it’s one that’s critically important to the body’s metabolism: the thyroid. If you’re looking to maintain healthy thyroid hormone levels and a solid metabolic rate, then this is one worth investigating:

When it comes to choosing a supplement that will help relieve symptoms of poor-functioning thyroid, there are two questions you want an answer to:

As we discuss in our analysis of Revive MD Thyroid Support, most of the ingredients in this formula do both. Let’s check prices powered by PricePlow, and then get into the weeds. The article below is complex, just like the gland itself:

In a single 3-capsule serving of Thyroid Support from Revive MD, you get the following:

Take three capsules per day (taken at once or split throughout), with or without food.

Blood work is key (this is why Revive MD can help with blood work too). Speak to your primary doctor if you’re on medication, and decide if this could interfere or force adjustments to your medicine.

Conclusion: Keep the thyroid operating at an optimal rate 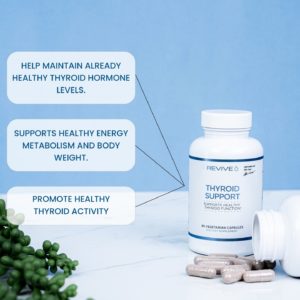 On the research side, Revive MD dove deep into the subject of optimizing thyroid function, deeper than we’ve ever seen a manufacturer do before. However, this 9.5/10 formula would be perfect if they just opted for the most bioavailable forms of vitamins B12 and A – methylcobalamin and retinol — rather than cyanocobalamin and beta-carotene.

With that said, we’re extremely bullish on the inclusion of bovine thyroid gland powder, and love how it’s paired with pituitary powder. This is going to be novel to the vast majority of users who’ve never tried such a supplement or haven’t had organ meats (which generally aren’t sold with these glands inside either).

And sometimes, it’s as simple as getting enough iodine in and enabling its uptake, something Revive MD has here as well. This one’s been a long time in the making, and now that it’s out, we can see why the process took so long — it’s not a simple supplement, but it’s a powerful one.

Get your blood work, monitor closely, and be at your best.