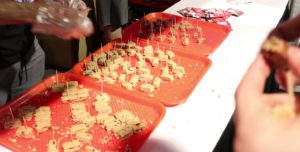 Mike tests out the MTS Outright Bar at the 2018 Mr. Olympia

Over the years, protein bars have drastically changed in texture, taste, and profile. They were first released in 1986 when they were released commercially as “Power Bars”.By the late 90’s and early 2000’s,Clif Bars made the “energy bar” market, Atkins and Universal attacked the low-carb market, Met-RX and Pure Protein had several interesting offerings, but things remained relatively stagnant until Quest Nutrition spearheaded a new craze for protein bars using isomaltooligosaccharide in their Quest Bars by claiming it was fiber, but we now know that the FDA does not consider IMO a fiber.

Where are protein bars right now? 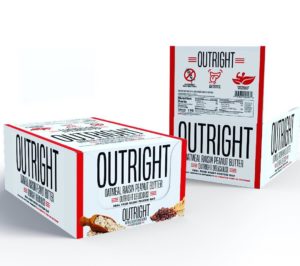 Many companies are moving away from the aforementioned IMO (which we call a “fraudulent fiber”), and we’re seeing a ton of bars loaded with prebiotic fiber (one that stood out to us was 5% Nutrition’s Knock the Carb Out bar) or tons of glycerin, a sugar alcohol. Some standout bars like PEScience’s Select Protein Bars take a bit of everything and go for pure texture, while Redcon1 took a left turn by mostly avoiding whey in the MRE Bars (5% Nutrition’s bars mentioned above are also dairy-free). The Animal crew went after their core demographic with the beastly Animal Snak Bar that’s whole food based and nearly 400 calories!

Who do you call to cause a disruption?

But what if you want to get away from IMO, sugar alcohols jack your stomach up, you like the profile that whey protein brings, and you’re not a believer in too much prebiotic fiber? There’s a man with a plan.

Who better to disrupt a market than the disruptor-in-chief himself, Marc Lobliner? 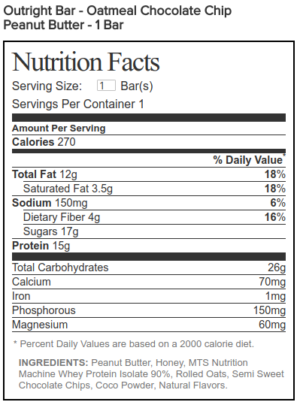 Count em! SEVEN whole food ingredients, and the other flavor has SIX!

The man behind MTS Nutrition is joining the group and releasing his own contender in the protein bar world called the Outright Bar. The bar features no prebiotic fiber or glycerine, which can cause bloating and GI distress in larger amounts. Similar to the Animal Snak Bar, Lobliner’s protein bar will be made with honey, oatmeal, and peanut butter. In an era of protein bars with 50 ingredients, this is the complete opposite – we’ve never seen a protein bar with so few ingredients!

The MTS Outright bar launched at the 2018 Olympia Expo in Las Vegas, and we got to have a taste test. It’s indeed unlike anything on the market, and is PricePlow approved if you’re into peanut butter, oats, honey, and whey!

As the supplement market ages, we’ve seen companies deviate their protein bar ingredients from high amounts of processed sugar to whole food ingredients and natural sweeteners. We have 50-ingredient bars, and now we have a six ingredient bar. Consumers can appreciate the switch to naturally made ingredients from a micronutrient and digestion standpoint. Keep your eyes on PricePlow alerts for specials on the top-selling bars in the industry.