Optimum Nutrition released an upgraded version of their flagship product, AmiNO Energy, two months ago in July of 2018. Upon the doors opening of the 2018 Olympia, they have officially joined the carbonated energy drink market with AmiN.O Energy + Electrolytes.

This definitely came as a surprise, but we have seen many companies jumping into the carbonated market, following the revolution set in place by Bang. It only makes sense, especially when ON’s other Glanbia-owned partner company, BSN, has BSN EndoRush cans, which are downright phenomenal, but way higher in caffeine.

A lighter energy drink can 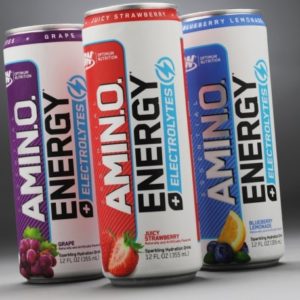 Optimum Nutrition is joining the ranks of companies putting out energy drinks. These flavors don’t look like they’ll disappoint!

The AmiN.O. Energy + Electrolyte RTD features a common formula from the powdered version of AmiN.O Energy + Electrolytes that dropped in July of 2018. What we do know about these new carbonated RTDs is that they contain 5g of amino acids (coming from mainly threonine, leucine, citrulline, and more), around 400mg electrolytes for hydration, and 100mg of caffeine – obviously a lighter dose of caffeine.

While the caffeine content may be low compared to the C4, Bang, ProSupps Mr. Hyde Power Potion RTD, and Repp Sports Raze energy drinks, this is marketed as a recovery drink with a minor amount of caffeine.

Stay tuned to PricePlow for more!

You can sign up for PricePlow’s Optimum Nutrition news and deal alerts below to get notified when new price drops, coupons, and flavors come out. These carbonated recovery cans initially will come in four different flavors: Grape, Lemonade, Blueberry, and Watermelon – blueberry grabs our attention at first since most RTDs don’t have that flavor.

Optimum Nutrition has dominated the international market for such an extended time that it won’t be long before this product takes off… if enough consumers are still cool with 100mg caffeine anymore these days!

Note: The price widget above will show the powdered product as Servings and the carbonated RTD product as Cans.