Instant Knockout Fat Burner: Is this Worth $59??

After doing some analysis, we’re starting to wonder if this product’s packaging was more expensive than the raw materials inside! Keep reading to learn about the ingredients behind this hyped up fat burner.

When doing some research to keep our Best Fat Burner buyer’s guide up to date, we kept running into one product over and over: the Instant Knockout fat burner.

We’ve been running PricePlow (our supplement price comparison engine) long enough to know when something’s amiss, and this one was setting off a few of our alarms.

When just a few blog posts mention something as a great product, that’s fine. But when dozens of sites that we’ve never heard of all rave about a new product being the absolute best — doing everything in their power to get you to go to the same site to buy it for $59 (twice the industry standard price of a fat burner) — red flags start to fire off.

All the worse when you try clicking the Back button on some of those sites, and they don’t let your browser leave…

Something’s fishy with these websites…

After bumping into a few too many of these sites, it was time to investigate. What is this Instant Knockout supplement, why is it so expensive, and is it worth it?

As always, the best way to do that is to analyze the ingredients. After that, we’ll dig back into the marketing and pricing and try to explain what’s really going on here.

This article is long. The short story is that:

Now for the details. 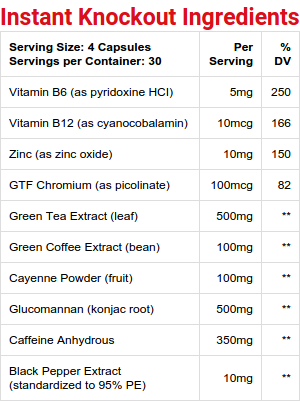 The Instant Knockout supplement facts / ingredient label is an “open” label, but be careful of the serving sizes and lack of extract standardization information.

Normally, when we see dozens of generic blogs hyping a product, it’s next to impossible to find an actual ingredient label. That’s not the case with Instant Knockout — to their credit, it’s available with just one click and a few pages of scrolling.

Further, this is an “open formula”, which is refreshing to see as well — we know how much of each ingredient we’re getting here, so we can look at the research and see if the dosages are beneficial and clinically-verified.

However, you’ll see that this still isn’t enough information, because not all ingredients are the same, and we need to know extract strength.

You can see the label up to the right. We’ll analyze the ingredients one-by-one, with sources cited in our References section at the bottom. The vitamins and minerals are discussed at the end, so that we can get right to the meat of this product:

As you can see, we have a lot of concerns regarding ingredient quality, extract strength, and the doses.

This is newfound territory for a product so heavily marketed online and with such a large price tag. While we’re happy that it’s an “open formula”, it’s not nearly open enough — with practically every ingredient, we’re either subjected to a lack of useful information, or we’re getting the cheaper form of the ingredient.

This concerns us given the price tag, so let’s take a look at each individual ingredient and see if we can put together something equivalent (or better) with off the shelf ingredients for a lower price:

Is this worth it? Analyzing the cost

Can we build our own for cheaper, using nothing but off-the-shelf products from PricePlow? Not only can we… we do it better

To build our own version of Instant Knockout, we need to get 30 servings here. What you’ll see is that most of the time, we’ll get 2x or more, often in better ingredient dosages too – but wait until you see the prices!

The prices quoted were those found using PricePlow on August 15, 2015, and are subject to change.

…in off the shelf components – nearly half the price of Instant Knockout!!!

Without the markups and higher doses, you can imagine what these raw materials cost when shipped directly to the supplement manufacturer – very, very little!!

We’re starting to wonder if this product’s packaging was more expensive than the raw materials inside!

In fact, one could argue that the Instant Knockout bottle itself costs more than the actual raw ingredients inside of it!! This bottle is an interesting-looking clear plastic fist, representing the “knockout”.

While that’s certainly cool, we prefer that the effort of a supplement goes into what’s inside of it, not the packaging.

Finally, note that we don’t suggest you go and buy all of these ingredients. Although none of them are bad, they’re not even everything we’d include in a fat burner were we to make our own! We’re just trying to show the real-world costs here.

So why does it cost so much?

It doesn’t take a lot of guesswork to guess what’s really going on here. At these prices, someone’s making a lot of profit at your expense.

But one thing you do need to know is that all of the spammy “best fat burner” websites are highly incentivized to get you to buy it.

How well are they incentivized? The brand that owns this product currently promises online marketers the following: 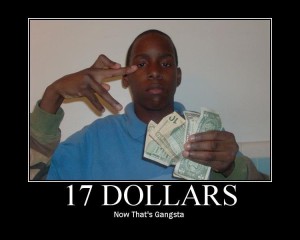 Someone is getting paid about this much every time they can convince some poor soul to buy Instant Knockout.

So, a $59.99 bottle of this will yield someone basically $18 in commission — per bottle! At this point, you need to ask yourself: if you’re buying a $59 product where someone is paid $18 to sell it to you, should you necessarily trust their intentions?

All we can say is that we feel sorry for the 7% of people who’ve visited that site and actually bought the product before we were able to do the research and write this article.

Some fair disclosure here is due: PricePlow also works in this same manner – just at a far lower commission. For instance, when we send you to Amazon to buy a product, we get anywhere from 4-8% (depending on the product). Meanwhile, we also do our best to send you to the lowest-priced deal (thus lowering our commission made).

So if you want to criticize the pot for calling the kettle black, so be it, but we at least do what we think is right, and with that comes a generally lower profit.

Sadly, it could be far worse

At least it’s not the worst fat burner out there… and it isn’t a “rebill” scam where your credit card gets charged over and over and over after signing up for a “free trial”. So life could be worse. But this still isn’t right, and now you know why.

The point is, this is actually not the worst product in the world, but the label simply lacks too much information and the cost is egregiously high, mainly due to the questionable marketing tactics used to sell it.

Maybe some day Instant Knockout will go on sale at more retailers like Amazon and GNC at a reasonable price – and by reasonable, we mean less than $20 for what we’re getting here. After all, if we can build nearly twice as much of it for almost half the price, there’s clearly a lot of wiggle room.

Put simply, situations like this one give the supplement industry an awful name, and we’re here to protect you from making an uninformed decision.

Take care of yourselves, spread the word, and try not to get ripped off

If you’re interested in seeing the ethical side of this business, take a look at our Best Fat Burner buyer’s guide, where we get you exactly what you want, while discussing tons of ingredients (the good, the bad, and even the potentially dangerous) with brutal truth.

Until then, feel free to sign up for price drop alerts on Fat Burners below – and we’ll notify you when this (or anything else) goes on sale: