Ghost claims 2020 is going to be their biggest year yet, and with all they have planned, we believe it! Although they’ve been pretty quiet for the first couple months, this is the calm before the storm, because March is about to be filled with epic new products and flavors. First up, Ghost announced that they’re going to give their vegan legends some love by releasing a new flavor of their popular Ghost Vegan Protein Powder, which may be the best flavor yet! 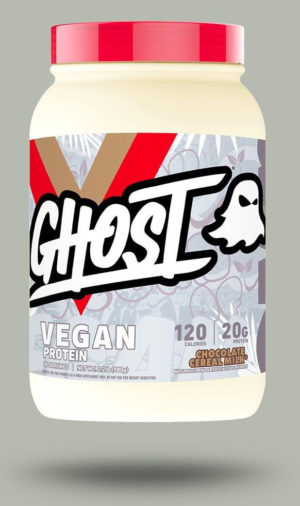 First, we saw Ghost tease the new vegan protein powder on Dan Lourenco’s Instagram story, and that got people fired up. Before we knew it, Chocolate Cereal Milk Vegan Protein was being run on the manufacturing line, and Ghost announced it will be released on March 7th, 2020. What better way to celebrate National Cereal Day than with a new Ghost Vegan Protein flavor?

“This is not like any other vegan protein on the market, from a packaging, formula, and flavor standpoint.”

In the rest of this post, we’re going to dive into what makes Ghost Vegan Protein one of the best vegan proteins on the market. But before we get to that, make sure to subscribe to Ghost news and deal alerts because trust us, Ghost is not lying when they say 2020 is going to be the biggest year yet!

Vegan Protein That Tastes So Good, You Don’t Need A Shaker!

The new Chocolate Cereal Milk Vegan Protein is so good Ryan Hughes took a scoop right to the dome. Watch the video for more behind the scenes footage of how Ghost turns a vision into reality! 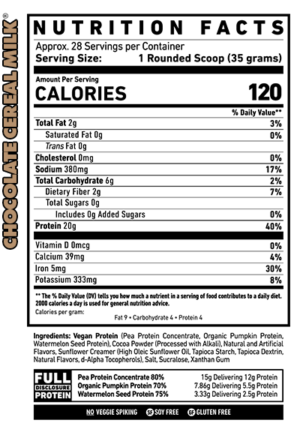 Ghost does Vegan Protein the best way anyone can, with a blend of three high-quality plant protein sources to create a complete protein. They also go above and beyond to give you the exact amount used of each by using a fully disclosed label.

Chocolate Cereal Milk Vegan Protein is going to be another very clean protein powder. It provides 20g of protein and only 130 calories. It’s a very macro-friendly protein powder, that’s convenient, tastes great, and an easy way to make sure you hit your daily protein targets!

As we mentioned Ghost makes sure you’re getting a complete protein by using three different sources which include:

All of these sources combine to give you 20g of protein per serving, which is awesome for a vegan protein powder. 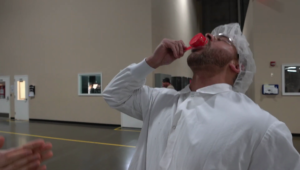 As is tradition, Ryan takes a scoop of the latest GHOST product to the dome! But it’s not so easy with a huge scoop of vegan protein powder…

Vegan proteins are typically quite difficult to flavor, but somehow Ghost is able to make their Vegan Protein Powder taste nearly as good as a dairy-based protein.

They accomplish this by adding in some extra ingredients that don’t mess with the macros, but improve the consistency, mixability, and taste exponentially. These ingredients include: natural and artificial flavors, sunflower creamer, salt, sucralose, and xanthan gum. Since this is a chocolate flavored protein powder, of course there is a fair bit of cocoa powder added to deliver a rich taste!

Another epic flavor from Ghost!

Ghost has one of the best tasting vegan protein powders on the market. Our favorite flavor used to be Banana Pancake Batter, but the new Chocolate Cereal Milk took the top spot! If chocolate is not your thing, but you still want to get your hands on a high-quality vegan protein powder then check out the other flavors below:

What about Ghost Whey?

Even the Ghost Whey Protein Powder doesn’t have Chocolate Cereal Milk, but don’t you worry, the whey protein is also getting a new cereal milk addition with Marshmallow Cereal Milk! Ghost has not announced when that’s releasing yet, but they finalized the flavor, and we expect it to be out soon!

We even heard that Ghost is planning on collaborating with Christian Guzman’s mom, Mama Guzman, to release a limited edition Ghost Whey flavor. We know she is an amazing cook, so whatever flavor that ends up being, it’s going to be amazing. 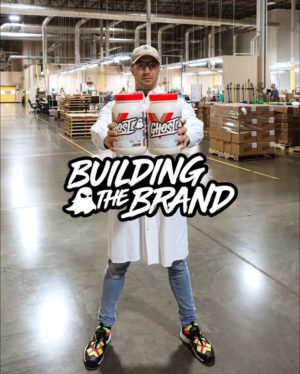 Another episode of Building the Brand and another epic product!

Ghost has one of the best vegan proteins on the market and you can see why. When Ghost first started, they only launched Ghost Whey, which won PricePlow’s top protein powder for 2019! Then Dan and Ryan decided it was time to enter the vegan protein powder market, and needless to say, they absolutely crushed it! But that’s just what we expect from the legends over at Ghost.

First Ghost Vegan Protein came in Peanut Butter Cereal Milk, then Pancake Batter joined the line up, and finally, at the end of 2019, they launched our favorite flavor, Banana Pancake Batter. Each new flavor seems to surpass the last one, and Chocolate Cereal Milk is no exception. We would love to see this flavor come in Ghost Whey as well, but only time will tell!

Ghost has a lot in store for this year like always, they had some major accomplishments in 2019 that are going to be hard to beat. Which included authentic flavor collaborations with some of the biggest names outside of the fitness industry, such as Sonic, Chips Ahoy!, and Sour Patch Kids! But if anyone can top those amazing feats and do even bigger things, it’s Ghost.

We love covering a brand that’s never satisfied, and when Ghost says they’re going to do something, you know they always deliver. There’s going to be so much happening in the next few months, make sure you stay up to date by subscribing!