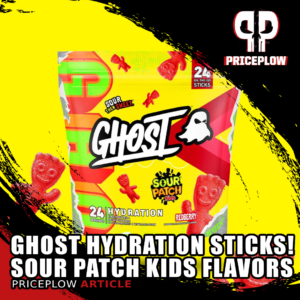 On March 9, 2022, Ghost launched Ghost Hydration, the next major piece of their legendary sports nutrition puzzle. This well-balanced electrolyte and cellular hydration supplement had been teased a year before, and was well worth the wait.

Once again, it’s time for consumers to pick a team — Red or Blue — because Ghost Hydration Sour Patch Kids Redberry and Blue Raspberry are out!

Compared to the original Hydration tubs released in March, these two incredible flavors* are different in a couple of major ways:

*Yes, we tried them early when we stole a few we found at Ghost HQ in our recent trip for the Ghost x TMNT launch and Podcast #066 with Dan Lourenco and Ryan Hughes. Sorrynotsorry!

Let’s check on PricePlow’s coupon-powered prices and then briefly recap the ingredients and backstory on Sour Patch x GHOST:

In our main article titled “Ghost HYDRATION: Electrolytes Done Right – With Potassium!“, we focused on Ghost formulating this one properly – with a phenomenal 2.5:1 potassium:sodium ratio. Too many hydration supplements ignore potassium, which is often the biggest shortfall electrolyte in diets. 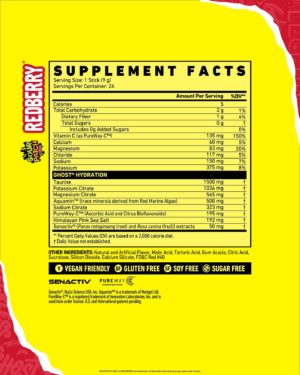 Quite frankly, this much potassium is tougher to flavor. But Ghost had nailed it… with stevia. These sucralose-sweetened Sour Patch variations taste even sweeter.

In each 9 gram stick pack of Ghost Hydration, you’ll get the following blend:

Again, you can read the full analysis in our main Ghost Hydration article, where we go very hard on the potassium ratio.

Stick packs sound good, but looking for the other options in stevia-sweetened tubs? See below:

With regards to the Hydration launch, Ghost has been teasing it for over a year, so there’s plenty of video footage in our main Hydration article linked above. 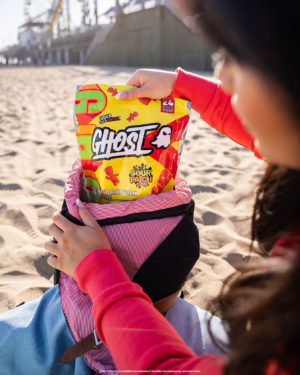 Ghost Hydration set to take on the world

With Ghost Hydration, the flavor hits perfectly – the electrolyte salts help add that melted gummy texture, so these flavor systems are perfect for the job. All the better that they’ll get tons of attention on grocery shelves, where the competition is… lacking.

So what’ll it be for you, team red or team blue?