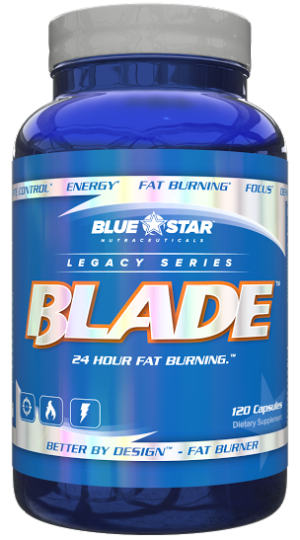 With the Arnold just days away, the flood of new products entering the market is astounding. The sheer number of entries into the fat burner, pre workout, and protein categories is enough to make anyone’s head spin.

However, anytime that Blue Star Nutraceuticals releases a product, our ears always perk up! Blue Star isn’t releasing a new product yet, but they have reformulated their ultra-effective fat burner Blade.

Why reformulate an already good product?

Well, since the recent Picamilon controversy, Blue Star and several other companies have been reworking the finer aspects of their respective products to remove the nootropic in place of other “safer” ingredients.

The new formula is a doozy, with lots of yohimbine to pair with its 225mg caffeine per two capsule serivng… and you’ll definitely be wanting to grab a bottle once you see what’s inside.

The label is just ahead, but first, make sure to sign up for PricePlow alerts and check the best deal:

Note: As we write this, the old version of Blade is out of stock. If you see prices in the widget above, it will be the new version discussed below!

CJ tore through this bottle like a champ, and loved it to death. We focused on the high-dose yohimbe here, since that’s what most people need to be aware of, but you can read about the rest of the ingredients below!

Blade’s list of ingredients read like an open book. All of the actives that concern energy, focus, and fat burning are transparently dosed for your benefit, a rarity among most fat burners. The only aspect not fully disclosed is Blue Star’s patented XD Delivery Technology, which ensures your body is primed for maximum absorption.

The doses below are for two capsules:

As usual for fat burners, it’s going to come down to the caffeine and stims.

To assess tolerance, Blue Star recommends beginning with one capsule (~112.5mg caffeine worth) and increasing to 2 capsules pending no adverse side effects. As a dietary supplement, take 2 capsules of Blade upon rising and 2 capsules mid-afternoon with at least 8 oz of water. Do not take within 5 hours of sleep.

Do not exceed 4 capsules in a 24 hour period – four capsules gets you 450mg caffeine in a day, so you shouldn’t mix any other stimulants in with the new Blade Formula.

Blue Star is a Canada-based company, and they do not mess around when it comes to the claims they make on their literature.

Blade’s reformulation hits all the right notes when it comes to building an effective fat burning formula. It’s got the right amount of energy from caffeine coupled with a host of cohorts that suppress appetite while ramping up your metabolic rate and fat burning capacity.

The question is… can you handle the yohimbine dose? If so, you’re going to feel the burn with this one. But if not, you’ll need to look for yohimbe-free options. From Blue Star’s standpoint… might as well go big if you’re going to go at all!

Next up for Blue Star is a reformulation of their stellar pre workout P.P.K. which should be finalized in the coming weeks. Make sure to stay tuned to PricePlow for further updates as we’ll be the first to have it once it drops!