Instead of reaching for another energy drink, a cup of coffee, or a high-stimulant pre-workout, have you considered trying a sleep-aid, such as AP Sports Regimen Hyber-Nite? If you truly want to perform at your best, then prioritizing rest and recovery is paramount. Unfortunately, with our fast-paced, busy lifestyles, sleep deprivation is a major problem. Not only can a lack of sleep negatively affect physical performance, but it can also leave a lasting impact on your health. 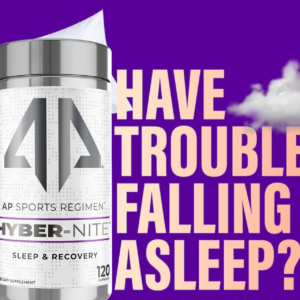 A systematic review published in the journal Nature and Science of Sleep found that habitual short sleep duration is associated with several health issues, such as:

The study also notes that the following factors are likely to be a cause of insufficient sleep:

Both the National Sleep Foundation and the American Academy of Sleep Medicine recommend that adults (18 to 60) sleep anywhere from 7 to 9 hours per night.[1] To some people that may be no problem, but to others, it might seem like a near-impossible task. Fortunately, there are several things you can do to improve your sleep quality and duration, such as supplementing with a sleep-aid.

Supplements for the modern athlete.

AP Sports Regimen understands how important sleep is for recovery, performance, and overall health, which is why they released a sleep aid as part of their new product line. Hyber-Nite was formulated with key vitamins and minerals to promote the production of serotonin and melatonin in the brain, such as vitamin B6, zinc, and magnesium. Serotonin and melatonin are two key hormones that assist in inducing sleep.

In Hyber-Nite, AP Sports Regimen included four additional ingredients that may help you fall asleep faster and stay asleep longer— GABA, L-theanine, 5-HTP, and melatonin. Overall, Hyber-Nite is a simple, yet effective, sleep aid and it may help you boost your health and performance.

Keep reading to learn more about Hyber-Nite’s formula! Don’t forget to sign up for AP Sports Regimen news and deal alerts to stay up to date with one of the newest sports nutrition brands!

For optimal results, AP Sports Regimen recommends taking four capsules of Hyber-Nite approximately 30 minutes before going to sleep. As always, talk to a qualified healthcare professional before taking Hyber-Nite to ensure that you have no contraindications.

Here’s what one serving (four capsules) of Hyber-Nite contains: 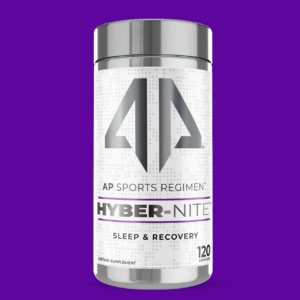 Rest, recover, and rebuild with Hyber-Nite.

Getting enough high quality sleep at night can be incredibly beneficial, yet challenging for some. There are several steps you can take to improve your sleep, such as:

Beyond modifying your lifestyle to improve sleep quality, adding a sleep aid to your supplement stack may be the next best option.

There are several well-formulated sleep aids on the market, and they’re starting to become a lot more popular in sports nutrition as the number of people who suffer from insomnia continues to rise. Not to mention, a sufficient amount of quality sleep is incredibly important for maximizing performance, regardless of your physical activity level or career.

Based on the supplement facts panel, Hyber-Nite is definitely a sleep aid that we recommend trying. With just a few simple ingredients, AP Sports Regimen created an impressive sleep aid. For more information on AP Sports Regimen and their new product line, just subscribe below!