If you’ve been keeping up with industry news on PricePlow lately, there’s no doubt that you’ve come across SteelFit. The team behind this brand are industry veterans – they’ve been around for nearly 30 years, originally making a name for themselves with ProTanⓇ, a company popular within the bodybuilding industry for tanning topicals. Taking their expertise over to the supplement industry, however, has allowed these individuals to inject a new sense of diversification within the business, and based on what we’ve been seeing recently, we’re all for it!

Topical Pain Relief with Hemp… in a Roll-On Stick!

SteelFit Steel ReleafⓇ is a pain-relieving roll-on liquid that attacks acute pain and inflamed joints, calling on numerous ingredients in order to combat pain. If that didn’t get your attention already, get this – SteelFit is using perhaps the fastest-growing supplement ingredient out there these days, “Hemp”. That’s right, Steel ReleafⓇ contains 300mg of THC-free hemp-derived isolate, which helps take this formula from powerful to transcendent.

From the hemp isolate to lidocaine, there are so many clinically-tested pain-relieving agents here, and we’re incredibly excited to give you the rundown on the ingredients in Steel ReleafⓇ, and tell you why this formula is so powerful! Before we take that deep dive, however, make sure you’re subscribed to PricePlow, where you can find awesome supplement deals, news, and reviews! 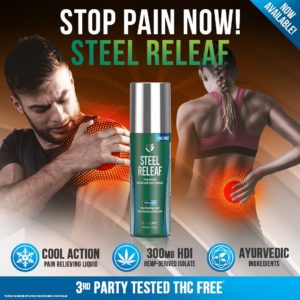 Lookiing for a way to fight pain as soon as it hits? SteelFit Steel Releaf may be what you’re looking for!

SteelFit has been on fire lately, hitting us with a ton of new releases, each of which as unique and effective as the last! Initially impressed with products like Steel Whey or Shredded Steel, we’ve continued to rave about more recent products, especially Multi-V, SteelFit’s great-tasting multivitamin powder! Even though the brand has continued to grow its product portfolio, venturing into new markets, their newest product has simply blown us away!

Right from the start, Steel ReleafⓇ announces one of its most important qualities through its name – this topical primarily uses all-natural ingredients, many of which have been used for centuries. Combine these anecdotally tried-and-true ingredients with the growing reputation of hemp-derived compounds, and through the use of a little modern science, you have a potent pain-relieving forPmula.

This product is absolutely loaded, too – something we’ve become accustomed to with SteelFit. They spare no expense at packing as many quality ingredients into a label, as they always strive to put out the best possible formulas of their products that they can! Let’s jump right into this label – there’s so much to cover, we can’t waste any more time!

Look at the insane amount of ingredients SteelFit uses here! And look all the way down, the “inactive” ones are just as important as the “actives”!

Although Steel ReleafⓇ only lists 2 active ingredients, there’s so much more working behind-the-scenes here. We’ll kick things off with the attention-grabbing hemp isolate, but don’t worry – we’ll plunge into the research on everything else, too!

Understanding this label is key

Wow – Just because Steel ReleafⓇ lists quite a few “inactive” ingredients doesn’t mean they’re insignificant! Practically each of them offers some sort of anti-inflammatory or pain-reducing effect, which magnifies the overall capabilities of this entire formula. They’re no afterthought – they share a prominent supporting role!

Steel ReleafⓇ is for acute pain and inflammation! 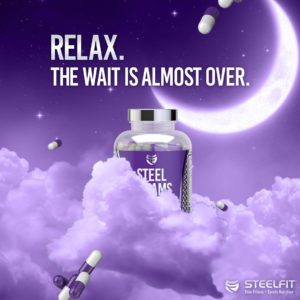 A recovery-boosting tandem of Steel Dreams and Steel Releaf?! Sign us up!

Although ReleafⓇ brings a bunch of effective pain-relieving agents to the table, it’s important that we underline this product’s true purpose. It’s developed for acute pain and soreness only, the kinds of discomforts you may come across in any given day. Maybe you sat too long at a desk and your lower back is sore, or your chest is sore after a tough bench press workout. Rolling some Steel ReleafⓇ on the given area can really do you some good, in these cases!

That being said, this product should really only be used in those scenarios. If you’ve done some major damage, such as tearing a muscle or dislocating a joint, rolling on this therapeutic formula won’t fix the issue. For these more serious concerns, it’s in your best interest to see a professional to get proper help!

Recovery is the name of the game, here – either post-workout or post-operation, Steel ReleafⓇ can provide some additional aid. It won’t fix the issue, but it will definitely make it more tolerable!

Every time SteelFit puts out a new supplement, we’re left saying “wow”. They did it once again here, with another unique bombastic kitchen sink formula from the heavens. 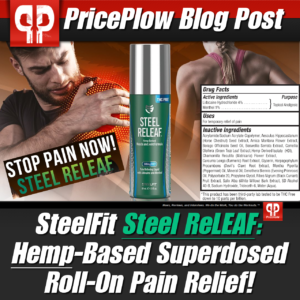 Note that the label above is truncated, but we need to call attention to those “inactive” ingredients way at the bottom in Steel Releaf!!

The team behind the fantastic line of products at SteelFit have been around for quite a while, and they’ve built up a level of expertise that has allowed them to create some truly innovative and unique products. Over time, they’ve adopted one core trait at the center of each of their products – potency. Each product, from Steel Dreams to Multi-V, is formulated with only the best ingredients available, with each label practically overflowing of clinically-tested ingredients!

With roots in the realm of topicals, it’s only natural for SteelFit to venture back into that arena. Sure enough, Steel ReleafⓇ combines that experience with their new methodology. This loaded pain-relieving roll-on is made to fend off acute pain and inflammation, allowing you to keep your mobility and performance on point!

We’ve all been there – after a brutal shoulder workout, your arm is feeling a bit tight and uncomfortable. You don’t think there’s any serious damage, but nonetheless, it’s sore and it hurts. These types of situations are just Steel ReleafⓇ was built for – throw some on the inflamed area, and it’ll soon feel like brand new! Everything in this product makes up for a powerful, natural pain reliever, and thus makes Steel ReleafⓇ something you may want to have your hands on!