When it comes to stimulant-free fat burners, there’s been no combination more potent than two of NNB Nutrition’s Burn Series ingredients: 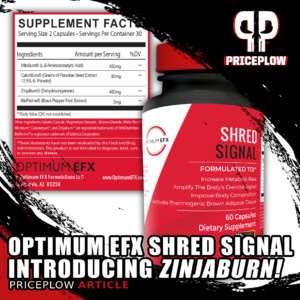 Optimum EFX Shred Signal is a stimulant-free thermogenic fat burner that brings to us the first use of ZinjaBurn (dehydrozingerone) from NNB Nutrition!

With their latest formulation, a company named Optimum EFX decided to take this potent combination a step further:

Optimum EFX Shred Signal not only has the powerful MitoBurn / CaloriBurn combination, they’re also the first supplement company to include ZinjaBurn, NNB Nutrition’s dehydrozingerone ingredient. This compound is a chemical cousin to curcumin, and is found in ginger. Below, we dig into the formula, focusing on the trio of Burn Series ingredients:

Tested to be free of banned substances

Worth noting for drug-tested athletes: Shred Signal is certified as Informed-Sport, meaning it’s tested to ensure that it’s free of WADA-banned substances!

Shred Signal’s label states to take two capsules twice daily, but at 30 servings per bottle, that would leave you with a 15 day supply.

For beginners, we’d recommend two capsules daily to assess the spice. The full four capsule daily dose can be taken for advanced users.

Interestingly, just one capsule (half of a serving) of Shred Signal has a clinically-supported dose of grains of paradise extract, which could be used if in “poverty mode”. We suggest at least two capsules to get greater doses of everything else, however.

Conclusion: ZinjaBurn is here and it’s fire with Shred Signal 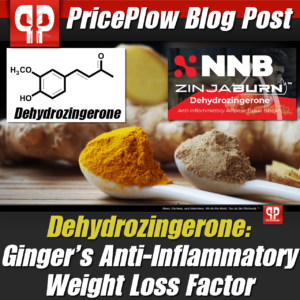 Now that we’ve covered the incredible effects of dehydrozingerone, it’s time to talk about where to get it – in Shred Signal!

Shred Signal is one of the most aptly-named fat burners we’ve seen in a while, and this is in a category with all kinds of wild product names. It truly contains a metabolic signal inside, in the form of L-BAIBA MitoBurn.

And while we love the MitoBurn + CaloriBurn combination, which synergistically amplifies the WAT to BAT conversion and then drives the BAT harder, it’s really the introduction of ZinjaBurn that we’re excited about.

There’s a bit of research on curcumin’s ability to promote weight loss, but it’s never been a focus for that ingredient, and likely never will. Why? Because dehydrozingerone — aka ZinjaBurn — can do it better, and with more bioavailability!

So if you’re looking for a potent thermogenic that allows you to keep your coffee, pre-workout, or energy drink, and you want something new, we believe Shred Signal, with its trio of Burn ingredients, is one to try. And if our ZinjaBurn theory’s correct, it just may make dieting feel better too.