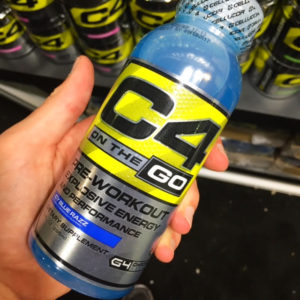 Cellucor’s popular pre workout is getting the RTD treatment with C4 On the Go!

Cellucor’s all new portable pre workout drink, C4 On The Go has been in the works for months now. Finally, the long wait is over and we have our hands on the label! We originally expected this ready-to-drink version to have pretty much the same label – but we were mistaken. We expected this to quite similar to the other iterations of new C4 pre workout in their 4th Generation (G4) lineup, but we were wrong.

Before we get to the breakdown of the paired down ingredients in this portable C4, make sure to sign up for price drop alerts below:

C4 On The Go Ingredients 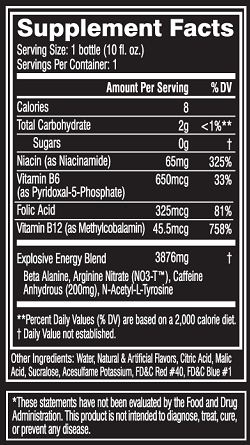 C4 On the Go pack all the same ingredients you’ve come to love in the original version, now much easier to take with you to the gym!

The new C4 RTD has a much slimmer “Explosive Energy Blend” than it’s powdered C4 brethren. Gone are ingredients like TeaCor, which is a form of theacrine, Creatine Nitrate, and Velvet Bean.

This is a shame because we have really come to like the combination of theacrine and caffeine. If you haven’t heard of theacrine yet, it’s a plant extract that functions similarly to caffeine but without creating a tolerance to it. It also synergizes with caffeine for improved energy and mood (click the link above for more information).

Other changes include, rolling beta alanine into the “Explosive Energy Blend” along with Arginine Nitrate (which replaces Creatine Nitrate in the G4 C4). Whereas we new the exact dose of beta alanine in the new C4, the RTD version doesn’t disclose this amount. N-Acetyl L-Tyrosine still hangs around to help improve focus, but it’s the very last ingredient in the prop blend, which makes us think there’s less of it in this RTD edition than in the G4 version.

For comparison, the new formula of the “base” C4 powder is already out, so you can see he exact differences there.

So far, from the pictures we’ve seen of C4 On the Go, it’ll come in at least two flavors: Blue Razz and Fruit Punch.

Hopefully one or more flavors will hit the market as the product rolls out to the masses.

C4 On the Go is a perfect option for those who need a pre workout fix on their way to the gym, but don’t want to deal with the hassle of powders and shaker bottles, let along trying to find a clean water fountain. The profile is more streamlined compared to the numerous powder option of C4, which isn’t necessarily a good thing in our minds.

It’s not clear yet when the RTD formulation drops but the general expectation is soon, when the product line becomes available to other retailers. We’re weren’t expecting any big label changes with this one, but it shows that you may not always know what curveballs life will throw you.