Based in Austin, TX, Anabolic Warfare has been hitting the supplement industry hard with some incredibly aggressive muscle-building supplements. 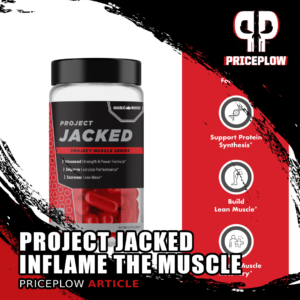 One of the unique selling points behind this product line is the inclusion of ecdysteroid-containing plant extracts, bringing an exciting new body of research showing enormous anabolic potential. The first product in the Project Muscle line, Project Hulk, sold out in just a few days, partly because it contains turkesterone, perhaps the most sensational phytoecdysteroid on the market.

But if you’re not looking outside of turkesterone, or want to go above and beyond in your stack, what else does Project Muscle have to offer?

Today we’re going to take a close look at Project Jacked, one of the unique muscle builders in Project Muscle. This one’s incredibly exciting because it contains arachidonic acid, a pro-inflammatory muscle-building ingredient we haven’t seen for far too long. Additionally, we have a different source of ecdysteroids in Rhaponticum carthamoides.

We’ve never seen a muscle builder like this, so below, we take the deep dive. Before getting into the science, take a moment to sign up for PricePlow’s Anabolic Warfare news alerts and check prices:

In a single three capsule serving of Project Jacked from Anabolic Warfare, you get the following:

As discussed in the arachidonic acid section above, you’re going to want to put this one close to your workout and away from anti-inflammatory ingredients such as fish oil, curcumin, and NSAIDs. Our initial thinking is to take it post-workout, but many argue for ArA to be taken pre-workout – the point is to take advantage of the acute inflammation generated!

Conclusion: ArA is back in Project Jacked! 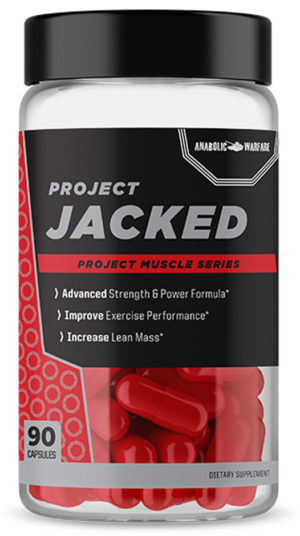 ArA is back with Project Jacked!

Anabolic Warfare’s Project Jacked is on the cutting edge of testosterone-boosting research. We particularly like the emphasis here on compounds that inhibit SHBG and boost free testosterone while providing some aromatase inhibition through the inclusion of DHEA, all while promoting muscle-building inflammation around your workout.

Because of all of these mechanisms coming together, including the ATP boosters, this could possibly be the most unique muscle building supplement on the market.

Meanwhile, phytoecdysteroids are a huge frontier in supplement research today – we predict that in 2022 and beyond, you’re going to see more and more brands including extracts from phytoecdysteroid-rich plants like Rhaponticum carthamoides. Anabolic Warfare did that here and then some.

So far, Project Muscle is coming through in a big way. We intend to continue covering them, since there are several types of unique product in this line that you can mix and match for a custom approach and optimal results:

We consider Project Jacked to be one of the more advanced formulas inside, and that’s why we covered it first in our Project Muscle series.