Posted on July 29, 2022 by Mike Roberto and Nick Andrews | No Comments

In the view of legendary bodybuilder Rich Piana, only 5% of people have the vision, drive, and skill required to reach their personal goals and become the best possible version of themselves. 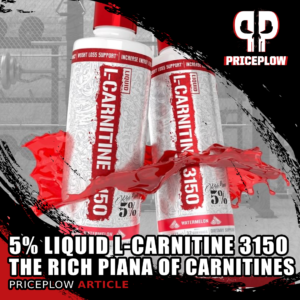 With a quadfecta of L-Carnitine, Acetyl L-Carnitine, LCLT, and GPLC — alongside GBB and Thiamine — 5% Nutrition’s Liquid L-Carnitine is the “Rich Piana of carnitine supplements”

Piana founded his supplement company, 5% Nutrition, with a laser focus on one goal: to produce supplements of exceptional quality and efficacy, good enough to make a meaningful difference in the lives of this elite 5%. Piana hoped to make a meaningful difference in the world by giving these high achievers the nutritional support they need to feel and function at their best, thus helping them achieve their goals and become the best possible version of themselves.

Today we’re going to discuss one compound that is particularly good at helping people perform: carnitine. And a supplement that gives us an incredible 3.15 gram blend of it – 5% Nutrition Liquid L-Carnitine 3150. This is what we consider “the Rich Piana of carnitine supplements”.

Below, we dig into this quadfecta blend of L-Carnitine, L-Carnitine Tartrate (LCLT), Acetyl-L-Carnitine (ALCAR), and Glycine Propionyl-L-Carnitine (GPLC) boosted by GBB and thiamin, diving into each carnitine’s added benefits — but first, check out prices, flavors, and availability with PricePlow and sign up for our 5% Nutrition news alerts:

Carnitine is essential for optimal human health, and has been identified by researchers as a “quasi-vitamin” because of its absolute necessity for optimal metabolic function.[1]

It affects your body’s production of adenosine triphosphate (ATP) which, as we will see, affects almost every aspect of human health because of how fundamental ATP is for cellular function.

In a single 1 tablespoon (15 mL) serving of Liquid L-Carnitine 3150 from 5% Nutrition, you get the following:

Because carnitine is consumed in the metabolic adaptations to exercise, athletes generally stand to benefit more from carnitine supplementation than non-athletes. Research shows that athletes who supplement with carnitine can enjoy better oxygen uptake and power output during exercise, and reduced soreness and faster recovery following exercise.[3] 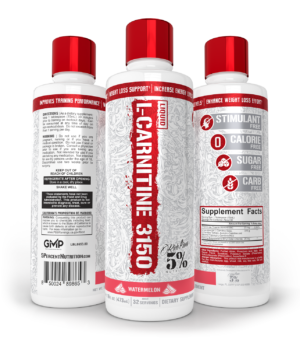 Because the primary source of carnitine is red meat (hence the name), vegans and vegetarians also may have a special interest in carnitine supplementation, as do the elderly (because of age-related metabolic decline).[3,54-59]

This is a liquid supplement – so it has to be flavored, of course:

5% Nutrition really pulled out the stops with this one – the formula design of their 3150 Liquid L-Carnitine shows a deep understanding of carnitine production. We love seeing the combination of supplemental carnitine with GBB to help push the regent-product equilibrium in the right direction, plus all the different forms of carnitine that all have a unique benefit.

In terms of stacking, dieters will appreciate the Shred Time and Stage Ready images shown on this page, while bulkers (and nearly everyone else) should consider a creatine supplement like 5% Nutrition’s Core Creatine or the fabulous Crea-TEN supplement. Plenty of other great supplements can be stacked in depending on your goals – read about them all on our 5% Nutrition News & Articles page!