Patrick Mabe: Crushin’ it at The Tactical Games with Core and Merica Energy | PPP #073 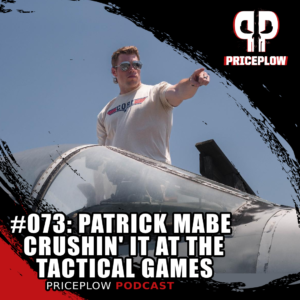 Patrick Mabe (@mr.patrick.mabe) of Core Nutritionals, Merica Labz, and Merica Energy joins the PricePlow Podcast to discuss his competition in the Tactical Games, fatherhood, and living the Crush It Lifestyle at Core Nutritionals in North Carolina!

This was a great follow-up to The Boss Status Episode 8, where Patrick and Doug Miller interviewed Mike and Ben – now the tables are turned and we get to hear Patrick’s backstory and new path.

Will Patrick be able to bridge the gap between sports supplements, tactical competitions, and the shooting world? With these brands, we’re hopeful. Get ready to learn some great new stuff in this episode:

We will definitely have updates from Patrick over the next year or two after more competition – we didn’t even get into his books! Follow him at @Mr.Patrick.Mabe to see what he’s been reading!