You can click here to see it at the best-priced store, or read more about it below.

The front of the label has now been unleashed, and it looks both powerful and innovative: 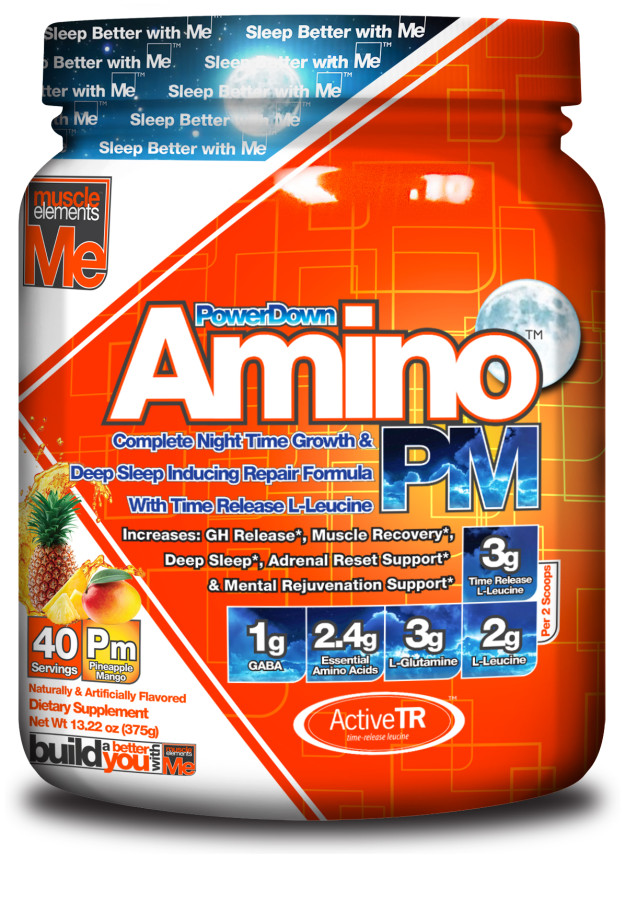 The front label of PowerDown Amino PM gives us a peak at some of the ingredients.. of note is the new ActiveTR time-released leucine — PERFECT for a nighttime supplement!!!

What is Amino PM?

The entire ingredient label is below. Here are the key highlights from the front of the bottle:

This is exactly what many of us have been looking for – especially those who get ridiculously sore or wake up overly hungry after a hard day’s training.

Before we get started, sign up for alerts, then keep reading:

Muscle Elements: Build a Better You with Me

There are six different sections to the ingredients in PowerDown Amino PM, and they’re all 100% open formula, so we can get down to the details.

In general, we’re looking for Amino PM to do the following things:

As we dig through the ingredients, you’ll find that every one of these bullet points is hit multiple times, yielding a masterfully-crafted product that’s unlike anything to come before it. This is what makes it a clear front-runner for the #1 spot in our Best Sleep Aid guide.

A quick note on the dosage

Each serving size listed is from two scoops, which would leave you with 20 servings in the tub. The driving force for how much you’ll want to use is most likely going to be the melatonin dose – there is 1.5mg in one scoop and 3mg in two scoops.

We’ll focus on melatonin later, but two comprehensive studies haven shown 2-3mg to be the general sweet spot[1,2] for most users, with a mean dose of 2.69mg stated in the second study.

This means that the “average ideal dose” of AminoPM will likely be around 1.5 scoops, which puts most users in the 30 servings per container range – perfect for one month!

Finally, on to the formula:

General conclusions on the formula

As you can see with our 75 citations, this product is not only revolutionary, it has a rock star cast as well. Muscle Elements did it first, but they also did it right, as they’re so apt to do.

Even if you think you sleep well, Amino PM is a must try supplement. Why? Because we thought we slept well too, until we beta tested a few samples and had no clue what hit us until we woke up totally fresh in the morning.

Amino PM truly is different than any other product in the entire nutrition / nutraceutical industry.

Nobody is mixing the amino acid and sleep category, and that’s why we’re so excited — 99.9% of products are the same thing over and over (another underdosed pre workout, anyone??), and since we’re always looking for the Next Big Thing(TM), we get excited when something new comes along.

This will just be that product.

Muscle Elements is doing a fantastic job innovating with new supplements since they launched last year.

While other companies are trying to unload more aminos by simply adding caffeine to them (as if we need more stims lately)… Muscle Elements turned a complete 180 and perfectly put them to the opposite use: before bed, when they’re needed most!

It’s one of those times when you think “why hasn’t anyone done this before?”

Many of you love your sleep aids / sleeping pills… but mixing them with a time-released amino acid formula? Brilliance in its sheer simplicity!

Sign up below if you want to get notified when there’s deals! You can also request price drop alerts on all Me Supplements:

First, a bit of honesty: I’ve never gone through an entire tub of nighttime sleep products all at once, and typically save them for nights where I’m a bit too revved up before bed.

I always consider myself a “good sleeper” – especially when my lifting and cardio game is on (which it has been), but after trying my first two samples of Amino PM, I’m starting to question that.

Because the beta samples of this product so far have me sleeping like a petrified rock. I don’t remember waking up at night ever, nor do I remember tossing and turning, which does happen even on my “good” nights without anything.

I’ve used about 5-10 samples of Ronnie Coleman’s Resurrect PM, CTD Sports’ Noxitropin, and MusclePharm’s Iron Dream, and this one was definitely the most “intense” yet had me waking up completely fine.

Within 15 minutes, Amino PM starts kicking in – it’s got to be that GABA dose. I tried reading both times, but was effectively useless, gave up, and fell asleep immediately.

The first night, I had some pretty intense dreams similar to what you’d get with a ZMA-like product, but I’m not sure if that means anything just yet. Something of that wavelength is going on… but perhaps it’s the GABA too.

It’s too early to tell if the ActiveTR (time released leucine) is really doing anything, but I’ll note that the two times I used this, I didn’t wake up ridiculously hungry like I often do.

I cannot comment on the taste or mixability because the beta samples I had were not using the finalized flavors. Muscle Elements says that the final versions are incredible, so we’ll let you know when it’s done. It’s nice to have the last thing you drink before bed taste great.

So, as a pre-review, so far, I’m very impressed. Stuff works as advertised, but a whole month of hard training with it will be needed for a final review.

Those of you who like sleep products are going to need to jump on this one immediately, though! 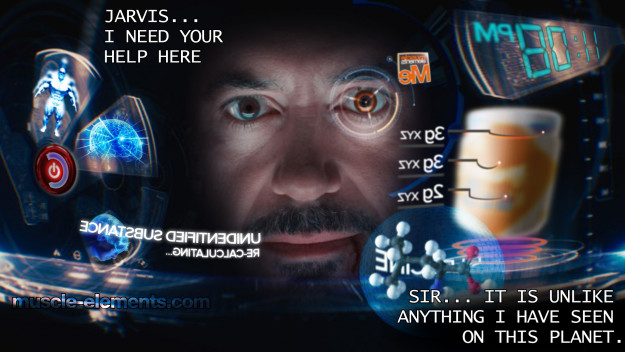 Sure to please your inner Ironman, Muscle Elements’ Amino PM will be unlike anything you’ve ever tried before.

Muscle Elements takes a whole new approach to building effective supplements. Whereas most companies focus on combining ingredients to create a product, ME takes it one step farther by combining categories.

True to their name, they mix the best elements of one kind of product with the best element of another, creating a new kind of supplement that’s not only better than the previous two – it’s totally different as well.

Haven’t heard of AmiNO Flow? Then meet your next gym-time BCAA Supplement 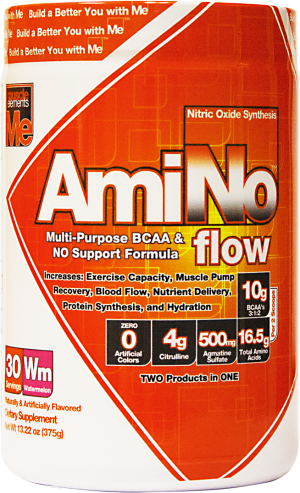 AmiNO Flow was the first Muscle Elements supplement to completely break the mold, and is now our favorite BCAA supplement for flat out LIFTING. Will AminoPM be able to match it at night?

They did it first with AmiNO Flow, a BCAA supplement that is considered an “Amino-Oxide”, combining amino acid supplements with nitric oxide supplements.

As simple as it may sound, it’s never been done well until now, and holy hell AmiNO Flow it give you some insanely sustained pumps during your workout. It has so many nitric oxide boosters that it may as well be a stimulant-free pre workout supplement — and you can in fact use it for that.

Even if you have a cheap pre workout with weak NO boosters, you’ll find yourself getting stronger and stronger throughout your lifts when sipping AmiNO Flow throughout.

Next in line: Amino PM

We’ll explain more as the information comes available to us, but keep your eye on Muscle Elements over the next year or two – they’re giving us a completely new way of looking at supplementation.

Meanwhile, because of AmiNO Flow’s insane effectiveness in the gym, we’re happy to say that it’s going to be listed as the #1 amino acid product for weightlifters on our upcoming Best BCAA Supplement buyer’s guide.

We believe Amino PM is a category-crusher too.

Who is Muscle Elements?

Muscle Elements: Build a Better You with Me

You can read more about this popular “new” brand on our Muscle Elements page, which has a title that steals their tagline, “Building a Better YOU with Me”.

We put the word “new” in quotes because the business is new, but the leaders are not – they’ve been working in the supplement space for well over a decade!

Our trust in them is about as high as it can get. In a time when protein spiking was done by too many companies to count, Muscle Elements allowed Stack3d to buy any random bag of their open-formula TRUTH Protein Powder, and it came in overfilled, passing the test with 25g of non-adulterated protein – no spiking here!

So when a trustworthy company steps up even higher and comes out with a groundbreaking new product, you can bet your ass we’re interested.

Right now, Muscle Elements is guessing that this will be released around August or September of 2015. These dates are tough to keep, so no promises there.

Note that Amino PM is the final product name, and we’ll be the first to let you know when it comes out!