Bad news for our athletic stimulant users down under!

On May 17, 2017, the Australian Government’s Department of Health posted a new advisory that recommends the ban of both DMHA and DMBA (AMP Citrate) effective October 1, 2017:[1] 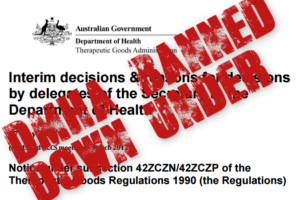 This is not yet set in stone, but historically, once the ban-ball gets rolling, they’re rarely ever stopped without a serious legal battle.

This advisory details the updated scheduling status of banned stimulants. In the list of schedule 10 banned stimulants in Australia, AMP Citrate and DMHA were not yet scheduled. That all changes when they’ll get added to the Schedule 10 list alongside.

There is not a single reason provided — health or otherwise — why Australia is banning DMHA.

Either way, Australian fans most likely have until the end of September to stock up on their favorite legal stimulant, unless someone were to mount a major legal effort such as how Hi-Tech is battling the FDA in the states.

Thrown under the bus

Given that it’s been sold for two years and we’ve heard of zero adverse events, we’re inclined to say it’s a safe stimulant when used at the doses provided in these products.

But that doesn’t matter to governments, who permit countless suicide-pills in the form of mind-numbing anti-depressants and addictive opiates, yet can’t provide a single reason why you can’t have a mild new stimulant.