If there is one thing we certainly love over here at PricePlow, it’s seeing new and delicious flavors for protein powder. Nothing is worse than cracking open the same bland tub of whey day after day until you can’t even stand the flavor. Today, we cover one that’s completely different. 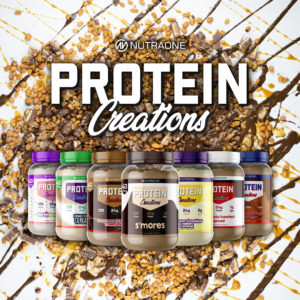 NutraOne’s Protein Creations are like divine intervention from the Protein Gods. Get ready to feast!

The solution is here for those with a bit of a sweet tooth that want a killer tasting protein option, with a macronutrient profile that’s still clean. We’re talking about NutraOne’s Protein Creations.

If you’re ready for low-carb protein that still has crispy, crunchy “inclusions” inside like sprinkles, graham cracker gems, or even marshmallow bits inside, then this is one you’re not going to want to miss! These flavors are on point!

Yet flavor isn’t all we care about. We care about our macros, open labels, and no amino spiking. Thankfully, those problems are no issue at all for NutraOne and their Protein Creations.

The labels give you exactly how much protein comes from each source, a recent trend we love in the fight for transparency. Protein Creations use a blend of fast and slow absorbing proteins to give you the best of both worlds. Not only is the protein source open, but they even have the full amino acid profile right there on the label for you, so you know exactly how much of each amino acid you are getting in a full serving. This also shows us that they do not amino spike their products to pad up their protein amount by adding cheap filler.

Based out of Austin, TX, NutraOne has been big in the retail space but never on PricePlow — until now!

And despite the amazing taste, each serving only has 120 or 130 calories, depending on the flavor, and only 2g of sugar or less. For such a tasty product, especially one using whey concentrate, these are some seriously clean macros. And here’s the kicker: real cookie pieces, caramel, sprinkles, and graham crackers in their products! Yup, that’s right, we have crispity crunchety “inclusions” yet and only 2g of sugar.

Let’s get to it, but first, check our deals and sign up for our NutraOne alerts so you don’t miss any deals or giveaways!

Normally we talk about the ingredients next, but since these are so damn delicious, let’s focus on the flavors:

With a decadent array of unique flavor options, anybody’s sweet tooth is sure to be satisfied with one of these options, completely guilt-free. Since more flavors are surely to come, here’s our up-to-date flavor listing, and then we’ll describe the ones that are out as we write this: 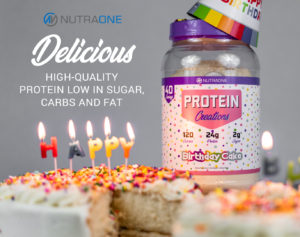 With real sprinkles added, Birthday Cake is one of the sweeter proteins you’ll ever have. This is the flavor for the big sweet tooth!

At the time of writing, we’ve got seven awesome options here, with S’Mores being the newest delicious addition:

Now let’s get into the macros and protein blend here:

The macros will vary, but you’re typically looking at the following:

The biggest adjustment is that the flavors with peanut flour added will have 3g fat and about 130 calories… but sometimes also 25g protein!

Chocolate Caramel Candy Bar also has 4g carbs and 2g sugars, so it’s definitely the “dirtiest” of the bunch, and that’s nothing compared to other proteins… many of which don’t even have inclusions!

This blend gives the “best of all worlds” between high quality whey protein, but some added micellar casein to add thickness and flavor without any noticeable grit. When we’re not chasing after single-carb isolates which are way thinner, we love blends like this. It’s a perfect mix, so long as you’re not lactose intolerant.

After the proteins come the extra ingredients, which vary by the flavor. As discussed above, NutraOne isn’t afraid to add inclusions like sprinkles, Graham Cookie Gems, caramel, a dash of extra sugar, or even molasses!

The gum blend is a trifecta of gum acacia, guar gum, and xanthan gum. 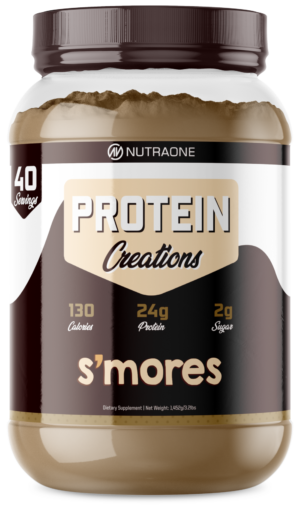 What NutraOne’s website’s image doesn’t show you are all the marshmallow bits inside this S’Mores flavor!!

Finally, this is an acesulfame potassium (Ace-K) free protein powder — sucralose is the only artificial sweetener added in, and it’s last on the list! That’s the glory when you’re adding caramel, molasses, sprinkles, or whatever else it may be depending on the flavor!

Protein Creations knock it out of the park

We have some very unique flavors going on here that live up to the hype — and then some! The labelling and packaging on these tubs is beautiful, with a very appealing aesthetic to it, especially given the clear tubs showing that you’re getting something very interesting inside.

While the initial prices seem higher for a protein, each tub is actually three pounds — not two — for a full 40 servings. So don’t be fooled by the look of the bottle, it’s not a 2lb tub. We hope to eventually bring the price down with a coupon or discount.

But no doubt, you’re paying a premium for these ridiculous flavors and transparent dosages for your aminos with low sugar, both things we absolutely love here.

Overall, Protein Creations are a serious contender in the protein market, and we’re excited to see what other delicious flavors they will pump out next. Add this to your list — the biggest question is what flavor to try! Right now we’re on the S’Mores and Cinnamon Cereal Squares train!