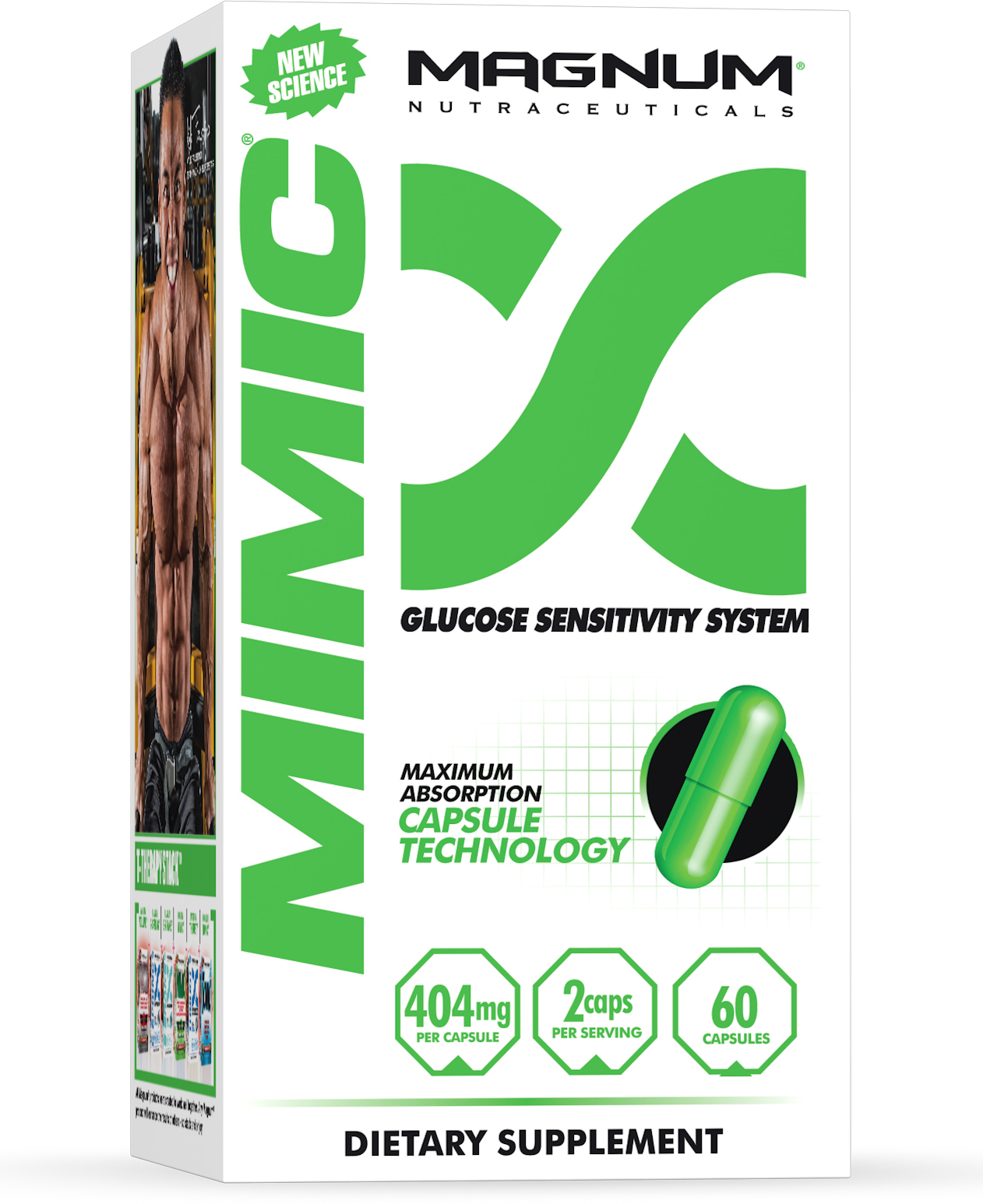 Whoa this is a strong one! Mimic is a high powered glucose disposal agent (GDA) developed by Magnum Nutraceuticals to help shuttle carbs to your muscles and not your waist.

We’ve been on a big GDA (glucose disposal agent) kick this year, so we had to see what our friends at Magnum Nutraceuticals had in their line.

Everyone loves carbs (admit it you low carbers!) Whether it’s a towering stack of warm chocolate chip pancakes or a heaping bowl of pasta topped with grandma’s red sauce, everyone has their own guilty pleasure when it comes to the controversial macronutrient.

Unfortunately, as you age, you aren’t blessed with the furnace of a metabolism that your younger self once enjoyed. Now, even going just a bit over your carb number can spill into bodyfat gains.

Magnum has a strong answer to the carb conundrum. Magnum Mimic is a powerful and unique glucose disposal agent that will help take your biggest carb meal and get more stored into your muscles, and less into those problem areas.

Products like this are also known as nutrient partitioners, and if you’re carb-sensitive, these underrated beasts are must-haves. The question is, how is this one different?

You can check out the label below, but make sure to check the best deal and sign up for PricePlow alerts:

Mimic contains a modest amount of ingredients all intended to improve your insulin sensitivity and signaling. This not only improves your body’s hormonal responses but also helps shuttle carbs trawhere they’re needed most (your muscles) and keeps them from where you don’t want them (hips, butt, stomach, etc.).

To keep fat gain at bay, it’s best to take 1 or 2 capsules 15 minutes before your heaviest carb meal of the day. Most likely this is your post workout meal or biggest meal of the day.

This is a lighter dose than most other GDAs, which sometimes can be taken before any meal containing 25-50 or more carbs. Reason being, Mimic is crazy strong!

Who’s this best for?

It’s our opinion that this is best suited to dieters or bulkers who eat bigger meals at once – so you can use this prior to one of them. If you’re a three-meals-a-day plus three smaller snacks, this will work incredibly well.

But if you’re a “nibbler” – someone who eats nothing but smaller meals all day, MIMIC might not have as much of a place. We never recommend taking a GDA if you’re not going to be dropping in some carbs shortly thereafter.

Bulkers and dieters alike can use it – we’ve had success with GDAs for both purposes… but admittedly haven’t used a GDA this strong! Time to review…

No longer do you have to live in fear of carb or a monster cheat meal. Mimic allows you to eschew your carbophobia and enjoy all the foods you did in your younger years. If you’ve had issues with carbs, Mimic is definitely worth a shot.

It’s a great stimulant-free addition to any carboholics stack that can improve insulin sensitivity, glycogen storage, and blood glucose levels. There’s simply too many reasons to try it for you to not use it.

And if you’ve been looking for a strong one for them big meals… this it.