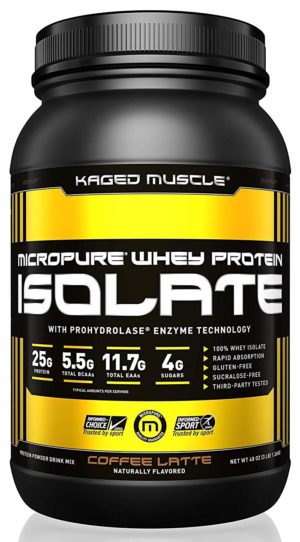 In the fall of 2018, Kaged Muscle’s MicroPure Whey Protein Isolate blew us away with its amazing chocolate flavor. The quality of the cocoa inside was downright absurd, and they used a sucralose/stevia blend to keep the sucralose levels low and avoid using acesulfame potassium, a sweetener many people react poorly to. Just prior to that review, we had interviewed Kris Gethin, who briefed us about future Kaged Muscle Isolates going completely sucralose-free.

Kris Gethin: a man who backs up his promises

Kris and the team delivered on that promise, dropping two more flavors: coffee latte and cinnamon roll, but they avoid sucralose in a very unique fashion. Do they hold up against the amazing chocolate offering?

We dig into the details on the sweeteners and added Prohydrolase digestive enzyme technology, but first take a look at PricePlow’s coupon-powered Micropure Whey Isolate prices and sign up for Kaged Muscle news alerts, since we have a lot of giveaways coming up with them (also, don’t forget to try the new Kaged Muscle Trainers App):

The fast-digesting complement to Kasein was a long time coming

Kaged Muscle’s whey isolate shook up the market when it dropped in August. A pure whey isolate by none-other-than Kris Gethin was a long time coming – the success of Kasein (vanilla was our favorite there) proved that the brand belonged in the protein game. To this day, the chocolate is the best-tasting whey isolate we’ve ever had. So these new flavors have big shoes to fill. 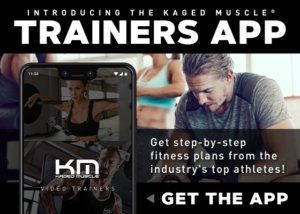 However, the new offerings are unique. So unique, they’re almost a separate product line, as noted in the review below. The two new flavors, coffee latte and cinnamon roll, have no sucralose or ace-K listed on their label. Instead, Kris, Brian Rand, and team went with honey!

The distinct flavor system arrives with different macros that set these flavors apart from the chocolate and vanilla flavors. Let’s show the review and then get into the Macros and ingredients:

The main difference you will notice amongst the flavors is the amount of carbs and sugar in each serving. While chocolate and vanilla both had under 3g of carbs while tasting incredible, coffee latte and cinnamon roll both contain 6g of carbs per serving and 4g of sugar.

Are these flavors tasty enough to justify double the amount of carbs? If you’re a low-fat dieter and are avoiding fake sweeteners, absolutely!

The new flavors: macros and ingredients

Given the lack of sucralose but added carbs from honey, we almost consider this a different product altogether. This is coffee latte’s label, which Mike enjoyed best

The nutrition for the new flavors weigh in at:

The new flavors are also nearly entirely composed of natural ingredients and flavors. There is silicon and maltodextrin on the label to help prevent clumping, but most of the sweetening is coming from honey powder and stevia. Therefore we consider the new flavors distinct from the chocolate and vanilla — the old flavors rely on artificial sweeteners while the new flavors are naturally flavored, yet with added carbs.

As a thickener / emulsifier, Kaged used a natural combination in coconut creamer, sunflower lecithin, and coconut oil into the mix to keep the flavors extra creamy! The flavors are honestly so unique that we’ll excuse the relatively lower protein by weight measurement MicroPure offers compared to its competition – much of this comes from the honey and thickeners.

And of course, at this point it goes without saying that whey protein isolate is the highly-filtered form of whey protein that is driven to 90% protein by weight, removing nearly all of the lactose, fats, and even ash from the whey.[1]

But the story that can’t be ignored is the digestive enzyme added: 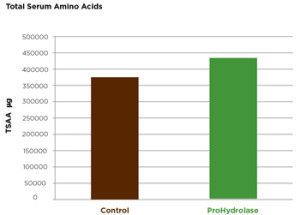 Prohydrolase speeds the break down of protein peptides ensuring a quicker digestion rate and better amino acid distribution in the body. Image courtesy of Deerland Enzymes.[1]

Prohydrolase is a patented enzyme blend. The enzymes (proteases) included in Prohydrolase help the body break down dietary proteins into their constituent amino acids, and this helps with digestion.[2] Considering an estimated 71% of Americans deal with gastrointestinal discomfort,[3] this is a great advantage that MicroPure has over its competition.

Prohydrolase begins to convert MicroPure into a hydrolyzed protein through a unique mechanism, as Prohydrolase starts to break down proteins once it’s mixed with a liquid. This sets it apart from hydrolyzed whey on the market as most hydrolyzed whey products are created through chemical treatment during the manufacturing process. No matter how you get there — hydrolyzed proteins may lead to easier digestion, faster absorption, and improved uptake[2] — which may ultimately lead to more gains and even less hunger through “protein leverage”[4] — something we’re all for. 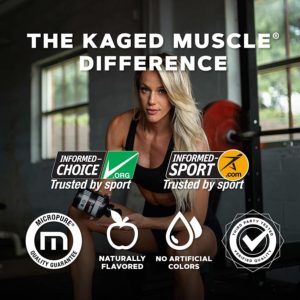 Finally, as with all Kaged Muscle supplements, all flavors of Micropure Whey Isolate are safe for drug-tested athletes, since they’re all both Informed Sport and Informed-Choice Trusted by Sport, meaning they’re batch tested against a massive amount of drugs and come up clean each and every time. This is important for serious athletes (such as those under WADA’s guidelines) who can’t risk losing it all over a no-name supplement company made in non-compliant facilities.

These new flavors are unique as they are sweet. We’ve seen honey used in the vegan plant-based proteins, but it’s not typically done in a whey alongside stevia in an effort to ditch the fake sucralose.

The new flavors give the original two a run for their money — but we gotta say, there may be no chance that the chocolate flavor will ever be matched. If you’re on the market for a new naturally-sweetened whey isolate from one of the most trusted companies around — give these flavors a shot. Of the two, we liked coffee latte best!

Up next from Kaged? Looks like we have some new Amino Synergy flavors coming too!