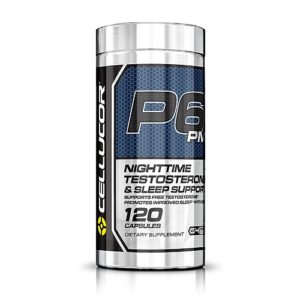 Last month, we went in depth on one of Cellucor’s many iterations of their popular anabolic agent and test booster, P6, when we showcased P6 Chrome. As we previewed in that same post, Cellucor had two other options in the works.

Details have emerged on the latest iteration — P6 PM — and we’ve got the full breakdown below.

As such, we consider this more of a great sleep aid, but aren’t going to put much credence into any “testosterone support” claims, depending on your diet. Because of that, we’ve put it into our Sleeping Pills category on PricePlow.

Before we get to the ingredients, take a second to check the best deal and sign up for alerts from PricePlow:

Rest and recovery are two key ingredients every athlete and bodybuilder needs, but sadly doesn’t get enough. The body secretes its highest levels of anabolic hormones while we sleep[1].

Testosterone is the body’s primary anabolic hormone essential for muscle-building, strength, and virility. Research has proven that the amount of sleep you get each night is directly correlated to the amount of testosterone you have in your body.[2,3]

Lack of sleep directly affects your body’s production of testosterone as well as its ability to recover and get stronger. While most test boosters focus solely on performance, P6 PM shifts its focus from training to the oft-neglected recovery time during sleep.

P6 PM utilizes a proprietary blend of ingredients to help you relax and achieve a deeper, more productive night’s rest: 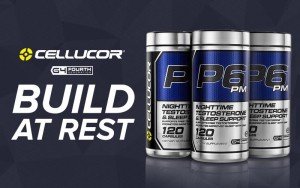 Many people put in the work in the weight room, but don’t do the “work” required to rest. P6 PM helps take care of the oft-neglected REST aspect to training.

Take one serving (4 capsules) daily, preferably on an empty stomach 30-60 minutes before bedtime. For best results, avoid taking with dairy or other calcium-containing foods or supplements.

Magnesium and calcium are both involved in bone formation and metabolism. These two minerals are absorbed by the same metabolic pathway in the body, and when taken together, their absorption is greatly impaired.[30]

DO NOT EXCEED 4 CAPSULES PER DAY. USE ONLY AS DIRECTED

Most guys are willing to put the work in through diligent weight training and nutrition, but often slack on the third element in the trifecta of muscle-building, REST. Cellucor’s newest P6 incarnation helps you cover that all important base to make sure no gains are left behind.

P6 PM contains several proven ingredients to help you power down and shut off your ever busy brain at night. Give it a shot tonight and see if you not only sleep deeper and better, but also wake up in a better state of mind! Just don’t expect monstrous rises in testosterone levels.

The rest of the P6 Family:

There are now six versions of P6 out there on the market, but a few have been discontinued or are only at GNC. We break them down below: