By now, most of us have heard from numerous health authorities that green tea and dark chocolate have many healthy properties. These two “superfoods” are packed with anti-inflammatory antioxidants that can improve metabolic health, prevent weight gain, and even protect the cardiovascular system from injury.

The reason we’re bringing these two up together is they both have high concentrations of epicatechin, a special antioxidant that’s responsible for most, but not all, of their health benefits. 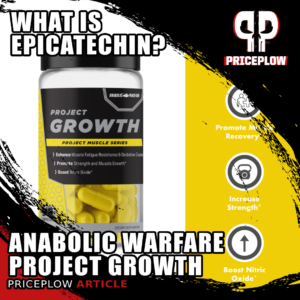 With this article about Anabolic Warfare Project Growth, we take an updated look at key ingredient epicatechin

That brings us to Project Growth from Anabolic Warfare, part of their ongoing Project Muscle series.

A quick glance at the label shows us there are just two ingredients in this product: epicatechin accounts for the vast majority of it by weight, along with a supporting dose of green tea extract.

Many readers may be surprised to see polyphenol antioxidants marketed as an anabolic supplement. Most of what’s written on the subject of polyphenols focuses overwhelmingly on their metabolic and cardiovascular benefits, with much less being said about their impact on processes like muscle protein synthesis.

But as we have often written on the PricePlow Blog, processes like MPS are downstream from cellular metabolic function. So it’s not totally surprising that a supplement intended to optimize cellular metabolism could have the indirect effect of maximizing muscle growth.

Don’t worry, we’ll get deep in the weeds on this. But first, let’s check the PricePlow news and deals:

Foods like cocoa and green tea have been identified as rich sources of flavonoids and flavonols, which are defined as flavonoids with a ketone group attached.

Compared to ordinary flavonoids, flavonols seem to be uniquely beneficial when it comes to improving health, wellness, and performance. And of the many flavonols found in cocoa beans,[1] epicatechin seems to be the most beneficial.[2]

The formal name of “epicatechin” is actually (-)-epicatechin, which we read as “minus epicatechin.” This form of epicatechin is the one naturally abundant in familiar foods like dark chocolate and tea, and is marketed as a nutritional supplement.

In Anabolic Warfare’s Project Growth, we have a 1,000-milligram dose of epicatechin extract with a 10% standardization, which should yield about 100 milligrams of pure epicatechin. Just to put that number in context, there’s somewhere between 1.5 to 2.5 milligrams of epicatechin in every gram of cocoa.[1,3]

So to get 100 milligrams of pure epicatechin from cocoa beans as a whole food, we’d have to consume about 50 grams of cocoa. 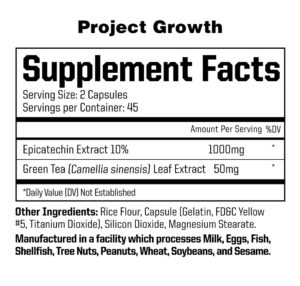 If you ate a standard-sized 70% dark chocolate bar weighing about 200 grams, you’d get approximately 280 milligrams of epicatechin – so long as the cocoa is not processed with alkali (alkalized), which destroys much of the flavonol content.[4-6]

So with a single 2-capsule serving of Project Growth from Anabolic Warfare, you’re getting about a third of the epicatechin you’d get from a full dark chocolate bar.

That might not sound too impressive, but consider the fact that you’re getting the most powerful bioactive constituent of the chocolate without adding any calories to your daily intake – and we’re still getting other beneficial flavonoids from the green tea extract. That makes it a powerful tool for bodybuilders, athletes, and anyone who aspires to change their body composition through calorie and macronutrient manipulation.

Concentrations of epicatechin in other foods 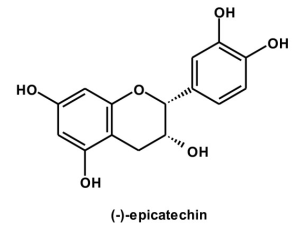 Astute readers who’ve paid attention to trends in nutrition and biochemistry can probably recognize all the foods and beverages on this list as popular superfoods. While Chinese hawthorn berries have the greatest known concentration, they’re also less common in Western supermarkets, so we put them at the end of the list.

Whenever a bunch of different highly beneficial foods turn out to have a common denominator, we should pay close attention: in this case, one important commonality is epicatechin.

When taken in efficacious doses, which we’ll define precisely in our later discussion of the research literature, epicatechin can:

Let’s go through each of these in detail.

Obviously, we see this as a wonderful ingredient that successfully straddles sports nutrition / athleticism and general health, and look forward to more research on the way.

Anabolic Warfare suggests taking two capsules daily with water. Given epicatechin’s nitric oxide boosting effects, we suggest taking it prior to training on workout days, and then just take it at roughly the same time on rest days.

Most polyphenol antioxidants will improve human health to some extent, but epicatechin is a true all-star. We’ve been excited about this ingredient for nearly a decade now, and think it’s a massive driving force in the health properties of dark chocolate, green tea, berries, apple peel, etc.

It isn’t often that we see an antioxidant with the potential to significantly amplify the anabolic response, especially not by such a specific and fundamental mechanism as myostatin inhibition and follistatin upregulation.

We’ll never promise Mr. Olympia like effects from an ingredient like this, but epicatechin can seemingly fit in any dietary regimen – and taking a supplement like Anabolic Warfare’s Project Growth can prevent you from needing to take down the calories (or cost) of an entire dark chocolate bar… which hopefully is not processed with alkali! 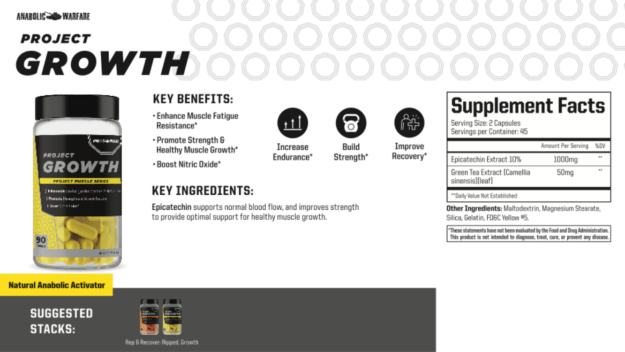