Let’s face it: we all like to have a good snack. There are times when the work we’re doing is so mentally demanding that we just need a little extra hit of glucose to get us through it – but what should we reach for in times like these?

Certainly not the standard American snack fare – potato slices fried in toxic, hyper-oxidized omega-6-laden “seed oils” that have traditionally been used as paint thinner and engine lubricant, or, in the case of linseed oil, to polish the chrome on aircraft fuselages. 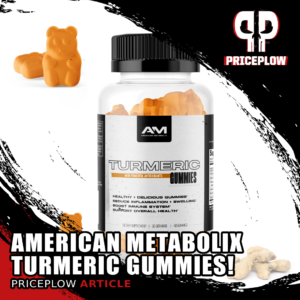 American Metabolix Turmeric Gummies are here, and they bring a hit of ginger flavor!

Those oils — which are contained in the vast majority of commercial snack foods — will actually induce profound physiological insulin resistance[1] via the Randle Cycle while being digested, thus preventing you from achieving your goal of supplying fresh glucose to your neurons.

American Metabolix Gummies are here with a healthier way to snack

As long as you’re going to carb up, it’s better to opt for some cleaner carbs that will give you energy without causing transient metabolic-devastating symptoms.

And that’s where American Metabolix Turmeric Gummies come in. But compared to all of the sweet stuff out there, these have some zing to them – because a delicious ginger flavor has been added!

We argue that this is a better way to snack. Our reasoning is below, along with a deep-dive on the curcumin-containing turmeric inside. First, let’s check prices and make sure you’re ready for American Metabolix news alerts:

With only 5 grams of carbs per serving, these gummies will help you dial in your glucose intake to just the right level – but with a sizeable dose of curcumin-containing turmeric, they can also help support your brain and reduce systemic inflammation on those days when you’re dealing with a lot of stress at work.

The sugar source for these gummies is glucose syrup – a good choice for those who are trying to avoid fructose out of concerns about non-alcoholic fatty liver disease (NAFLD).[2]

In a single two gummy serving of Turmeric Gummies from American Metabolix, you get the following:

On the flavor: note the ginger! 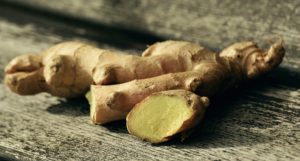 Heads up – there’s a hit of ginger flavor in these!

These gummies are a unique experience. Don’t come expecting insanely sweet candy – they actually have some kick to them, partly thanks to the black pepper extract but also the ginger flavor inside. Because of this combo, they don’t taste like “curry” – they’re pleasantly potent, and make for a great treat to satisfy a sugar craving without making you want to invade a candy store for more.

The more we try, the more we notice that the ginger flavor is what comes through more than anything!

These honestly won’t be for everyone, but if you think you might like the benefits of turmeric with a hit of sugar — not too much and not too little — then give these a shot. 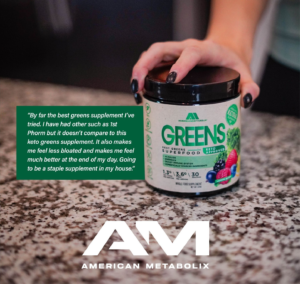 How about some Gummies and Greens? Soon, we’ll crack into the American Metabolix Keto Greens!

Takeaway: A snack with zing

If you’re gonna snack, do it right – eat something with some nutraceutical value. Anything containing turmeric, even with a smaller dose of active curcumin, is going to have some anti-inflammatory effect. If you’re the type of person that likes ginger candies, you won’t be disappointed in the flavor.

American Metabolix is adding this to their overall health stack, which includes their Keto Greens, a product we’ll be covering in the future. Get ready for the gummies and greens stack, and sign up for our American Metabolix alerts below: