We recently posted the first of likely several lawsuits over SARMs, where Nutrition Distribution is suing IronMagLabs for unfair competition. 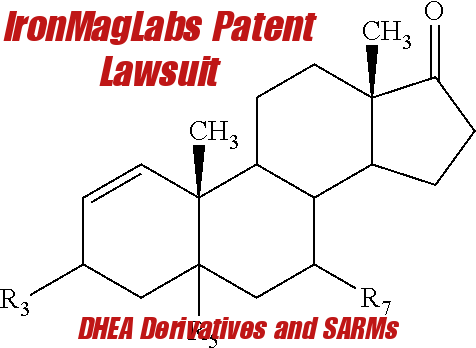 The situation has now intensified, with Hi-Tech Pharmaceuticals bringing another suit against IronMagLabs and their owner, Robert DiMaggio.

The products in question are DMZ 4.0 and Osta Rx. What was originally just a patent infringement / royalty dispute has snowballed into far more, as explained in Jared Wheat’s comment below.

The complaint filed uses some of the same arguments as the previous SARMs suit, but adds a whole lot more to the matter, including the following:

The lawsuit is 35 pages and 159 points long. You can download it below, and then we’ll briefly hit the important notes:

Intellectual Wellness, LLC is named alongside Hi-Tech Pharma as a plaintiff. It can be assumed that they are otherwise known as LG Sciences.

A few months ago, Hi-Tech bought LG Sciences. LG’s patents are still owned by their company’s founder, but Hi-Tech has the ability to use these patents in product development — and apparently to legally enforce them as well.

Let’s take the above points one-by-one:

To explain why they’re doing this, Jared Wheat, CEO of Hi-Tech Pharma, sent the following statement:

“Hi-Tech decided to go after IronMag labs for several reasons. First, when Robert Dimaggio began selling 1-DHEA, 4-DHEA and 19-NorDHEA he did so without a license from the patent owner, Intellectual Wellness or LG Sciences. They settled the matter eventually but it was like pulling teeth.

When Hi-Tech acquired LG Sciences and the exclusive distribution rights to the patents, I had been informed IronMags position was they began selling enanthated versions of the compounds, which they believed did not violate the patents. We explained why they were wrong and eventually they admitted enanthated versions were covered under the patent. However, IronMag labs began combining a SARM (Ostarine) with our patented DHEA compounds in their product Super DMZ 4.0. When we terminated their license the statement from IronMag’s owner was:

‘As far as Super-DMZ 4, yes we included a small amount of a SARM in that product. SARMs are not illegal and they are not classified as drugs. At best they are considered synthetic compounds, not much different than the Andro compounds.’

With this intellectually dishonest response, I responded telling him that I believed his attorneys were giving you bad advice as I have fought many wars in the courtroom and have an extremely high batting average in winning. Further, I explained being synthetic is not illegal as all the vitamin C, vitamins, caffeine, DHEA, amino acids, etc… would not be able to be sold if that were the case. However, the synthetic compound has to have a basis in nature in order to be DSHEA compliant.

SARM’s clearly are not DSHEA compliant as they have no basis in nature unlike the DHEA compounds we are selling. Ostarine is an investigational new drug by GTx Inc. and, therefore, could not by definition be a dietary supplement. It is not a DASCA compound but you need to be careful of the FDA, etc… I closed by saying ‘If you want to set up a call to discuss or simply choose not to sell the compounds on a go forward basis I understand and wish you success in your endeavors.’

However, I never heard back from anyone at his company and when I did hear from an acquaintance of his with no authority to bind the company I had already filed the lawsuit.

My primary goal is to protect the DHEA derivative patents we have an exclusive right to distribute and use in our LG Science, Hi-Tech, ALRI, APS or iForce Brands.

Furthermore, my goal is to insulate these compounds from SARMs to ensure that the millions I have spent in buying the LG brand; R&D on our Cyclosome technology and scaling up the raw material capacity of the compounds; and equipment for production of our proprietary Cyclosome delivery system to make these compound substantially more effective is the main basis for the lawsuit.

However, Ironmag’s cavalier attitude and lack of taking Hi-Tech’s position seriously as it should have caused us to file a pretty aggressive lawsuit, but I never fight to lose and believe offense not defense wins lawsuit just like sporting events.”

Although this case has a different purpose than the Nutrition Distribution one, the conclusion is the same: Right now does not seem like a very good time to be breaking these laws.