When it comes to finding high-protein snacks, we’ve seen just about everything. But there’s one category that’s been growing in the general food market — ready-to-eat popcorn — that hasn’t been dented at all by the sports nutrition or health food industries. 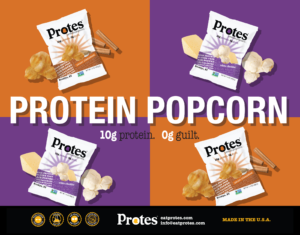 Finally, someone has found a healthy way to get protein into popcorn… without adding extra junk!

That has all changed with the arrival of Protes Protein Popcorn, a new protein-powered popcorn that’s about to generate some serious excitement for athletes and snackers alike.

You may know the name “Protes” from the protein-powered chips, Protes Protein Chips. They are often billed by health-conscious consumers as the only decent option for high-protein, no-nonsense chips on the market. Despite not being first to market, they often rank as best.

While those chips also happen to be vegan, Protes Popcorn is not – as you’ll see below, it’s a whey protein isolate based snack, and you’re going to get 8g protein alongside 10g carbs / 2g fiber – stats we doubt anyone will top anytime soon in the popcorn market!

We’ve seen a few other “protein popcorns” out there, but none are like this. Others add a dash of protein to a massive amount of chocolate or caramel glaze, which adds an absurd amount of sugar and carbohydrates while melting and making a total mess. But popcorn doesn’t need more carbs – it needs more protein and healthy fats!

You may know Protes Chips… now get ready to meet (and eat) Protes Popcorn!

So instead, the team at Protes had to find another way to get it done. Leaving us to wonder… is the protein injected?!

We’ll dig into the handful of the ingredients below, but if you’re interested, check out our prices and sign up for news, alerts, coupons, and giveaways with PricePlow below:

We did our official review on Protes, and it’s as good (if not better) than advertised – and a killer deal!

As mentioned above, these are whey protein isolate based, so they are not vegan like Protes Protein Chips are. With that out of the way:

That’s all for the ingredients — if you’re not hungry yet, we’re not sure what to tell you, because this is exactly what the health food market needed, and Protes was first to deliver a serious effort.

Calculating the Macros: Beating Popcorn by a Landslide!

First, realize that normal popcorn has roughly 81% of its calories coming from carbs, 10% coming from fat, and 9% coming from protein.[4] So if you were to get 10 carbs from popcorn alone (the same number that Protes has here), then you’d be looking at 1g fat, 2g protein, and 2g fiber, for a grand total of 50 calories. Not exactly “acceptable” to those of us who are trying to keep protein higher and carbs and fats within reason.

Now take a look at the nutrition facts for Protes Protein Popcorn: 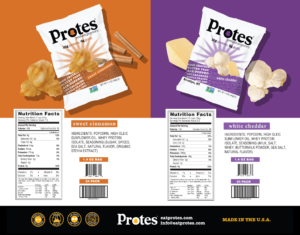 The full labels for both flavors

Essentially, what the team has done here with Protes Popcorn is re-adjust the ratios to something more reasonable. Dieters get themselves into trouble by eating too many solo carbs without the protein, and then the next thing you know, they’re not satiated and are still falling short on their numbers.

This solves that and doesn’t let your carb count “drift away”.

Plus, nobody’s eating 10g carbs worth of solo popcorn. Another way to look at our comparison above is to see how 150 calories of popcorn alone gives you — and it’s about 30g carbs, 5g protein, and 2g fat.

That’s a very lopsided 150 calories! Unenhanced air-popped popcorn might be acceptable to low-fat dieters, but low-fat diets increase the risk of death, so it’s probably best to try something in the other direction.

Team PricePlow is on the salty side

As mentioned in the “Seasonings” section above (as well as all the pictures), Protes Popcorn is launching with Sweet Cinnamon and White Cheddar. Note: A year after publishing this blog post, Protes Rebranded its Bags and added a Light Butter flavor.

Also, as mentioned above, we foresee this product being a massive success, and there will be requests for more flavors, which we assume Protes will gladly try to deliver. This is why you should sign up for alerts below using PricePlow or on our Protes news page.

A few words from the brand

Krik Angacian, co-founder of the Protes brand told us how excited they are for this launch, and how long it’s taken them to get it right. At first, they tried to stick with the Vegan route, given the success of their Protes Protein Chips. However, they realized that they’re not necessarily a vegan company – they’re more of a protein snack company!

Krik went on the record to Food Navigator:

“We wanted something with at least 10g of protein because any less than that and the sports nutrition consumer won’t be interested, but we just could not get a vegan white cheddar product to taste good, it had this awful grainy mouthfeel and taste. We tried pea, rice, hemp and other proteins but once we added in the level we wanted it just got too granular.

Eventually I sat down with Ryan and said are we a vegan protein company or are we a protein snack company? And we made the determination that we are a protein snack company, and once we started working with whey protein isolate, we came up with something that tasted phenomenal. It has a very familiar taste, texture and mouthfeel but delivers all that protein as well.”[5]

To wrap things up… it’s about time!

First time seeing Protes? Check out their chips too – which also happen to be vegan, but don’t let that scare you!

Protes hit a grand slam with their Protein Chips, making everyone forget about Quest. But they needed to make their next move, and with that brought a bit of an existential crisis.

We’re glad to say that they chose the right path – for protein and flavor – and now the PricePlow family is truly excited to dig in.

Everyone has a protein powder, and protein bars are quite saturated. But what about those of us who want something crunchy?! Or at least a bit less chewy?

For those of us who are okay with some carbs, but just don’t want to leave our protein numbers in the dust, Protes Protein Popcorn hits the spot.

The only question is… do you want your popcorn salty or sweet?!