Is Enclomiphene the Testosterone-Enhancing Drug We’ve Been Looking For? 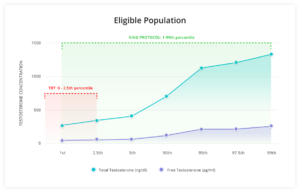 TRT has its drawbacks, which are covered below. But enclomiphene can safely reach a greater demographic of users, including young men who may still want children and/or don’t want to be on TRT for the rest of their lives

In episode #062 of the PricePlow Podcast, we introduced Dr. Cameron Sepah of Maximus to our followers. Maximus is built to support men in their quest for testosterone optimization, and one major tool they use is a prescription of enclomiphene alongside blood testing, adjunct supplements, and community support.

In this article, we dive deeper into enclomiphene, but we encourage everyone to go back and listen to the podcast linked above and read the show notes, as it covers so much more than the drug itself.

Before driving into enclomiphene, we introduce the problem of declining testosterone and the drawbacks of using TRT (testosterone replacement therapy), and then present the prescription drug that’s getting so much attention thanks to Dr. Sepah and the Maximus Tribe:

As we get older, all kinds of biological functions in our bodies start to slow or break. For men, one of the biggest concerns is an eventual decline in testicular function, and, as a result, the eventual decline of serum testosterone levels.

In all humans, there is an enzyme called aromatase that’s responsible for converting testosterone to estrogen. As we age, aromatase activity increases,[1] meaning that even if you manage to produce the same amount of testosterone today as when you were younger, you will still end up with lower testosterone blood levels as more and more of it gets converted to estrogen.

But unfortunately, we don’t produce the same amount of testosterone as we age. The older we get, the greater the burden oxidative stress will have on our body,[2] and over time, this increased oxidative stress compromises testicular function.[2]

If this impairment is severe enough to push a man’s testosterone blood levels below 300 ng/dL, we refer to this type of testicular dysfunction and low testosterone as “male hypogonadism”. 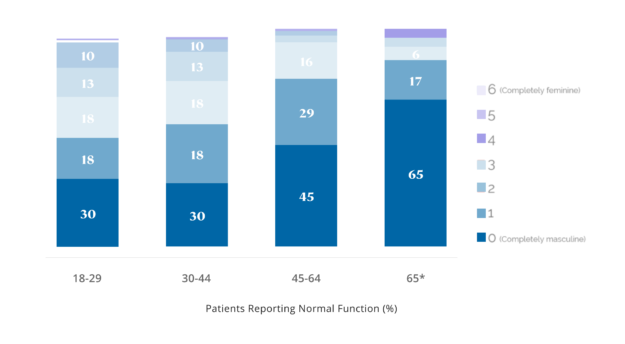 Due to an onslaught of endocrine-disruptions, men’s hormonal systems aren’t working like they used to. Maximus has a three-pronged solution called the KING Protocol. Image courtesy Maximus.

There are other contributing factors to male hypogonadism, but these are the two big ones – and although they can be mitigated by healthy lifestyle choices, they are fundamentally unavoidable. 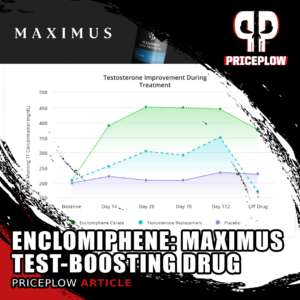 That’s a pretty big deal, and it’s something that all men should be thinking about — even if you’re still in your 20s — in case it needs to be addressed one day.

However, although less common, hypogonadism can occur in much younger males. If you’re having classic symptoms of low testosterone, the only way to rule out hypogonadism is to get a testosterone blood test from your doctor.

So if a man has low testosterone, the solution seems simple: just inject testosterone to bring those blood levels up with TRT, or testosterone replacement therapy. Easy, right? 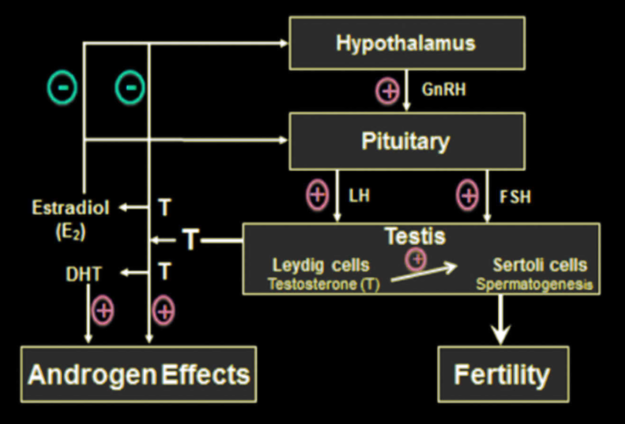 The conversion of testosterone to estradiol via aromatization suppresses the production of LH and FSH via negative feedback.[4]

In primary hypogonadism, testosterone replacement therapy (TRT), when you supply the body with exogenous testosterone, is pretty much your only option.[6]

But in secondary hypogonadism, the picture is a bit more complicated. In these cases, simply taking testosterone is probably not the best idea.

TRT is not best for secondary hypogonadism

Unfortunately, because of that enzyme we talked about earlier – aromatase – a significant amount of extra testosterone from TRT gets converted into estradiol (E2), which is a form of estrogen. When the surplus E2 acts on cellular estrogen receptors in the hypothalamus and pituitary glands, that sends a signal to your body to produce less luteinizing hormone (LH) and follicle stimulating hormone (FSH). 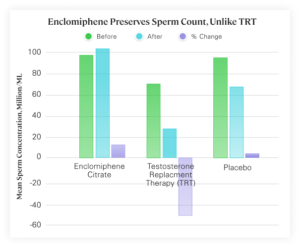 Look at what TRT does to sperm count! If you’re planning on having kids, getting on exogenous testosterone isn’t the best idea. But as you can see from the other parts of the chart, there’s a better way, though… keep reading… Image courtesy Maximus Tribe

As you can see from the inset graphic, LH and FSH are necessary for telling the testicles to produce more testosterone – so the long-term effect of TRT, owing to this action on estrogen receptors, is that men with secondary hypogonadism who receive TRT end up with significantly reduced fertility,[4] and often lose their ability to produce testosterone endogenously (i.e. without external supports).

That means that even if you have normal testicles before you start TRT, once you start it, you can end up dependent on external testosterone for life. And if you stop using it, your testosterone levels and fertility will be even worse than they were before starting TRT.[7]

Long story short: If you’re relatively young or may want children in the future, and don’t suffer from primary hypogonadism, steroid abuse or testosterone replacement therapy is not the best idea.

But what if we could raise testosterone levels while also changing (modulating) the action of estrogen receptors?

Theoretically, if you had a way to block the action of estrogen at the receptor, the aromatization of excess testosterone to E2 wouldn’t matter because that E2 doesn’t have an effect on the hypothalamus or the pituitary unless the estrogen receptor (ER) is actually activated. 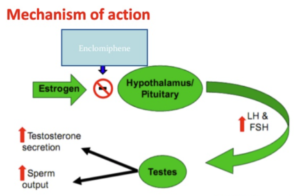 In other words, low-IA SERMs block the action of strong estrogens by occupying the ER in their stead.

Conversely, high-IA SERMs have a high degree of estrogenic activity.

But today we’re going to talk about an awesome low-IA SERM: enclomiphene.

Enclomiphene: For men, the better part of clomiphene (Clomid)

Enclomiphene is one of two stereoisomers of a drug called clomifene, which is more popularly known as “Clomid”.[9] Clomiphene is a mixed agonist and antagonist of estrogen, and is used to treat infertility in women.

The “selective” part of the acronym SERM refers to the fact that each SERM has tissue-specific activity on the ER. In the case of enclomiphene, the estrogen-antagonist stereoisomer of clomifene, its anti-estrogenic effects are primarily in the pituitary.[4]

The problem with clomiphene

When men are given Clomid in an attempt to increase their fertility and restart their endocrine systems, they often get a nice initial bump in testosterone (from the enclomiphene side). However, the issue with clomiphene is that the zuclomiphene isomer has a far longer half-life,[10,11] and continued use of the drug leads to extremely estrogenic results in men, as the circulating zuclomiphene far outlasts the enclomiphene. 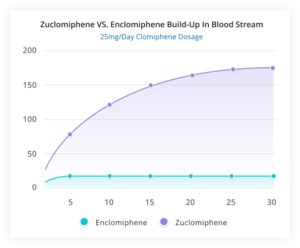 The problem with Clomid: The estrogenic zuclomiphene isomer lasts way too long. The solution? Remove it and use enclomiphene only! Image courtesy Maximus Tribe

Because of this estrogenic imbalance, clomiphene isn’t the solution for most men, because it brings too many feminizing side effects over time. It’s not uncommon to hear about mood swings and men weeping during movies when on Clomid. However, if only using the anti-estrogenic side — with enclomiphene alone — far greater results are seen – without the emotional rollercoaster.

Enclomiphene’s pituitary-specific estrogen antagonism makes it the perfect candidate for interrupting the negative feedback on testosterone production that we discussed earlier, and what makes TRT so problematic.

By antagonizing ERs in the pituitary tissue, enclomiphene can boost testosterone production in men with secondary hypogonadism.[4] No exogenous testosterone is required either.[4]

Clinical Evidence for the Efficacy of Enclomiphene

Although there are actually a lot of clinical trials for enclomiphene, they’re pretty similar in design and outcome. So, let’s briefly run through a few, in chronological order: 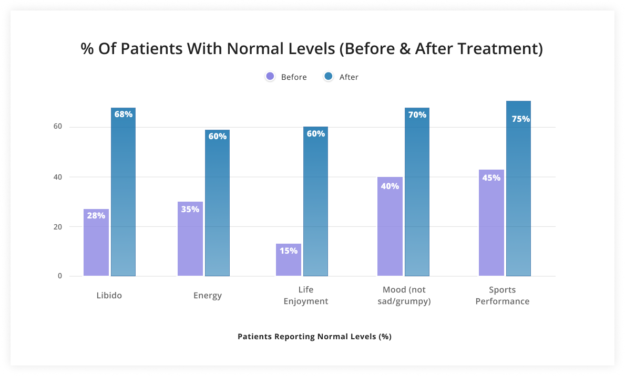 Enclomiphene Before and After

So you can see that enclomiphene is a very promising drug for men with secondary hypogonadism – basically, most of the upside of TRT (TRT can produce supra-physiologic levels of testosterone, whereas enclomiphene cannot[4]), with none of the typical downsides.

For the vast majority of men reading this article, the data suggests that enclomiphene is a far better solution than TRT — and definitely a better solution than pro-estrogenic clomiphene. This is the drug many men have been looking for – and it’s orally available through a prescription via telemedicine.

More good news: enclomiphene, having been studied extensively in clinical trials, seems to be generally well-tolerated.[4]

Although SERM use is typically associated with an increased risk of venous thromboembolism, in the case of enclomiphene, the incidence rate of this side effect is very low.[4] 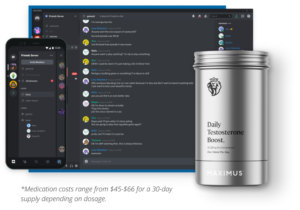 It’s not just about drugs – it’s about community and coaching too! See the Maximus KING Protocol

Enclomiphene does appear to lower the body’s production of insulin-like growth factor 1 (IGF-1).[4] Researchers speculate that this is due to enclomiphene having anti-estrogenic activity in liver tissue, but the exact mechanism by which enclomiphene lowers IGF-1, and the ultimate implications of this effect, remain unclear.[4]

Mild side effects, such as headache and nausea, were observed in less than 4% of patients.[4] Of the 481 subjects who undertook the phase III clinical trial, only 11 were unable to complete the study.[4]

However – in one of the phase III trials, Kim et al. 2016, there was a 21% increase in adverse effects, including elevated triglycerides, hematocrit, and hemoglobin, which may or may not have been caused by the enclomiphene.[15] It should be noted that there was no significant difference between the enclomiphene group and the placebo group, but out of an abundance of caution, anyone interested in trying enclomiphene should review this study.[15]

How do I get enclomiphene?

If you haven’t done so already, now’s the time to head back to our podcast with Dr. Cameron Sepah and take a look at Maximus. Maximus is providing enclomiphene as part of their KING Protocol package, where they have a telemedicine call with you, ship you a small dose of enclomiphene to begin, and send an at-home blood test to take before administration. 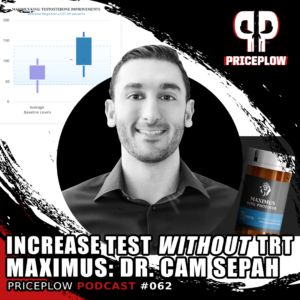 Meet Dr. Cameron Sepah, founder of Maximus, whose here to help you boost testosterone in a clinically-meaningful way without TRT. Prepare to learn a ton about enclomiphene in this episode!

Note that Maximus sponsored the podcast and this article, but the enclomiphene studies were performed by pharmaceutical companies that mysteriously shelved the ingredient until Maximus brought them back to market.

It’s worth adding that we also encourage men to clean up their sleep, diet, mindset, and even their choices of clothing and plastics, as discussed in the podcast. Modern society has brought an onslaught that has dropped our testosterone levels to new lows. By removing the plastics, toxic oils, screen time, and other processed garbage that didn’t exist before our “mandemic”, we may be able to reclaim our virility naturally.

But while you work on that, enclomiphene and the Maximus KING Protocol – along with its support community – seem like a great strategy to get results quickly. In the show notes linked above, we also provide some feedback and bloodwork from Maximus’ clients.

Conclusion: Enclomiphene is what many are seeking

The bottom line is this: if you’re a man who’s feeling low energy, has a low libido, can’t concentrate, and is just generally not enjoying life, go to your doctor and get your testosterone levels checked.

If you end up getting a secondary hypogonadism diagnosis, then enclomiphene is eminently worthy of your consideration as a treatment for your condition.

But as always, talk to your doctor, schedule a telemedicine visit with Maximus, and get a prescription first.

Learn more in our podcast with Dr. Cameron Sepah and at MaximusTribe.com