Hi-Tech: Will Take DMAA Case to Supreme Court if Necessary

On April 5, 2017, Hi-Tech Pharmaceuticals will issue the following press release regarding the latest updates to their DMAA lawsuit against the FDA (the final paragraph is by far the most interesting, so hang in there):

Hi-Tech’s CEO, Jared Wheat, said he is “going to continue to fight for DMAA until Hell freezes over, and then fight on the ice.”

ATLANTA, April 5, 2017 — Hi-Tech Pharmaceuticals, Inc. (Hi-Tech) wants to give an update to the industry on how the battle of David vs. Goliath is progressing in the fight for DMAA. In light of the Court’s recent Order, there have been a lot of questions surrounding recent events concerning DMAA that Hi-Tech felt it needed to address.

Relevant to this case, dietary ingredients include “an herb or other botanical . . . or a concentrate, metabolite, constituent, extract, or combination of” an herb or other botanical. 21 U.S.C. § 321(ff). Accordingly, the first issue that must be determined under the statutory scheme is whether DMAA is a “botanical” as that word is used in tATLANTA, April 5, 2017he statute. The Government stipulates that it bears the burden of proving that DMAA is not a botanical …

The Government asserts that a botanical is “a plant, alga, or fungus, or a physical part or secretion of a plant, alga, or fungus, such as bark, leaves or fruits.” In support of this assertion, the Government cites to the affidavit of its expert, Cara Welch. In her affidavit, Dr. Welch gives generally the same definition of a botanical and cites to her report. Dr. Welch’s report gives that same definition for botanical and cites to an online FDA publication that gives the same definition in its glossary without citation to anything. The FDA publication merely purports to provide guidance to industry regarding the requirements of providing notice to the FDA relating to new dietary ingredients. The publication does not appear to be a scientific paper and there is no indication of who wrote it. In short, the Government has failed to provide an adequate basis for its interpretation of Congressional intent in using the term “botanical” in § 321(ff). This Court thus finds that the Government’s definition is arbitrary and not entitled to deference under Chevron, U.S.A., Inc. v. Nat. Resources Def. Council, Inc., 467 U.S. 837 (1984).

The Court further acknowledged Hi-Tech’s proffered science demonstrating the presence of DMAA in the geranium plant:

Hi-Tech has presented fairly substantial evidence that trace amounts of DMAA have been found in a species of a geranium plant in the form of three published papers that provided the details of tests detecting DMAA. The Government has asserted three arguments to dispute the presence of DMAA in geraniums, but this Court finds that those arguments are not sufficient to meet the Government’s burden of establishing that DMAA is not in geraniums. This Court is first unimpressed by the Government’s arguments regarding the fact that other studies have failed to find the presence of DMAA in geraniums. In particular, this Court takes judicial notice of a paper, Thomas D. Gauthier, Evidence for the Presence of 1,3-Dimethylamylamine (1,3-DMAA) in Geranium Plant Materials, ANALYTICAL CHEMICAL INSIGHTS, 8: 29-40 (2013) available at https://www.ncbi.nlm.nih.gov/ pmc/articles/PMC3682735/, in which the author surveyed the various studies that either found or did not find DMAA in geranium plants. He concluded that, “[o]verall, these studies show that 1,3-DMAA is found naturally in some, but not all, geranium plants and extracted geranium oils.” The author further opined that the studies that failed to find DMAA used extraction techniques that may not have been suitable for retention of DMAA due to its volatility. It is undisputed that at least three different studies found DMAA in geraniums, and the fact that other studies, which may well have used different methodologies, did not detect DMAA is not determinative.

This Court is likewise unswayed by the Government’s argument that it is impossible for the geranium in question to synthesize DMAA. In its motion for summary judgment, the Government asserts that: “The uncontroverted evidence is clear: Geraniums cannot make DMAA. There is no biological process or biosynthetic pathway by which a geranium plant could do so” …

Finally, in response to the Government’s argument that the geraniums from one of the studies may have been contaminated by fertilizer that contained DMAA, the argument fails to address the fact that other studies did find DMAA …

This Court credits Hi-Tech’s argument that a botanical can be synthesized in a laboratory without losing its status as a botanical under § 321(ff). Indeed, growing popularity of a substance in a certain plant might endanger that plant’s existence if manufacturers were not permitted to synthesize the substance without running afoul of the requirements in the DSHEA, and chemical synthesis is often more economically efficient than extracting a particular compound from a plant.

Despite these favorable findings, the Court wrongly concluded that for a substance to be considered a “botanical” that there must be at least some history of the substance in question having been extracted in usable quantities from a plant or a plant-like organism. According to the Court, “[t]o hold otherwise would be to open the door to bogus claims that, for example, a given chemical had been detected in a fungus found only in a remote Tibetan river valley, and the FDA would be left to refute that claim – to prove a negative – which the instant case demonstrates is not easily done.” 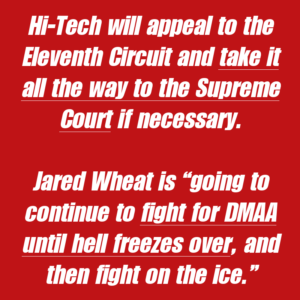 If you thought this case was over, then you don’t know Jared Wheat.

It is Hi-Tech’s position that the Judge’s conclusion constitutes clear error in the following respects:

Hi-Tech believes that the Court’s failure to find that DMAA is a constituent of a botanical, which would have led to Hi-Tech winning on summary judgment, constitutes reversible error. Hi-Tech is optimistic that its motion to reconsider will be successful. If it is not, however, Hi-Tech will appeal to the Eleventh Circuit and take it all the way to the Supreme Court if necessary. This could extend this litigation for several more years. Hi-Tech’s CEO, Jared Wheat, said he is “going to continue to fight for DMAA until Hell freezes over, and then fight on the ice.” Hi-Tech will of course continue to supply its customers with DMAA-containing products until there is a final, judicial determination.

In addition, Jared Wheat will be providing a full legal opinion by the end of the week.

Where to go next?