SupplementReviews.com is heralded as the place to go for high quality, in-depth, brutally honest supplement reviews. 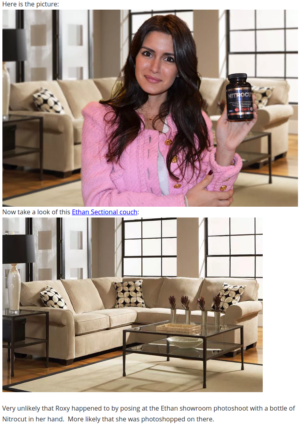 While nearly all of the reviews and analyses on the site is provided by the users, the “SR” staff often gets into the mix – especially when they see something extremely offensive or dishonest. That’s where we find ourselves today.

Tommy Noonan, the owner of SR, recently posted a rather in-depth article about a spam e-mail he received promoting a capsule-based pre workout named Nitrocut, made by Powerhouse Formulations LLC. You can check out Tommy’s post on SR, titled “Nitrocut is an underdosed, overpriced product (who had their attorney send us a threatening letter)“ for all the gory details, but here’s the gist of the piece: 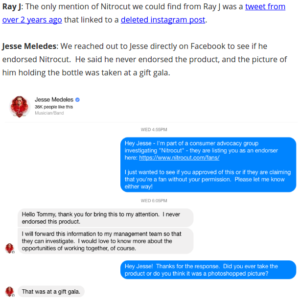 Nitrocut even stoops as low as to get fake / unconfirmed celebrity endorsements on their site!

On the Nitrocut website, they list a number of “fans” who are celebrities and other well known personalities that have allegedly used Nitrocut and strongly advocate for the product. Digging deeper, SR’s piece reveals that either the celebrity never actually used the product or that photos shown with people using the supplement were photoshopped!

Nitrocut’s website also lists several well known fitness-related websites in an “As Seen On” section. Included in these are the likes of Maxim, Men’s Journal, and Muscular Development.

After conducting a thorough search of the listed sites, SR found not one single mention of the Nitrocut on ANY of the websites claimed that the product was featured on! Admittedly, it’s possible they advertised on those sites though, but does that count? To Tommy it would not. 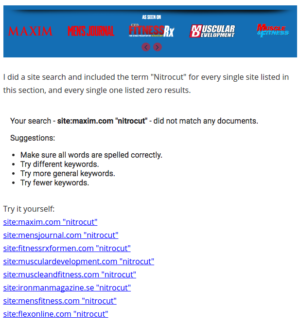 Think you’ve heard of Nitrocut before in some famous fitness publication…nope those are fake too!

Legal letters are a common intimidation tactic used by companies in such a situation, and could lead to more stern measures in the future, but are typically the first step in getting something taken off the web.

Not one to easily back down, Tommy consulted legal counsel, and came to the conclusion that Nitrocut is just trying to bully him, but actually has no grounds for demanding its removal. Tommy believes that his post is 100% true, is a fair analysis, and there has been no crime committed by he and his team.

After that, Tommy and Team SR doubled down, keeping the post up for all to see, published the legal threat, and shared this news on social media. (This is where we found out about it here on PricePlow). SR states that they will continue to post any further “threats” Nitrocut and Powerhouse Formulations care to send his way!

Now that the dust has settled from the whole ordeal, we reached out to Tommy at SR to see if he had any further comments regarding the situation and how he feels about the way things went:

”It’s just really unfortunate that this is how someone chooses to run their business. I think there’s plenty of ways to make an honest buck; however, some folks will always choose to take the path of deceiving customers and then making threats when called out. At SR, we’re trying to help folks see the full picture, and aren’t afraid to show you what some of these companies are trying to hide.”

Nitrocut’s ingredient panel is extremely underwhelming to say the least.

Mike with PricePlow here. First, we believe that Tommy’s analysis is spot on – Nitrocut contains an underwhelming formula (at best) and we’ve seen far more potent products at lower prices. Any of our regular readers will agree to that; it’s basically without dispute.

If Tommy saved even one consumer their hard-earned money, it was worth the fight. But understand that he too has a business to run – and when he has to spend over half of his day investigating a product, he’s not moving his business forward.

Choosing what to write about is a very difficult decision. We could spend all day writing about affiliate marketing scams – they’re all over the net – and it’s something we’ve done before. It’s important to us, just like it is to Tommy, that users get great deals on quality products.

Can you take on all of this scum? Where is the balance?

But the question is how to balance your time. While we want to “save” lesser-informed users, we also want to project positivity and talk about things we believe in, not always attack things we despise. There’s only so much time in a day, but perhaps blog posts like SR’s Nitrocut analysis are occasionally in order.

Meanwhile, because affiliates with no ethics or morals can get up to 50% commissions on such nonsense, you’d end up fighting ten thousand ankle-biters who have several dangerous spam tools at their disposal.

One thing they don’t tell you when you start a real business (not just some affiliate marketing BS) is how much lawyering you’ll be doing. PricePlow currently has three law firms under contract, and we’re in touch with several others. Yes, it’s ridiculous, but that’s the state of American business anymore.

But just like Tommy, we will fight for our First Amendment rights – especially when something is truly egregious and worth writing about.

Doing the right thing, time and time again. But how can SR keep up in this game of whack-a-mole?!

Nitrocut isn’t doing anything that hasn’t been done before – it’s an absurdly overpriced, questionable supplement that we would never recommend. It’s just one of the newer kids on the block. The supplement industry (especially the direct affiliate marketing sector) is littered with garbage made solely for companies to turn a major profit with little regard for you and your health.

Tommy did a great thing here, keeping readers aware of what’s happening behind the scenes when they see these ridiculous advertisements. Just like SR, it’s our mission to be a consumer advocate and industry watchdog to help you sort out the real gems out there from the turds – yet there’s only so many things you can write about.

We believe it’s best to instead “teach consumers how to fish” so that they know how to spot a bad label themselves. Posts like Tommy’s can indeed show you how to do that.