Arms Race Nutrition VEGAN protein powder has launched… and it has inclusions!

One thing that people on a plant-based diet discover is that it can be difficult to get enough protein from whole-food plant sources. That applies for those who are dairy-free as well.

Generally speaking, plant proteins are less digestible and, hence, less bioavailable than animal proteins. This means that the dietary protein requirement for vegans and vegetarians is actually higher than that of omnivores and carnivores (since your body uses less of the protein you consume). 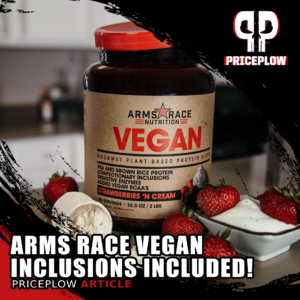 Arms Race Nutrition Vegan is here, with a pea + brown rice blend… but more importantly, it has inclusions!

It’s not impossible to get enough protein from whole foods on a plant-based diet, but it’s easy to overlook if you aren’t paying close attention to what you eat. If you’ve decided to forego meat, or even all animal products entirely, you should track everything you consume and calculate your total protein intake to ensure it’s adequate.

For the many athletes, vegans and vegetarians who will discover that they’re not getting enough protein from food, Arms Race Nutrition has a new vegan protein powder that we suggest trying. That said, this product definitely appeals to more than just people who don’t eat meat.

This powder is based on pea protein and brown rice protein – two plant proteins that are relatively digestible and together cover all nine essential amino acids.

Arms Race VEGAN has launched in a couple of delicious flavors right off the bat – and as mentioned up top — many of the flavors have inclusions, something we don’t see in vegan protein powders! And more flavors are coming…

Arms Race was clearly careful in formulating these flavors to overcome a problem that’s typical of vegan protein powders: namely, it’s very difficult to find a vegan protein powder that has great flavor, texture, and nutritional quality. Below, we show how they did it:

Meanwhile, some may just be most excited about the other ingredients inside – the inclusions! 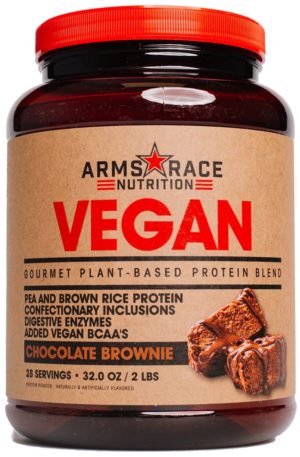 Below is the full list of flavors of ARN Vegan:

Arms Race Vegan is a solid protein powder by any standards, not just vegan standards. With delicious inclusion-based flavors, relatively digestive protein choices, extra BCAAs, and supplemental digestive enzymes to maximize bioavailability, in addition to vegans and vegetarians, we recommend this protein powder to any athlete who’s in the market for one.

Plus, we find it reassuring to see two protein sources, specifically those that have been shown to perform as well as whey, included in this formula.

Stay tuned for more from Arms Race, more flavor extensions in other products are on the way!