Great news for iForce fans dropping some pounds this summer – the long-awaited release of their Thermoxyn fat burner is here!

In this post, we’ll get into the ingredients and clarify a bit of confusion on the name.

Expect some strength with iForce – but more reasonable this time 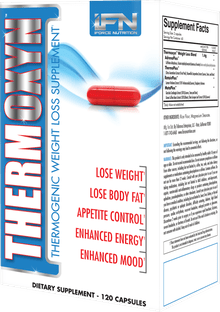 iForce Thermoxyn is out! We dig into the backstory and ingredients below

iForce is no stranger to some stiff stimulant blends in their fat burners and pre workouts — and we honestly expect a pretty strong one here as well.

However, it looks like things are toned down from the Dexaprine and Dexaprine XR days, when the products were so strong that many users had to break the tablets in half! You’ll still want to start by following the instructions, which state,

This definitely looks more reasonable, but I’d express caution to any stimulant sensitive people, especially women and smaller guys — this is an iForce product, so don’t be surprised if the full 4 capsule daily dosage is very potent. 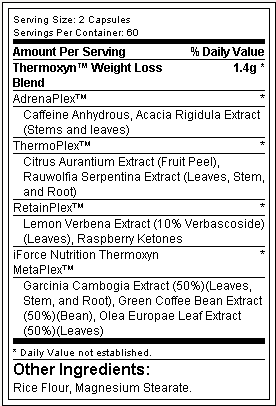 The product is one massive 1.4g proprietary blend, broken into four proprietary parts. The lead ingredient is caffeine, but we do not know how much caffeine is in it.

-2 points for iForce for lack of disclosure — we can tolerate some proprietarity, but this is far too much.

We won’t waste your time explaining it, we all should know what caffeine does at this point. While it’s not the fat burner, it does get the process moving.

The trend has been to move away from high doses of caffeine (especially if you’re asking users to take up to four caps in a day), but users still want a good dosage of the stim. There’s simply no way we’ll be able to tell how much is in this one unless iForce discloses, which I believe they will.

Ahhh, acacia rigidula. There’s all sorts of goodies in this plant, as you can see from the list below.[1] They include all sorts of PEA, dopamine, tyramine, N-Methyltyramine, dopamine, hordenine… and then some crazy stuff, like nicotine, mescaline, and even methamphetamine: 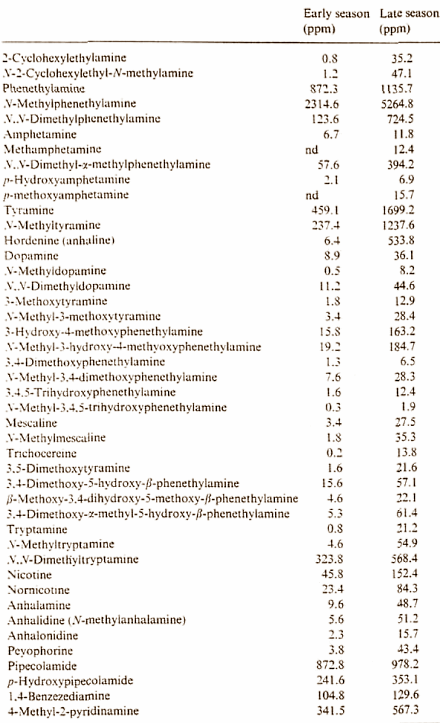 This is all of the stuff you can get from acacia. Yes, that is meth you see on this list. What an awesome plant.

While we’re certain that iForce isn’t putting anything illegal into this product (they’re too big and too smart to do anything that ridiculous), the problem is that we simply don’t know what they’re standardizing for.

Bring on the real acacia

What we do know is that they’re claiming to use a real stem and leaf extract, which is great news.

Apparently, some other company (whose name won’t be mentioned here) had been supplying much of the supplement industry with spiked “acacia rigidula” extract. It contained forms of PEA that simply weren’t found in any normal concentrations in real acacia.

A study published earlier this year showed that 9 out of 21 supplements containing “acacia” had been adulterated with beta-methylphenethylamine (which is not found in nature, and is quite similar to amphetamine).[2] Those most likely came from the aforementioned supplier, who will likely have their day in court.

That said, we’d still like to know what goodness they’re standardizing on.

Citrus aurantium is typically used for its synephrine content, but can also be used to get octopamine and tyramine.[3] Once again, we don’t know for what.

iForce has used both octopamine and synephrine in past products.

Warning: For those of you being drug tested, note that synephrine is allowed by WADA, but octopamine is not. You will need to confirm with iForce what is getting extracted here, since we don’t know.

Synephrine works similarly to ephedrine and one study noted that it improves resting caloric expenditure but doesn’t change your blood pressure.[4]

Octopamine works differently and in a more complex way — it sends several mixed signals to your body. For instance:

But once again, we don’t know which one iForce is using (if not both)… or in what dosage…

Rauwolfia serpentina is almost definitely used to get rauwolscine, which some refer to as alpha-yohimbine. This is extremely stimulatory an is typically used in small dosages.

Unfortunately, there’s not much research on rauwolscine itself — more of it is done on yohimbine. The biggest thing to note is that it is definitely a potent alpha-2 antagonist[7,8], meaning it prevents fat storage.

Popularly used as a tea, this is an anti-stress antioxidant, especially during chronic exercise bouts.[9]

Basically useless garbage, especially at such small doses that they’ll be in this product. We discuss this on our raspberry ketones page and don’t need to go further.

Likely added for marketing purposes – they’re basically stuffing extra popular keywords into the product. Not a bad idea, but don’t expect small doses of this ingredient to do anything but look pretty on the label.

In the three acceptable studies done on weight, two of them failed to do anything[10,11], while the third had slightly more weight loss but no other effects typically marketed with this ingredient.[12]

Another keyword stuffer to please the Dr. Oz fanbase. This one, on the other hand, actually has some semi-decent science behind it, but it depends on the dosage of the main ingredient, chlorogenic acid, which is best taken between 150-300mg.

We discuss this more heavily in detail on our green coffee bean extract page.

But again, we don’t know what’s in here or how much chlorogenic acid has been extracted.

At the end of the day, most benefits are on circulation and blood pressure[13], not the “fat loss miracle” that some promoters claim it to be.

Olive leaf extract. The oleuropein constituent is typically the star here. It provides improved insulin sensitivity and good protection against LDL cholestrol oxidation[14], and is rather healthy even in low dosages, as seen in olive oil.

This is one of those situations where doing more research made me realize how little we know about this product. It will likely be strong and feel good, but it’s impossible to determine anything of importance from the extremely proprietary label.

iForce is one of our favorite brands, but it’d be awesome if they could open this label up like other companies have been doing. Not even displaying the caffeine content seems ridiculous at this point.

However, this is in line with their past products, which have been successful. We just hoped things had changed at this point in the game. It’s just too tough to recommend until we actually try it.

If you’re still interested in checking it out, see the price comparisons below and check out the reviews at the stores. Just because we don’t have the information we want doesn’t mean this product isn’t well-formulated under the hood!

What’s with the Google Spam?

When searching for Thermoxyn, we immediately hit way too much nonsense. It turns out that iForce had a product with this very same name – way back in like 2005. 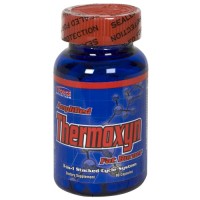 So when Googling for it, what you find are a few legacy stores that have discontinued pages, and some ridiculous scammy fat burner review pages that try to unsell you on this product so that they can sell you on their garbage “free trial”.

Hopefully in due time Google will destroy those dirtbag sites, but until more quality stores have it in stock, you’ll see mostly nonsense like that.

Anyway, if you see the image to the right, that is not the product you want – this is the 2005 version. The 2005 version will mention a TransPlex and cAMPlex — the new one doesn’t. So let’s look at the new stuff instead.