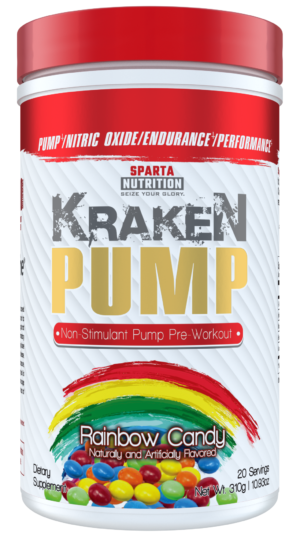 Sparta Nutrition is releasing the pumps with the release of its stimulant-free pre workout supplement, Kraken Pump.

Sparta Nutrition has been one of the hottest young companies since first breaking on the scene with their hit high-energy and pump pre workout supplement, Kraken. Over the past year, the company has undergone some big changes, and with that, we’ve seen some interesting and well-dosed formulas, most recently in their intra workout Hydra8 BCAA and the delicious coffee-flavored morning fat burning drink, HydraShred.

The team built to help you “seize your glory” are back again, and this time, they’re ready to unleash another Kraken, but with no stimulants. Kraken Pump is a stimulant-free, pump boosting pre workout sure to help even the most nitric oxide-deficient individual get a massive pump!

And one unique thing that not enough brands have done? It optionally comes in an unflavored version in case you just want to add it to your existing pre workout! But you know we’re all about that Bombsicle…

All the details on this stim-free pump monster are ahead, but first, take a moment to check the best deal and sign up for alerts on PricePlow:

Kraken Pump includes a list of ingredients to enhance your pumps from multiple fronts — increasing nitric oxide via two different ways and improving cellular hydration. At one scoop Kraken Pump is impressive, but at two scoops (the ideal serving!) you’ll have a pump experience that may give the best pumps on the market!

Note: Doses listed below are based on one serving (i.e. one scoop).

” Kraken Pump was formulated with one purpose in mind: the pump. If you’re looking for an unreal pump, taking a stim break, lifting and night and want to go to bed, or just want to enhance your KRAKEN experience, it’s time to add Kraken Pump to your pre-workout stack.

Kraken Pump can be used with Kraken for the ultimate pre-workout experience, or on its own as the ultimate non-stimulant based option. Kraken Pump will enhance pumps, induce skin splitting veins, and aid with performance.“ 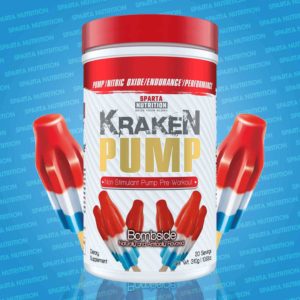 Kraken Pump comes in three delicious flavors, as well as an unflavored option, to suit any palate and pre workout flavor.

Sparta Nutrition has been stepping up its flavoring games as of late, which means you should be in store for some more tasty pre workout options with Kraken Pump. In total, Sparta’s new stim-free pump supplement will come in 4 different flavors:

The Kraken has found its mate!

Kraken Pump has all the makings of an effective stim-free, nitric oxide boosting pre workout. Enhancing your pumps from multiple fronts, couple with the open label, makes Sparta Nutrition’s newest pre workout a must try venture.

We’ve got some on the way, so be sure to tune in when we post the full-blown review on our YouTube channel!