Heroes of the sports supplement industry — Ghost Lifestyle — have announced a partnership with Heroes in a Halfshell, the Teenage Mutant Ninja Turtles! This is a collaboration like no other, with four different Ghost supplements getting a new “Ooze” flavor, inspired by the pop culture classic cartoon. 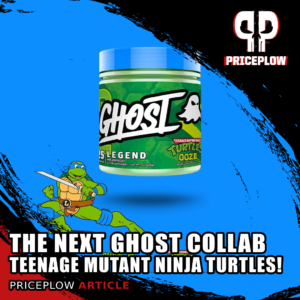 Ghost is partnering with the legendary Teenage Mutant Ninja Turtles in four supplements with a new OOZE flavor!

This is a follow-up to the recent Ghost Space Jam collaboration, which included two new Ghost Legend pre-workout formula variations. With the “TMNT” collab here, we instead have a single new flavor for four different Ghost supplements — each tied to one of the four Ninja Turtles. As opposed to Space Jam’s formula variations, the supplements are available in their original labels, but one of these supplements is new to the line.

It’ll be available through Ghost’s website, but GNC will also be in on the collab if you want to get in on the action as soon as possible.

Each of these four supplements is tied to a different Ninja Turtle, which we’ll explain below. But it may be easier to watch our video, since there’s a lot to put together here, especially if you’re unfamiliar with this classic kids cartoon:

Who are the Teenage Mutant Ninja Turtles?!

Abbreviated as TMNT, the Teenage Mutant Ninja Turtles are an entertainment series launched in 1984 that found their way to insane amounts of popular success by the late 1980s. They began as a comic featuring four turtles who were exposed to radioactive ooze that turned them into muscular, human-sized turtles. 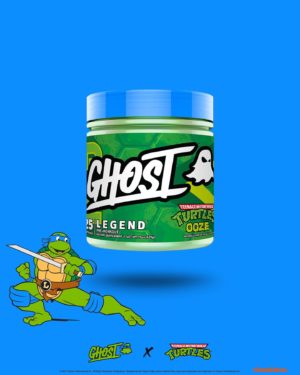 Trained by a rat named Master Splinter, they go on to fight crime in New York City (where they live in the sewers). Their arch-nemesis is Master Shredder, the leader of a gang named The Foot.

Once adapted to a cartoon, the entertaining Ninja Turtles became a massive pop culture classic. Anyone who skirts the borders of Generation X and Millennial should be very well aware of the original cartoons, whose epic theme song can still be sung by millions of fans. Beyond TV, TMNT was also made into action figures, movies, video games, additional animated series, and all other types of entertainment that have grossed billions of dollars.

All four supplements come in the Teenage Mutant Ninja Turtles OOZE flavor, but with a different colored lid denoting a different Turtle collab:

Sign up for alerts on our Ghost news page so you don’t miss any news!

Radioactive ooze is how the turtles became the Teenage Mutant Ninja Turtles, and it’s the flavor that’s going to power your workouts or gaming endeavors — sans radiation. It can best be described as a “juice box” type flavor that has components of citrus, namely orange and tangerine… only made a bit more “green” to mimic that ooze!

A note on the pizza boxes

The products were shipped to Ghost’s athletes, influencers, athletes, and media partners in pizza boxes because the Ninja Turtles love to devour a massive pizza (a well-known physique destroyer common to the @ghostlifestyle Instagram channel).

We were honored to visit Ghost Lifestyle HQ for this incredible launch, and had many pivotal scenes in the latest Building the Brand Episode. Watch on Ghost’s channel below: 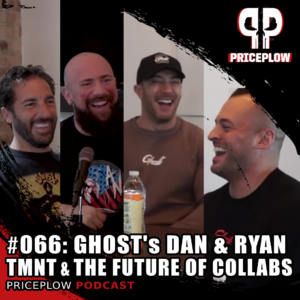 On April 18, 2022, Dan and Ryan invited Team PricePlow to Chicago to launch this collab. We talk about this launch, the rise of Ghost, their GNC and Anheuser-Busch partnerships, and the future of these collaborative efforts on Episode #066 of the PricePlow Podcast with Dan and Ryan. This is a must-listen episode for supplement industry fans and employees.

Heroes in a half shell… turtle power!

As supplement industry gurus who grew up with the Ninja Turtles, Dan Lourenco and Ryan Hughes have been working on this collaboration for quite some time. There are too many collaborations to list, but some highlights include Sour Patch Kids and Swedish Fish, Chips Ahoy!, and Oreo. The recent Space Jam effort is a bit more similar, since there’s not a flavor to mimic, but instead a look and feel.

The four products selected are absolutely perfect, and we’re extremely excited to have the UK version of Legend in America. We’re equally excited to talk about Ghost Gamer Non-Stim, because sometimes we need a flavorful late night friendly nootropic without the caffeine.

The only question is if this collab will go further… because we have some ideas for a Master Shredder inspired version of Ghost Burn Black.