Posted on November 17, 2022 by PricePlow Staff | No Comments

Fungi is all the rage. And what’s not to love? They grow like … fungus… and have a truly staggering array of nutritional properties that get the body, and brain, kicking in high gear. Today, we’re introducing you to Fungies, a truly unique mushroom-based (yet delicious and naturally flavored and colored) gummy supplement. 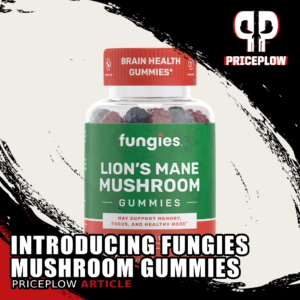 Try out the coolest way to get extremely beneficial mushrooms into your diet: gummies!

For the longest time, mushrooms were slept-on in the supplement industry. Mushrooms typically aren’t the first things that come to mind when you’re trying to build a supplement stack to optimize your body, mind, and general health.

Luckily, that’s changing. The incredible properties of certain varieties of mushrooms are starting to hit the mainstream, and with that comes awesome new delivery formats.

Our favorite by far is Fungies – super-healthy fungus cooked into delicious gummies.

Healthy and sweet? Can it be?

Rob Kaufman, co-founder of Fungies, has had a long tenure in the health and fitness space. He became well-known in these parts for his passion for biohacking. Kaufman’s already made waves with his other brand, SteelFit, which we’ve covered on PricePlow extensively.

One of his favorite biohacking substances is mushrooms. Specifically, those that have loads of research and thousands of years of anecdotal evidence backing their benefits for mental and physical performance. The big three are cordyceps, reishi, and lion’s mane (which we’ll dive into a bit later on).

The problem, like with so many things that are good for you is that old fashioned mushroom supplementation is less than ideal. Fungi are typically stuffed into gigantic capsules, boiled down into revolting tinctures, or not packaged in anything at all — forcing consumers to suck down a spoonful of terrible powders.

So Rob decided to merge the most tasty and simple delivery mechanism in the supplement world – gummies – with the awesome benefits of mushrooms. And so, Fungies was born. It’s the first of its kind. 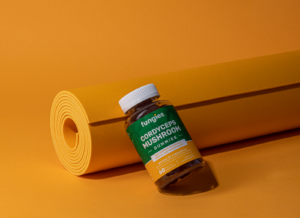 There are an estimated 2 to 4 million species of mushroom in the world. Granted, a large portion will kill you upon consumption, but the point is: there are a lot of mushrooms out there.

Guided by scientific and anecdotal evidence backing their efficacy, Rob narrowed down that rather lengthy list to three types of mushrooms. His goal was to identify fungi that promotes wellness in the body and in the mind. His all-start list of mushrooms are: lion’s mane, reishi, and cordyceps.

The three products Fungies developed out of the gate are composed of these three awesome species of mushroom.

We’ll get into each product below, but first, sign up for Fungies news alerts below:

At launch, the team over at Fungies released three gummy products, one for each of the core mushrooms we talked about above.

It’s mentioned in the intro but worth repeating – Fungies are naturally flavored and naturally colored.

We’ve found that natural flavors are superior to the most palates when the flavors are dosed strongly enough – and that’s certainly the case with these. No nasty mushroom taste inside, just powerful, sweet gummies with great texture!

A warm welcome to Fungies

As far as we’re concerned, the supplement industry’s lack of experimentation with functional mushrooms is shameful. Lion’s mane, cordyceps, and reishi, among other types of fungi, are backed by a young but promising body of scientific research, in addition to the veritable avalanche of anecdotal evidence going back thousands of years and preserved via oral tradition.

Until now, the options on the market for mushroom supplementation have been limited to absolute basics, like pills and powders.

Fungies decided to take these awesome natural organisms and alchemized them into a delicious naturally-flavored, non-gelatin, gummy. Mushroom gummies… We can’t wait to take them for a spin. 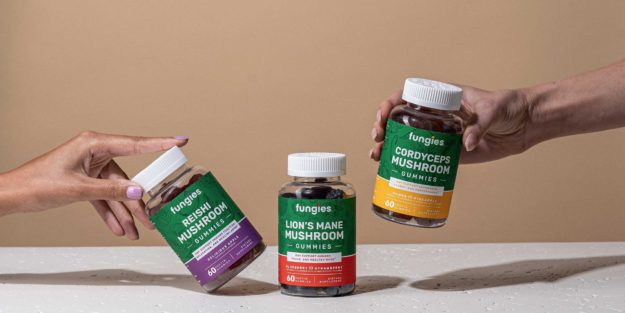