The number of times we’ve heard that carbs are to blame for everything under the sun, including economic recessions, is simply mind boggling. In reality though, carbs are not the enemy, when consumed appropriately, they are a powerful ally in your war against the weights and can be the difference between hitting a new PR and bonking midway through a set.

Alas, given the manner in which carbs have been portrayed has left them with a rather sullied reputation. People would rather limit their gains potential out of fear that a few extra carbs may make them gain fat. But, the days of being ultra-carbo-phobe are over thanks to Blackstone Labs.

The brand has developed the ultimate nutrient partitioning agent in Glycolog, which uses a novel blend of ingredients to put carbs in their proper place once and for all! We noticed it because of how much it sells, so we had to see why so many people love using it.

We’ve got all the info ahead, but first, make sure to check the best deal and sign up for alerts from PricePlow:

Blackstone Labs has pulled out all the stops for the design of Glycolog. They’ve included a comprehensive spectrum of ingredients to enhance nutrient partitioning and regulate how your body handles carb and amino acid delivery to your muscle tissue.

Note: Doses listed below are based on 1 serving (i.e. 3 capsules). 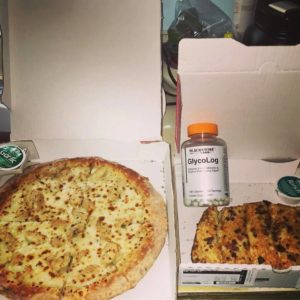 Glycolog allows you to crush some serious pizza and still keep your 6-pack.

Blackstone Labs recommends consuming 3 capsules twice per day, taken with your two biggest carbohydrate meals of the day. Do not exceed more than 6 capsules in a 24 hour period.

We’ve said it before and we’ll continue to say it — properly-timed carbs are NOT the enemy!

However, if you’re not one of the genetic elites, and your body doesn’t deal with carbs the best, it may help enhance your gains and limit fat storage by investing in a quality GDA / nutrient partitioner. Glycolog offers one of the best all around options that’s been well received by the masses and continues to be a staple for those looking to continue to crush their carbs but not crush their scales.