Anabolic Warfare’s Project Muscle has muscle and fat-shredding supplements of all varieties, and has been a major hit since their release in 2022. In past articles, we discussed the popular anabolic compound turkesterone, which is extracted from Ajuga turkestanica, the sole ingredient in Project Hulk. 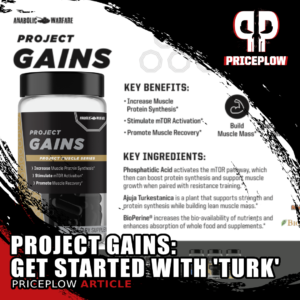 Thinking about trying out the turkesterone waters? Anabolic Warfare’s Project Gains is a great way to get started!

But jumping head-first into a supplement like Project Hulk isn’t for everyone. Many athletes or athletes who are a bit more on the conservative side want to give the anabolic a shot, but perhaps at a lower dose. All the better to include some other anabolic-supporting substrates.

That’s exactly what we’re getting into here:

With Project Gains, Anabolic Warfare gives you a unique “natty” option to test the waters of turkesterone, at a more moderate dose. It includes 200 milligrams of A. turkestanica standardized for 10% turkesterone, which is more in line for users who aren’t yet on “Project Hulk” level.

It’s backed by a dose of mTOR-boosting phosphatidic acid and testicular support agent D-aspartic acid, giving the body some added tools to build muscle alongside the anabolic turkesterone-containing plant extract.

If this sounds like good way to get started, we dig into the science below:

In a single 3-capsule serving of Project Gains from Anabolic Warfare, you get the following:

Conclusion: A great way to test the turkesterone waters

The major ingredients in this formula are promising. “Turkesterone”, the industry’s highly misleading name for whole-plant extracts of Ajuga turkestanica (Anabolic Warfare is not guilty of conflating the two, though), may even prove to be a blockbuster, history-changing ingredient in the future.

The research on turkesterone is far from conclusive, but we’re already very confident in the ecdysterone within A. Turkestanica as well as its other constituents – and those likely make up even more of the supplement in the first place. 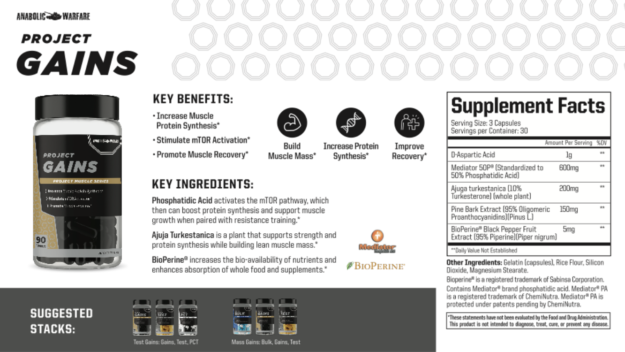 Project Gains is for a consumer who’s interested in experimenting with the cutting-edge of nutritional supplementation, but at beginner’s doses that will allow you to assess if you want to go further. And if you see or feel any level of results, it’s time to setup up to Project Hulk after that.