5-Percenters asked for it, and they got more than what they asked for — a 5% Nutrition Turkesterone supplement with added ecdysterone!

Legendary bodybuilder Rich Piana believed that only 5% of the people on the planet had the grit, talent, and motivation to realize their potential and become the best possible version of themselves. 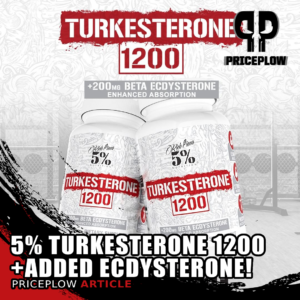 5% Nutrition Turkesterone 1200 goes above and beyond, with a huge 1200 milligram dose of turkesterone and added ecdysterone with absorption enhancers!

Wanting to help those high-achievers — the extraordinary 5% — push themselves to the next level, Piana set out to create supplements of uncompromising quality and efficacy.

Ever since, the culture of 5% Nutrition, the company Piana launched, has emphasized perfection in all things. It’s no wonder, then, that 5% Nutrition is the company moving the state of turkesterone supplementation forward after their hit 5% Nutrition Test release.

Turkesterone 1200 is the first product we’ve seen to address some long-standing problems associated with phytoecdysteroid use. The approach 5% Nutrition takes distinguishes this product from the pack and raises the standard for turkesterone supplements.

Reason being, they’ve added more to it — with extra ecdysterone — another anabolic phytoecdysteroid that will stack incredibly with the main ajuga extract’s turkesterone.

In a single 4-capsule serving of Turkesterone 1200 from 5% Nutrition, you get the following:

5% Nutrition is actually pretty specific about this — Take 2 capsules daily with a high-protein meal! Take it at the same time each day.

If you do AM/PM dosing, you can split it up into 1 capsule each, but keep it with a solid protein source each time.

Turkesterone 1200 is probably the best entry into the turkesterone market that we’ve seen yet. It’s formulated to solve specific problems with phytoecdysteroid supplementation, like low oral bioavailability, and includes an extra dose of ecdysterone, the most studied and proven phytoecdysteroid.

It’s clear that 5% Nutrition went a bit above and beyond with this formula – there have been a few “me-too” turkesterone supplements to compete with, so they decided to step it up. While the competition’s formulas are doing well and giving great results, we love that 5% added extra ecdysterone and a few more absorption mechanisms above and beyond a large dose of AstraGin.

Our final comment is that this may feel extra good if you stack it with 5% Nutrition’s Test, which is a natural testosterone booster with some pretty legit dosages of well-researched ingredients. These two stacked together may not put you at Rich Piana’s “supraphysiological” levels, but their combination is quite powerful for being a full-on legal natty stack.