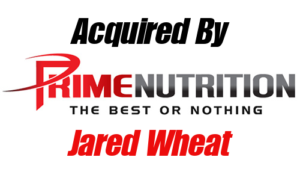 Controlling shares of Prime Nutrition have been Acquired by Jared Wheat, hereby putting a COMPLETE END to any drama.

It’s been an extremely dramatic few months for Prime Nutrition, but that’s all about to come to a smooth landing and happy ending thanks to supplement industry baron Jared Wheat, owner of the Hi-Tech Pharmaceuticals empire.

Today, it was announced that Jared Wheat has bought controlling shares of Prime Nutrition, the supplement company formerly co-owned by Aaron Singerman, PJ Braun, and the Duracap Labs founders.

This marks the ninth supplement brand that the enterprising Wheat now either owns or co-owns. To recap the last two years:

This expands the Jared Wheat empire to the following brands:

Given that Aaron Singerman (who’s currently focusing on RedCon1) is still on board as shareholder, it’s extremely likely that Wheat bought PJ Braun’s shares as well as those from the team at Duracap Labs. This raises the next question:

Singerman’s status: back on board as a managing shareholder

Aaron stopped working with Prime in May of 2016, but still maintained the non-managing shares of the company. His role changes today. We reached Aaron for a quick comment:

I will be active. I’ll be in charge of all marketing.

Note that Mike at PricePlow and Aaron are due for a good long Skype interview that will be on YouTube. We plan to focus on the brands and entrepreneurship in general. Stay tuned!

John Meadows weighing options, may remain active with the brand

We were also told that John Meadows could remain on board with Prime Nutrition, but that’s to be determined soon:

Hello guys, just an FYI, I am exploring all my options, and will make the best decision I can in the coming weeks on what to do next.

Product quality is a necessity at Hi-Tech

Getting back to business, all of the above brands’ products are now manufactured in Hi-Tech Pharmaceuticals’ FDA-audited and regularly inspected facility, and that will now include Prime Nutrition as well.

Because of the manufacturing integration at Hi-Tech, you can rest assured that moving forward, all Prime Nutrition supplements manufactured at Hi-Tech will meet label claims. Wheat’s facilities are as strict as they come, and they literally have to be out of necessity, given hiscontinued battles with the FDA.

Intra-MD EAA+ to be recalled by Duracap Labs

Currently outstanding is the issue of certain batches of Intra-MD EAA+ potentially failing label claims. We have been promised will receive a full recall, performed by Duracap Labs.

The man behind Mountain Dog Training and Prime’s “MD Series”, John Meadows. We’re excited to hear about his future plans!

For the time being, any customer dissatisfied with Intra-MD EAA+ is eligible for a full refund. To claim your refund, send an email to cs@primenutrition.com with a Title of Intra MD-EAA+ Recall. It’s probably best to include the Lot Number and any other information in your email.

We say potentially failing label claims because we’ve been told that Theacrine is very difficult to test for, and we have no repeat-verification or chain of custody on the failing product in question.

However, glycerol is easy to test for, and given that a recall is indeed moving forward, there’s a solid chance the ingredients were off in some manner. So get your Intra-MD EAA+ refunded, and if you’ll have Prime Nutrition back in your life, you can rest assured that no Hi-Tech manufactured supplement will fail label claims moving forward.

The first paragraph of the press release has what you need to know:

Prime Nutrition will also get back to innovation with the re-launch of several reformulated versions of its flagships like Redux, Intra-MD, and PWO Max.

Prime Nutrition also plans to launch several more groundbreaking products in the months to come including a new patented hydrolyzed whey protein, and a new USDA Prime Beef protein. Prime Nutrition will also launch a series of diet aids to help the 70.7 Percent of adults over the age of 20 that are either overweight or obese in an effort to make the Prime Nutrition Brand Great Again!

Now for a brief commercial break where you can sign up for alerts on Prime Nutrition supplements (since so many new ones will be coming), and then to the backstory:

On November 6, 2016, Mike interviewed Aaron to discuss how things had been going, and also touch upon Prime Nutrition, Blackstone Labs, and others:

We’re not going to get too deep into the drama because there’s too much finger-pointing going on to figure out what on earth really happened.

The long story short is this:

Papa Jared is going to make it all better.

Mike’s commentary on YouTube will come, but it will have nothing to do with the companies – it will be about entrepreneurship in general. The fact is that once Hi-Tech has taken over something, product quality basically becomes a non-existent concern — and we try to stay most focused on quality here.

With that said, you deserve the right to see some of the things said. So here’s what we found in a little timeline:

All we’ll say is that whatever the past may be, this kind of business does not happen under Jared Wheat, so you can 100% consider it a thing of the past.

We look forward to seeing what Singerman and Wheat can do together in the coming years, and are excited to move forward with legitimate products that fully pass spec.

You can sign up for Prime Nutrition alerts below, it sounds like there will be several new products on the way: