Posted on April 11, 2022 by Mike Roberto and Nick Andrews | No Comments

Over 2,000 years ago the ancient Greek physician, Hippocrates — namesake of the Hippocratic oath — wrote, “All disease begins in the gut.”

Probably radical for its time, especially considering that Hippocrates is considered to be the founding figure of medicine. 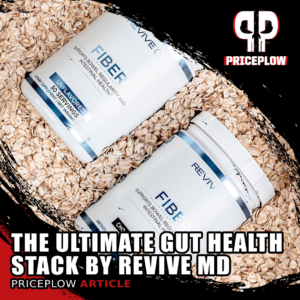 Given the ultra-processed nature of the standard American diet (aptly referred to by its acronym, SAD), it’s not a surprise to many people in the know that gastrointestinal illness is increasingly common in the United States.

Unfortunately, digestive disorders are also fairly common — at least 11% of the US population suffers from one.[1] This number is likely a lot higher, though, because researchers have found that inflammatory bowel syndrome (IBS), the most common digestive disorder in the US,[2] goes undiagnosed in more than 75% of those afflicted.[3]

As of 2018, we’ve reached the point where a whopping two-thirds (over 60%) of Americans are suffering from at latest one digestive disorder.[4]

As the incidence rates of diabetes, cardiovascular disease, and obesity continue to climb, it seems more certain that the ancient wisdom of Hippocrates is evermore vindicated with each passing day.

Our strategy is two-fold: 1. Remove the insults (generally ultra-processed foods with inflammatory seed oils), and 2. Feed your gut the weapons it needs to keep you healthy

This state of affairs is both shocking – and unnecessary.

We at PricePlow are constantly begging readers to eliminate the most blameworthy culprits for digestive disease — the omega-6-laden “seed oils” (erroneously labeled as “vegetable oils”) that are responsible for the biggest increase in Americans’ excess calories over the last 50 years.[5,6] They’re extraordinarily pro-inflammatory[7] and studies have demonstrated how they wreck the human gut microbiome.

Thankfully, many of you listened and removed these rancid oils from your diet, and reported great benefits from doing so.

But sometimes, when the damage is already done, you may still need some help getting back to optimal health.

A gut health stack to fight back with

Whether you’re someone with a compromised gut, or someone with a healthy gut who just wants a good insurance policy against future disease, this is where the Revive MD Gut Health Stack comes in.

Today we’re going to highlight five phenomenal supplements formulated by Revive MD—every single one can provide substantial, complementary contributions to your efforts at regaining or maintaining the health of your digestive tract.

If you want to read our in-depth write-ups of these products, follow the links below:

If your gut’s in a seriously bad way, this stack attacks it from multiple angles – including repair and regrowth – and can help you better digest your food moving forward. We’ve never seen a brand focus so heavily on a problem, but it’s a problem worth attacking aggressively — which does require quite a few supporting ingredients.

Read on for a condensed summary of the product line below. It all starts with fiber:

Overall, Revive MD’s probiotic is a different spin on a category that’s been worn-out and perhaps not as effective as many would like it to be. We believe that a focus on probiotics without removal of the metabolic insult (generally ultra-processed foods) will be for nought, but when used alongside a cleaner diet, improvements anecdotally seem to be made more expeditiously.

This six-product digestive health stack from Revive MD covers pretty much all the major digestive bases except for direct probiotic supplementation – although several of the ingredients in these products will indirectly improve the composition of your gut flora by various mechanisms. 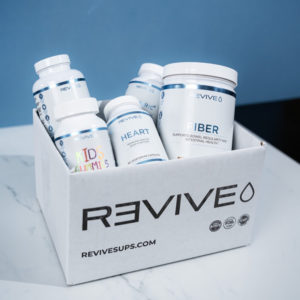 Revive MD has an incredible, third-party tested product line, going well above and beyond supplements.

We understand that this is a lot to take in — sometimes you can simply use more fiber and a bit of digestive support from Digest Aid. But other times, you’re in a seriously nasty situation, and need to throw restorative ingredients at it. This is where GI+, Gut Health+, and Glutamine come into the picture.

Ultimately, we have to recognize that we didn’t have such horrendous digestive problems a couple generations ago. Some people did, but nothing to this extent. Something has clearly changed, and that something is also changing you. It’s time to fight back, but that means serious changes and cooking your own food.

So, on top of fighting for better gut health using the above supplement stack, we always recommend removing modern foods that your great grandmother wouldn’t have seen in her childhood, and getting back to the pillars of ancestral eating – animal fats and organ meats included.

But to help repair the damage done, Revive MD and its team of professionals run under Dr. Domenic Iacovone and Matt Jansen have quite the stack here for you.