Revive MD Fiber: A Fiber Supplement with the Best of Both Worlds

We’ve come a long way these past few years in the sports nutrition corner of the supplement industry. Thanks to the two visioneers who run Revive MD — Dr. Domenic Iacovone and Matt Jansen — health support supplements have been made cool again. Not only that, they’ve been made efficacious, with massively packed formulas to support your health and wellness goals. 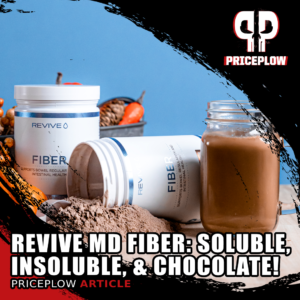 Introducing Revive MD Fiber, which has both soluble and insoluble fiber, and comes in a delicious chocolate flavor!

We recently covered their digestive enzyme blend in Digest Aid, which could be used to support their GI+ gut health supplement alongside Revive MD Glutamine. One key part of this gut and digestive health puzzle was missing, though: Fiber.

This week, the team introduced Revive MD Fiber, a new fiber blend that gives its users 7 grams of dietary fiber per serving. This supplement was designed to support bowel motility and healthy intestinal function. Even better, it was released in both an unflavored and chocolate flavor!

What’s unique about it, on top of having a chocolate flavor available? It’s using oat fiber alongside the psyllium husk.

We dig into the formula below, but first, see PricePlow’s Revive MD News alerts, as they’ve just been named our 2021 Breakout Brand of the Year alongside Raw Nutrition, and we expect tons more this year: 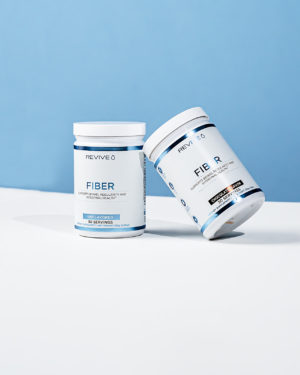 Prior to launch, Revive MD teased this image, showing the world that they’d have a chocolate flavor

Each scoop of Revive Fiber yields the following:

Fiber is an incredibly important type of carbohydrate that’s generally defined by molecular composition and non-digestibility.[1] There are many types, but they’re most often broken down into two forms:[2]

Most fiber-containing foods contain blends of fiber, and the gastrointestinal tract tends to ferment soluble fiber faster than insoluble fiber.[2]

The benefits of fiber

We’ll briefly gloss over the benefits of fiber, but for a more detailed read, the 2020 article recently published in Nutrients titled “The Health Benefits of Dietary Fibre” has a great modern overview, which cites not just standalone studies, but numerous meta-analyses also cited below:[4] 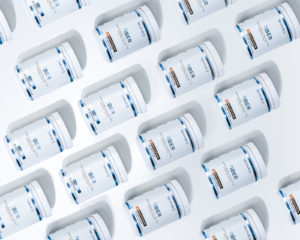 You won’t need all of these bottles, but one of each isn’t a bad idea!

Each of the studies cited above looks at various mechanisms, but most of them seem to be downstream of the fact that fiber helps the gut ferment short-chain fatty acids (SCFAs),[18,19] which have incredible benefits ranging from anti-inflammatory activity[20] to a heart-protective reduction in TMAO (Trimethylamine-N-oxide).[21]

The point being this: if you’re on a moderate or high-carbohydrate diet, you’re wise to keep fiber in the diet,[4] and getting nearly 30 grams per day is no easy feat. That’s where Revive MD Fiber can help:

Two primary ingredients to discuss – oat flour and psyllium husk — and then we’ll discuss the other ingredients, because even the unflavored version has some sweetener added!

Per the label, use one scoop with 8-10 ounces of water daily, or as recommended by your doctor. If you let it sit too long, the psyllium husk will gradually absorb water and become more gel-like, so get it down sooner than later and let the husk do its work in your body, not in your shaker cup. 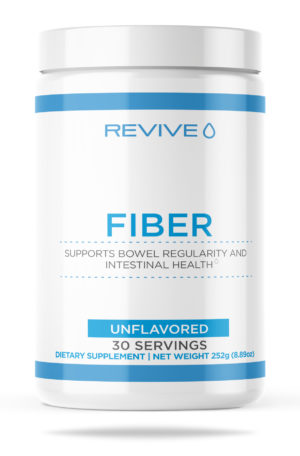 Just in case Revive MD comes out with other flavors, they’ll be listed below:

This honestly shouldn’t be anything that earth-shattering, but here we are in 2022, and we finally have a dietary fiber supplement that brings two worlds together. Far too often, dietary supplements have only relied on soluble fibers like psyllium husk. And while those are great, there’s something to be said about the added benefits of blending in an insoluble fiber as well.

Oat hull fiber makes a tremendous addition, given its extremely high insoluble fiber content, providing a more “broad spectrum” for Revive MD users. All the better that we have a chocolate option too!

You can consider this the latest member of the Revive MD Gut Health, which also includes GI+, Digest Aid, and Revive MD Glutamine. Do you need them all? That depends on your situation – some readers just need more fiber to go along with all of those non-fibrous carbohydrates. But if your gut is in a bind, then take a look at the stack above and see how the month treats you. The proof will be in the pudding!!!