UPDATE: We’ve spoken to the representative mentioned below at Olympus Labs who assured us that they are doing everything possible to contact all customers who received the overdosed Dragon’s Mist flavor of Re1gn, or have the retail store contact them.

Our current conclusion on the situation is that this is a well-formulated (yet edgy) product (now discontinued) that had a terrible manufacturing batch and initially abysmal (and potentially dangerous) communication regarding the situation. Those issues are being addressed, and the customers are being contacted.

We must at least caution that anyone who has issues with ingredients similar to yohimbe should probably avoid this supplement, or use an extremely small dose to assess first. There is no yohimbe, yohimbine, or yohimbenine as previously postulated, but it does seem to have something like a “cousin” alkaloid that may give similar effects.

We thank the team at the online store Suppz for expediting this process and contacting customers who received the Dragon’s Mist flavor.

Shortly after, several users notified us of serious side effects when using the product, which included cold sweats, anxiety, shaking, sexual performance issues, nausea, and vomiting. The majority of problems came after using the flavor known as “Dragon’s Mist”, discussed in greater detail below. 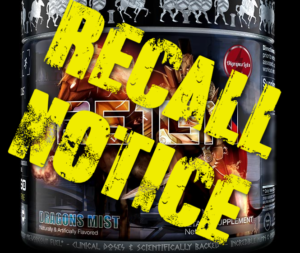 After weeks of serious complaints of the Dragon’s Mist flavor, Olympus Labs has decided to perform a recall – but many consumers are yet to be contacted.

The voluntary recall was announced on 8/20 on page 302 of a discussion forum thread from 2015. Customers can email Olympus Labs for an exchange from the next batch.

UPDATE: ALL customers have now been contacted!

Since the entire batch in question was sold entirely through Suppz.com, Olympus Labs asked Suppz to email all customers who bought the Dragon’s Mist flavor. This has already been done and and they have offered a refund or exchange, paid for by Olympus Labs.

Prior to this post, Suppz has already been giving refunds on a per-complaint basis (customers can send the product back and get a full refund). They are allowing buyers to either swap the tub out for a different flavor or to get their money back entirely after sending it back.

Long story short, if you have an initial batch of Dragon’s Mist Re1gn, contact either Suppz or Olympus Labs to get it refunded or exchanged (contact info at link here or just reply to the Suppz email sent).

Will there be an official FDA recall?

A representative for Olympus Labs stated the following:

“We do not have to issue a recall through the FDA as no law was broken.”

How pervasive is this issue?

So far, Suppz has told us that there hasn’t been an “epidemic” of complaints, but the returns have been in the “dozens”.

The issue seems to stem from the fact that this batch was noticeably stronger than the other flavors (as admitted by OL representatives below), and that some users seem to be experiencing a sensitivity to one of the ingredients whose standardization is not fully disclosed.

(In general, we’re recommending users who do not like yohimbe to steer clear of this, or at least start with a *very* small dose to assess).

These issues were originally discovered on the AnabolicMinds.com discussion forum (here) with several complaints throughout other Olympus Labs threads on the same site (here, here, here, here, amongst others). Users on our Facebook thread reiterated the same issues.

Outside of the Dragon’s Mist flavor, most users highly enjoy the product, especially those who are fond of extremely heavy stimulants and like ingredients similar to yohimbe. The product is indeed getting rave reviews outside of the issues above, as those forum threads show.

After such complaints, Olympus Labs originally began “looking into the potential for a QC issue“, then repeatedly stated that GMP regulations allow for a 10% overage or 10% underage on ingredient dosing, claiming,

“That 10% that we the manufacturer are allowed may just be the difference and determining factor at play here”.

An Olympus Labs representative also stated in a video that “yes, you guys are right, Dragon’s Mist is a ‘tad bit more intense’ than the others”.

Olympus Labs claims that “every ingredient in it has been third party tested“, but we are yet to see confirmation that each outgoing batch was tested to ensure safety and consistency.

The company of course has no requirement to share these tests, with one representative telling us via email,

“We have all lab tests, but we are under no obligation to provide anything”

Is it yohimbine or yohimbenine? (no!)

Although the reported side effects are consistent with an adverse reaction/allergy to yohimbine, and several users have even compared the effects to yohimbine, a representative for Olympus Labs stated via email that the product does not contain yohimbine or yohimbenine.

The yohimbine/yohimbenine theory was postulated because those two compounds are indeed found in C. Macroceras, the plant from which “Stim-X” has been extracted. We are still unsure what Stim-X is standardized for and Olympus Labs will not disclose any more information on the matter.

For now, all we know is that it is extracted for “alkaloids”, but they seem to be close enough to “cousins” of yohimbe that you should be cautious if you’re yohimbe-sensitive.

Future batches should have tighter tolerances

Unanswered questions: “Why wasn’t the issue caught sooner by lab tests, as opposed to hearing about it from violently ill customers?”

From the same Olympus Labs representative:

Do you understand the definition of violently ill? We have toxicity testing on what is in our product and the ingredient stim x has a study with over 2 GRAMS being used in a human without them being hospitalized for being “violently ill”

We are awaiting the answer to the actual question (“what was in that batch and how did it possibly make it out the door?”), but have now additionally requested that Olympus Labs provide the study citing 2 grams of material without hospitalization, along with any outgoing batch tests proving <10% overage.

Will there be an announcement about this recall on the official Olympus Labs website or on Olympus Labs’ social media?

It seems like the answer will be “no”, but since all customers who bought the product through Suppz have now been contacted, we believe satisfactory attempts have now been made.

Prior to the Suppz email, all recall notifications have been discussed inside of existing forum threads on other websites, were completed on a per-request basis, or were discussed on our social media.

Their representative emailed us stating,

There is no point in a public recall if literally only one point of sale existed and we have their info.

Why the long delay between the initial forum comment mentioning the recall and now?

Per the Olympus Labs representative,

“Recall is being done when we have the product (within a week or two) so we can offer them a shipping label to send product back and receive a free placement with no cost to ANY customer (so this includes international).”

Who did the manufacturing for this product and where are they located?

Olympus Labs is under no requirement to disclose this, but we’d of course love to know. Manufacturers are almost never revealed by supplement companies, unfortunately.

This post has been updated to reflect our satisfaction now that the tree has been shaken and Suppz has contacted all customers of the Dragon’s Mist flavor.

We would still love to know what exactly Olympus Labs is putting in this product, and would love to see the aforementioned toxicity data, but we understand that this is their trade secret and they are under no legal obligation to do so.

So long as everyone is aware that Re1gn is not suited for anyone who doesn’t do well with yohimbe, we stand by this post and are glad we helped expedite the recall process.

As always, users are wise to use a food scale with all powdered supplements, and to begin with half doses of stimulant-containing products.

Note: Our forums are still not ready and blog comments are disabled until then, but this post can be discussed here on Facebook.